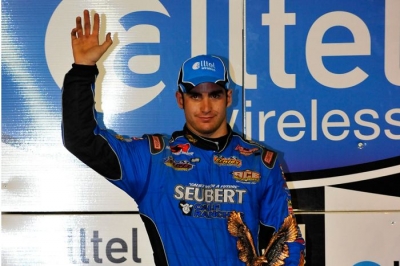 BARBERVILLE, Fla. (Feb. 13) — Josh Richards made the press members who recently voted him the overwhelming favorite to win the 2009 World of Outlaws Late Model Series championship look very good with a victory in Thursday's 50-lap season opener at Volusia Speedway Park. But even after receiving 17 of 24 first-place votes in the second annual WoO Pre-Season Media Poll and capturing the tour’s lidlifter for an unprecedented third consecutive year, Richards isn’t looking ahead at a potential title.

“It’s way too early,” the 20-year-old Richards said when asked about championship possibilities while signing autographs for fans following Thursday night’s Alltel DIRTcar Nationals by UNOH program. “I think October is too early (to think about the points). We’re just gonna race, not try to force too much, do our best and maybe get it.”

Richards is honored to be considered the favorite for the $100,000 crown, however.

“That’s pretty crazy,” said Richards, who recorded his 50th career WoO heat-race win on Thursday night. “It’s awesome that everybody expects big things from us. Hopefully I don’t let everybody down.

“I know our equipment is awesome and we have an awesome crew, so as long as we stay focused and work together as a team, I think we can pull it off.”

Darrell Lanigan began his WoO title defense Thursday with a familiar face back at his side in the pit area: his former chief mechanic Randall Edwards, who worked for Lanigan off-and-on from 2001-2003 and full-time from 2004 through the middle of the 2007 season.

Edwards, 34, has returned to lead the Union, Ky., star’s effort after spending the 2008 campaign with the Bobby Labonte Motorsports team and driver Earl Pearson Jr. The Louisiana native replaces Chris Burton, who was voted the 2008 WoO Crew Chief of the Year in his only season with Lanigan’s operation.

The Lanigan-Edwards pairing has certainly clicked so far in 2009. Lanigan’s second-place finish was his third bridesmaid run in four events during the Alltel DIRTcar Nationals by UNOH, proving that the reigning champ’s off-season moves have kept him at the top of his game. He debuted all kinds of new stuff at Volusia — a Rocket car, a Cornett Chevy engine program (after more than a decade using Cornett Fords), an Integra Shocks deal and a gorgeous, sparkling black hauler and trailer.

Babb's back on track

Making his debut with a self-operated team backed by Sheltra Motorsports, Shannon Babb struggled with “new-car blues” during the first three nights of the Alltel DIRTcar Nationals by UNOH. But after making a motor change on Thursday afternoon — a switch suggested by his teammate Patrick Sheltra, the 22-year-old ARCA and Dirt Late Model driver whose plans to compete at Volusia were ended by the fractured vertebra he suffered in an ARCA crash on Feb. 7 at Daytona International Speedway — Babb’s Rocket car was reinvigorated. He led the feature's first 13 laps and finished a strong third.

“We were just trying to find the right combination,” said Babb. “Patrick (who was in attendance Thursday) gave his opinion that we probably had another motor that was better, so we put it in the car. It’s a Darge engine with a little different head style. It’s a little more aggressive engine — we went with it thinking there would be water down (on the track) with a cushion, and we were right.”

Babb, 35, of Moweaqua, Ill., finished sixth in the 2008 points standings in his first season as WoO regular, but he’s not planning to chase the entire tour in ’09 after leaving the Bowyer Dirt Motorsports operation and basically launching a new team out of his own shop with the help of Sheltra Motorsports and Petroff Towing, among others. He does, however, expect to enter several early-season WoO events, including at Deep South Speedway in Loxley, Ala. (March 13-14).

Volusia’s action prompted Steve Francis and car owner Dale Beitler to bust out a Rocket that sported a new graphics scheme, not something drastically different from the team’s 2008 style, but a “throwback” to what Beitler’s machines looked like when Pennsylvania star Gary Stuhler drove for him a decade ago. A sparkling blue No. 19 serves as the mount’s eye-catching centerpiece.

Francis kicked off the ’09 WoO season with a solid fourth-place finish on Thursday night, but he felt he could have placed even higher if not for a frustrating motor issue that plagued him throughout the evening. His powerplant stumbled on restarts, costing him time and positions that he had to fight to make up.

“The motor just has no acceleration on restarts,” said Francis. “It’s fine once we get rolling, but I can’t keep up on the starts. We’ve changed carburetors three times but it hasn’t helped, so it must be something electrical inside the car. We’ll go over everything (on Friday) and try to find it.”

Brady Smith began a season he plans to make his first as a WoO regular in ugly fashion: as a non-qualifier due to a heat-race accident.

Smith, 31, of Solon Springs, Wis., was battling for a transfer spot on the opening lap of his heat race when contact from Dale McDowell of Rossville, Ga., who was driving the No. 33 car steered earlier in the week by his team owner Clint Bowyer of NASCAR Sprint Cup Series fame, sent his Bloomquist Chassis No. 2 into the outside wall off turn four. His machine was towed back to the pit area with significant front-end damage and he did not report for the consolation race in a backup car.

Smith was also told by WoO officials that the series panel ruling on rookie eligibility denied Smith's request to follow the series as a rookie. Smith is a two-time WoO winner and a $35,000 winner of 2007's Knoxville Lucas Oil Nationals.

Reddick was one of the night’s big stories. Thursday night actually marked the first Dirt Late Model feature that he transferred into during his three-week debut stretch with the full-fender division in Georgia and Florida. With WoO regular Tim Fuller serving as his mentor, the fresh-faced teenager plans to chase the tour in his Incredible Pizza No. 11 after racing sprints and midgets last season.

Showing his rapid growth behind the wheel of a Late Model, Reddick qualified 11th-fastest in time trials on Thursday night and finished a solid third in his heat to make the main event. A large crowd gathered around Reddick’s car in the pit area to catch a glimpse of him after his preliminary-race success, and then he stayed out of trouble throughout the feature to gain valuable seat-time.