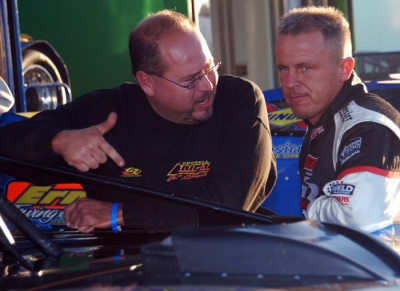 Chris Burton still can’t believe how magical 2008 was for him. Back as a full-time Dirt Late Model mechanic after spending three years away from the sport’s top levels, Burton helped guide Darrell Lanigan to a career-first World of Outlaws Late Model Series championship and was voted the tour’s 2008 Crew Chief of the Year.

“It was a dream year,” said Burton, who watched Lanigan roll to the ’08 WoO crown by a record points margin. “Darrell gave me a chance to go out on the road again and everything just clicked better than I ever could have imagined.”

A championship in his first campaign with Lanigan was mind-blowing enough for Burton. But earning the tour’s top wrench-turner award — by a vote of his fellow chief mechanics and series officials — left the modest 36-year-old even more speechless than usual when he accepted the laurels during the postseason banquet Dec. 11 in Orlando, Fla.

“I’m not much on words, which is kind of a prerequisite for the team I’m with,” joked Burton, alluding to Lanigan’s quiet, reserved demeanor. “But I appreciate this award so much. It’s a real honor. If it was up to me, all the guys who work on these crews would win this award. We all sacrifice a lot to do this, so it means a lot to know these guys think enough of you to give you that honor.”

Just as some observers were surprised by Lanigan’s ’08 title run (he had never finished higher than fifth in the standings over the previous four years), Burton’s emergence as the tour’s standout mechanic was slightly unexpected as well. But while Burton was new to Lanigan’s operation and had been absent from the national Dirt Late Model scene since 2004, he was certainly not unknown in the pit area when he joined Lanigan’s team two races into the season. He’s been working on dirt Late Models for the better part of the last decade.

A regular attendee of local dirt-track races with his family while growing up outside Cincinnati, Burton got his hands dirty for the first time when he began helping some friends with their go-kart racing after graduating from high school. Shortly thereafter he entered the Dirt Late Model realm, assisting locals Joe and Jimmy Stricker with their racing efforts.

Motivated to take a shot at toiling as a full-time mechanic, Burton got some help down that road from the Strickers in 1998. They phoned Rocket Chassis co-owner Mark Richards and asked if he knew of any drivers looking for a crew member.

“Mark checked around and then Steve Francis called me,” said Burton, recalling his first contact with a nationally-known racer. “I started going to meet Steve and his brother (the late Chris Francis) to help them on weekends (in 1998). That was the last year they ran with the STARS (Renegade) series, and then the next year they ran the Hav-A-Tampa (Xtreme DirtCar) Series and I got my first actual full-time job working with them.”

After one season with Francis, Burton spent part of the 2000 campaign working for Kentucky’s Thomas Ware. He was with Donnie Moran when the Ohio driver won the Eldora Million event in 2001, then moved over to assist Earl Pearson Jr. and the Dunn-Benson Ford team in 2002 and Hall of Famer Billy Moyer in 2003 (winning the UMP DIRTcar Summernationals title). In 2004 he traveled much of the WoO while maintaining Illinois car owner Larry Moring’s equipment, which Francis used in roughly half that year’s Outlaws events.

Burton pulled back from the rigors of the Dirt Late Model road in 2005, opting to remain in Illinois and take some non-racing jobs. “I regrouped myself,” said Burton, who kept his hand in the sport by helping some local racers in Illinois and Iowa.

Sufficiently recharged, Burton decided to get back in the game in 2008. He spent Florida Speedweeks helping Indiana’s Steve Casebolt, but upon returning home he spoke with Lanigan and received an offer he couldn’t refuse.

“I’ve known Darrell for a while and we talked here and there about doing some stuff, but we never really got together,” said Burton. “I finally talked with Darrell after Florida. He needed some help and I thought it was a helluva opportunity, because his (Union, Ky.) shop is close to where I’m from. All my family and my kids (Kyle, 15, and Lindsey, 13, both from an earlier marriage) are there, so working for Darrell meant I could move close to home and do what I love to do.”

Burton meshed seamlessly with Lanigan, who has been a WoO stalwart since the tour’s resumption in 2004 under the World Racing Group banner. Lanigan achieved an amazing level of consistency with his Fusion Energy-GottaRace.com Rocket cars, at one point stringing together a WoO-record 15 consecutive top-five finishes that signaled ’08 was going to be his season.

“Me and Darrell got along all year,” said Burton, who lives in an apartment in Florence, Ky. “Neither one of us says a whole lot, so I guess that kinda works. We talk when we need to. He does what he wants, I listen, and a little of what we both know goes together.”

Burton also gave credit for the team’s success to his fellow Lanigan Autosports crewman Thomas McDowell, who joined the team early in the season. McDowell isn’t returning to the operation this year, however, after starting a new job in December.

“Thomas came from working on modifieds, so he was new to Late Models,” said Burton. “But what he lacked in knowledge about the cars, he made up for with everything else he did — like work hard every night and drive the truck a lot, which helped keep me and Darrell a little more fresh.

“Really, once (McDowell) came along and started helping us, we started running in the top-five consistently. We had been running decent, but about that time we found that little extra to run up-front. I think having another guy got things to the point where Darrell could walk away, watch the track and make a little better tire choice.”

And of course Burton hailed Lanigan, not only for giving him the opportunity to rekindle his career as a dirt Late Model mechanic, but also pushing him to be the best he could be.

“I’ve been real fortunate since I started doing this that I’ve been able to work with some top guys like Darrell,” said Burton. “You might get your butt reamed a lot, but they drill the stuff in your head and you learn. You put that together with what you’ve learned from experience along the way, and it pays off in the long run.”

Now Burton’s challenge is to help keep Lanigan atop the WoO heap. They have spent the short off-season hard at work in the shop — making some changes to the cars, switching the team’s engine program from Cornett Fords to Cornett Chevys and organizing a new truck and trailer — to prepare for a run at a second straight title in 2009.

“It definitely will be tough to have another year like we did (in ’08),” said Burton, “but we’re gonna try.”