From team, correspondent and special reports 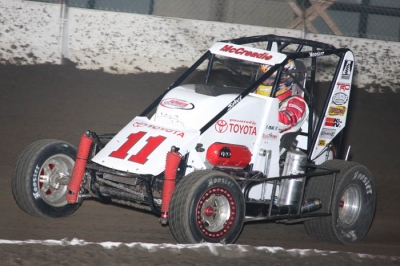 McCreadie, the 2006 World of Outlaws Late Model Series champion and one of 2008's hottest Dirt Late Model racers, has a fractured T3 vertabrae and floating bone fragments in his spine after his race car broke a rear axle and flipped violently over the catch fence at the fifth-mile dirt track inside the Quiktrip Center at Expo Square, according to the driver's website.

USAC official James Spink, a close friend of the 34-year-old McCreadie's, said the Watertown, N.Y., driver is "doing better" on Thursday but is "extremely sore." McCreadie was fitted with a back and neck brace and Tulsa physicians are awaiting consultation from orthopedic surgeon Terry Trammell of Indianapolis, Ind., a specialist in racing injuries who planned to review McCreadie's MRI, Spink told Roger Slack, the flagger for Chili Bowl competition.

McCreadie was setting a fast pace while leading Wednesday's first A Qualifier around the tight oval before his car's rear axle snapped, sending it sideways into turn one. The midget began a series of flips, eventually clearing the fence and landing on the concrete floor, where a shaken McCreadie emerged from the car, according to the Tulsa World.

McCreadie is expected to make a full recovery, but the length of time he’ll be sidelined from competition is uncertain. He had plans for a busy stretch of racing in Georgia and Florida over the coming weeks with his Sweeteners Plus Dirt Late Model team at Golden Isles Speedway near Brunswick, Ga., East Bay Raceway Park near Tampa, Fla., and Volusia Speedway Park near Daytona, Fla.

McCreadie, son of legendary big-block modified driver "Barefoot" Bob McCreadie, made his name in modifieds before moving in Dirt Late Models in 2004. After his 2006 season that included the Chili Bowl victory and WoO title, McCreadie dabbled in big-time asphalt racing as a development driver for Richard Childress Racing in 2007 before returning to Dirt Late Models full time in 2008 to capture the richest victories of his career, including $25,000 at Batesville (Ark.) Motor Speedway's Topless 100 and $40,000 at Knoxville (Iowa) Raceway's Lucas Oil Nationals.

McCreadie's accident came on the second day of competition of the 23rd annual winter event that drew 281 entries from 29 states and Canada, including drivers from a variety of racing disciplines. McCreadie was driving a car from the powerful Wilke-Pak Motorsports, which also fielded midets for USAC stars Dave Darland, Jerry Coons Jr. and WoO sprint car standout Terry McCarl.

Because Tim McCreadie doesn't have health insurance, friends including USAC officials Kevin Miller, Jason Smith and James Spink have made plans to collect donations for McCreadie's medical and recovery expenses. Donations can be sent to: