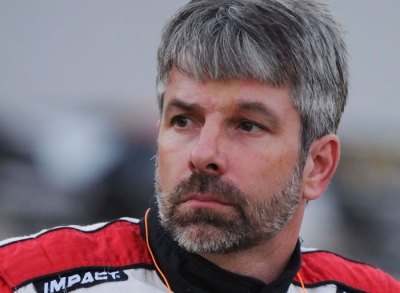 At most Dirt Late Model series banquets in recent weeks, champions stand behind the lectern at night's conclusion for a rambling speech dotted with thanks to sponsors and other mundane details, a delayed and anticlimactic end to last fall's racing season.

But the 85 people who gathered for the Southern Regional Racing Series banquet Jan. 10 in at the Murfreesboro, Tenn., Doubletree Hotel knew they were in store for something different. After all, two-time SRRS champion Byron Michael of Florence, Ala., was reuniting with many of his racing brethren for the first time since his wall-banging, brain-rattling racing accident Nov. 23.

Michael, coming off two of the best seasons of his racing career, is in the midst of a lengthy recovery from a severe concussion that left him with stroke-like effects slowing his speech, hampering his coordination and sapping the energy of the 46-year-old with the gray-speckled beard.

"I wish I'd have felt better to enjoy it more," Michael said of the banquet, where he received a standing ovation following his introduction. "By the time we got out of there it was 10 o'clock and I was just give out. I was tired and sleepy."

That contributed to a shortened champion's speech ending with Michael breaking down in tears and Kimberly Michael rising to comfort her husband. "I kind of got a little emotional when I got up there to speak," Michael recalled. "It just kind of hit me all at once."

SRRS president Mike Luna, a long-time friend and racer, said the champion wasn't the only one to get emotional as he thanked his family for their help during his recovery. "I felt tears running down my eyes," Luna said, "and I think everybody there was, too."

Some of the tight-knit SRRS drivers were at Green Valley Speedway the last Sunday in November when the unconscious Michael was lifted into a medical helicopter for a hurried trip to UAB Hospital in Birmingham after his No. B17 slammed driver's-side first into the outer concrete wall. Those that weren't quickly got word of the life-threatening wreck. A track paramedic later told Luna that upon seeing Michael's condition, he gave him a 50-50 chance of survival.

"It's just a miracle he's here, and that's what I told him Saturday night," said Luna, a series co-owner along with drivers Tony Morris, Jay Brinkley, Michael and two others. "I think it was just emotional for everybody, really. Our guys are kind of like family. It's not like we really compete against each other. It's all just kind of a family deal."

Michael is grateful for the assistance, well-wishes and prayers from the racing community.

"I've had tremendous support from friends and different people who have kept up with me," he said in a recent phone interview. "It's kind of humbling to know that many people care about your well-being. I've had help from people at the track, that I never dreamed would give me much the time of day, who have helped with (son) Trevor (at Green Valley) and offered support and loaned parts to put on my (wrecked) car to get it in the trailer and get it home."

For Michael, racing is on the back-burner as he slowly regains his health under monitoring from neurologists and doctors in Florence and Birmingham. "I'm gradually getting better," Michael said, estimating that he's 50 percent back.

Byron's father Tonis Michael, who owns and operates Michael's Muffler and Auto Center with his son, thinks he doing even better in the seven weeks since Byron's three-day hospital stay and a stretch where he couldn't return to work. "He's a little bit hard on himself sometimes," the elder Michael said.

"He's made a world of improvement from what he was ... he's so close it makes you proud to where he's at. He had us worried there for a couple of weeks. He's looking better all the time."

Michael, whose most serious injury besides the concussion is an extremely sore neck, said doctors haven't given him a time frame for a full recovery.

"As of now, they said things are progressing, they just want to give me more time, and said if I have any more difficulties to come back to them," Michael said, his Alabama drawl ever-so-slightly slower than before. "Fortunately, I didn't have any serious permanent damage. They assured me my mind and everything would heal. It would just take time. There wasn't any medication or treatment for that. Just let Mother Nature take its course.

"They've been pleased with my progress and if I can get a little energy back to where I feel like doing something, I think that would make me feel better."

While he's thankful for his recovery, Michael has no memory of Thanksgiving. He can't remember the accident or the week-and-a-half stretch through early December during his early recovery. He has struggled with vision problems that cause dizziness, although that's improved in recent days. He used to be a night owl, but now before prime-time TV shows begin, "I'm just zonked," he said. And he found on a recent visit to 10-year-old Trevor's basketball practice that his hand-eye coordination was off. "I could see the ball, but by the time I reached for it there wasn't anything there," Michael recalled. "I'd just completely miss it."

"For the first couple of weeks, he reminded me of somebody who had a stroke, just his walking and motions and speech," said his father, who closed the automotive shop for a week following the accident and hasn't since handled the usual workload. "His energy, his stamina, his motions, he's not as quick at doing things. Just a few things like that you notice. He has to think on things a little bit more than he used to. He studies on it a little bit more than he used to. I think he's doing real well, considering how he was."

Doctors haven't cleared Michael to drive a passenger car. Kimberly takes him to work each morning, then he rides home with his father. Kimberly picks him up at his father's house on her way home from her job at Farmers Insurance Group. And driving a race car? That will wait as Michael's recovery develops.

Michael said some racers have asked him if he's scared to race again. "I tell 'em I don't have nothing to be scared of, because I can't remember it," he said. "As for how bad I felt and how sore I was and how sick I was, it just took so long to halfway get back to where I'm at now. I've still got quite a ways to go to get to what I call back to normal."

Michael saw the wrecked car for the first time six weeks after the accident. Luna saw the destroyed car on his first visit to see Michael, but he said they haven't really talked about racing much.

"We've talked about the wreck, the day of the wreck, about him seeing the car. ... but as far as racing again, he can't even drive a regular car," Luna said. "As far as him racing anymore, I think he's going to have to have quite a bit of improvement. But I'm not so sure he wants to."

Added his father: "As far as I'm concerned, I'm ready for him to quit. But I raced myself, so I know how it is."

"The first thing I've gotta do is worry about getting me up to par," Byron Michael said. "I've got a couple of kids to look after and a business to run. I've got to get some of that stuff to where I can take care of it. Priorities. I'm still interested in racing, but I'm not sure now (about) what capacity. ..."