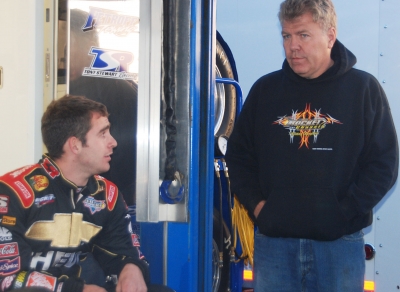 And the beat goes on for Rocket Chassis. The Shinnston, W.Va.-based manufacturer ruled the World of Outlaws Late Model Series once again in 2008, winning the national tour’s Chassis Builders Challenge Award for the fifth consecutive season.

Rocket remains the only company to capture the top chassis builders’ honor since the World Racing Group began operating the series in 2004, an achievement that Rocket co-owner Mark Richards acknowledged but modestly deflected.

“That’s what they tell me,” a smiling Richards said when asked about his firm’s five-year WoO winning streak after accepting the award during the tour’s 2008 awards banquet in Orlando, Fla. “It’s a tribute to the good racers in our stuff who have confidence in what we build, take it and do a good job with it.

“And I have to thank all of our employees back at Rocket Chassis,” he added, hailing the 14 full-timers (not including himself and partner Steve Baker) who comprise the company’s workforce.

The 2008 WoO Rocket army was led by Darrell Lanigan, whose unprecedented run of consistency brought him the tour’s $100,000 points title for the first time in his career. Lanigan became the third consecutive driver to capture the WoO championship behind the wheel of a Rocket machine, following Steve Francis (2007) and Tim McCreadie (2006).

“He deserves it,” the 48-year-old Richards said of Lanigan, a Rocket loyalist for more than a decade who has developed a close relationship with Richards. “He’s been with this whole Outlaw deal since it started and I know he’s wanted to get a championship knocked down at some point. It’s an accomplishment to be proud of and I think it means a lot to him."

Rocket’s spectacular ’08 campaign — no other chassis manufacturer won more than five WoO events — returned the well-known shop to dominator status on the tour after below-average results the previous year. While Rocket won the 2007 WoO Chassis Builders Challenge and boasted seven of the top 10 drivers in the points standings, the company’s victory total (19) was its lowest ever on the series.

Mark Richards attributed Rocket’s reduced 2007 numbers to a slow start that resulted from some significant changes in the manufacturer’s core WoO group. With key Rocket racers McCreadie and Dale McDowell not returning as tour regulars and Rick Eckert switching chassis builders, it took a while to get everyone running Rockets with the Outlaws “back together and on the same page,” said Richards.

The new-look Rocket group began to hit its stride late in 2007 and the success carried over to ’08.

“Oh yeah, it was a big plus for us to get a team of guys back together who are willing to work together and share information,” said Richards, analyzing Rocket’s success in ’08. “And I think we’re going to be even stronger next year.”

Richards is determined to maintain Rocket’s historic control of the headlines on the WoO. Rocket cars have won 118 of the 197 series events contested since 2004 and claimed no fewer than seven of the top 10 drivers in the points standings in any season.

Richards has already overseen an extensive testing session with an eye on 2009. In early December he traveled south with his son, Francis, Clanton and McCreadie to spend several days experimenting at Golden Isles Speedway in Brunswick, Ga., Volusia Speedway Park in Barberville, Fla., and East Bay Raceway Park in Gibsonton, Fla.

Richards hauled two Dirt Late Models to the test session — one of his familiar No. 1 house cars and an Ernie Davis-owned No. 25 that his son drove in several non-WoO events. The Davis machine sported new front and rear suspension geometry and a new Integra Shock package that Josh and mechanic Robby Allen experimented with in 2008 in hopes of applying the ideas to ’09 Rocket models.

“We wanted to get a feel for where the new car stacks up with our cars that were running well at the end of the season,” said Richards, noting that Rocket’s new front-end chassis is adaptable to race as either a blue or black front-end machine. “We had Josh’s (No. 1) car (McCreadie was an extra driver for Richards’s two cars), Shane’s car and Steve’s car set up like they were at the end of (2008) so we could see how the new car ran against them.

“We felt like we got in a real good test and learned a lot. We think the new car will be a definite improvement.”