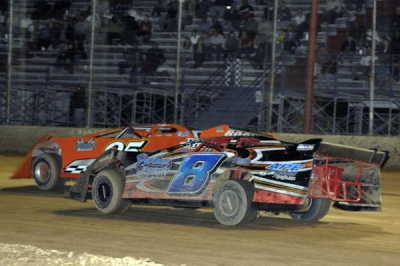 TUCSON, Ariz. (Nov. 1) — Taking the lead from his third position when two frontrunners got together, 14th-starting Lonnie Parker Jr. of El Mirage, Calif., capped his fifth championship season on the Southwest DIRTcar Late Model Series with a victory at USA Race Park. Parker pulled away late in the race for the $1,000 victory.

Jerry Fincher of Laveen, Ariz., and Jeff Manka of Phoenix, Ariz., were battling for the lead in the second half of the race when they got together in turn four. Parker was able to make his winning move and go on to victory while Fincher, who led from the outset, settled for second. Joey Moriarty of Phoenix was third followed by tail-starting Tommy Hussak III of Picacho, Ariz., and Manka, who drove his own No. 95 normally driven by Mark Fowler. Polesitter Mike Clark of Pine Valley, Calif., ended up sixth.

Notes: Parker notched his series-leading 54th victory. ... Wayne Noyes and Mike Brigner were knocked out of the race but an early turn-three tussle. ... Brad Williams was eliminated when he hit the turn two wall on the second lap. ... Randy Carder and Adam Crippen were also early retirees. ... SWDLMS competitors have two more non-points events Nov. 14-15 at Manzanita Speedway in Phoenix. Friday's race pays $1,500 to the winner with $6,000 going to Saturday's winner.