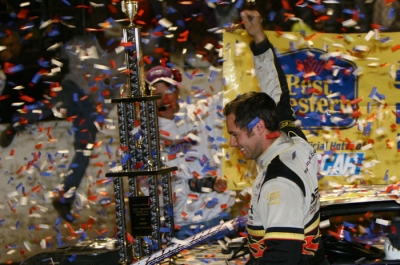 “When you win with these guys, it’s top-notch,” Van Wormer said of his first career WoO triumph. “They’re not the World of Outlaws for nothing, so winning a race against them is huge for your resume, huge for your career.”

Taking advantage of the third starting spot, Van Wormer overtook Matt Miller of Waterville, Ohio, for the lead on lap two and never looked back. He turned back late challenges from WoO regulars Darrell Lanigan of Union, Ky., and Chub Frank of Bear Lake, Pa., who finished second and third, to register one of his biggest wins ever.

While Van Wormer is known across the dirt Late Model landscape for his hard-charging style, it was his cool, calm approach that propelled him to victory at the high-banked, quarter-mile oval.

Once Van Wormer was in the lead, he eschewed his usual rim-riding in favor of an effective line around the extreme inside of the track.

“I knew the bottom was gonna be good, so we tightened our car up and put a hard tire on so I could run through the middle,” Van Wormer said. “There was a lot of moisture on the bottom, and that helps you get good drive off the corners.”

“I wasn’t gonna get off the bottom. They were gonna have to go around me on the top.”

After the race’s fifth and final caution flag flew, on lap 23 for the stopped car driven by UMP overall weekly points leader Wes Steidinger of Fairbury, Ill., Lanigan closely tailed Van Wormer around the inside of the speedway and Frank tossed his car around the extreme outside of the track.

Van Wormer was too strong, however, and beat Lanigan to the finish line by about five lengths. Not surprisingly, he was a very happy race car driver when he reached victory lane.

“Over this weekend I thought we had some good cars, but we just had some bad fortune,” said Van Wormer, who finished 10th on Friday at Paducah (Ky.) International Raceway (he relinquished the pole starting spot and started last in the 50-lapper because a leaking water pump forced him to run his backup car) and placed 12th on Saturday at I-55 Raceway in Pevely, Mo. “Tonight we started close to the front and really capitalized on it — and I’m stoked.”

Van Wormer, whose previous career-best WoO finish was a fifth on July 26 at Lawrenceburg (Ind.) Speedway, dedicated the triumph to his late Uncle Rick.

“This one was for him,” Van Wormer said of his uncle, who passed away on Aug. 31. “He always supported me. It was behind the scenes, but he was always there to support me.”

Lanigan, 37, came from the ninth starting spot to bid for the lead after the halfway mark, but his hopes were hampered by a mechanical problem on his gottarace.com Rocket.

“We broke a bolt in the shock mount with about 10 to go, and it let the car rock up too high,” said Lanigan, who had been rained out after qualifying in his only previous visit to La Salle. “Before that we were pretty good, but once it did that the car started getting too much roll-steer and I was getting loose.

“(Van Wormer) kept scooting out some, so I thought if I could get up to him I’d be alright on the bottom. But I didn’t have enough to really get up there.”

The night’s showstopper was Frank, who spiced up the final 17 laps with his bid to win the race running the track’s unruly cushion.

Frank, 45, looked like he was ready to sail by both Lanigan and Van Wormer shortly after the race’s final restart, on lap 23, but he gradually lost ground to the leaders and had to settle for third place in his Lester Buildings Rocket.

“I needed a restart with about four or five (laps) to go so I didn’t have to wear myself out up there,” said Frank, who closed to within 54 points of Francis in the WoO standings with six events remaining. “It was so far out and rough up there, I just couldn’t make it work for many more laps than that in a row.

“If I got a yellow with about four to go and then just hammered it for the rest of the race, I would’ve had a chance to win.”

Van Wormer's MasterSbilt Race Car is sponsored by Bayline Fire Protection and Globe Technologies. ... Tim Fuller rallied to fourth in the closing laps. ... The first-ever WoO stop at La Salle was promoted by Bob Sargent’s Macon, Ill.-based Track Enterprises. ... The night’s most spectacular accident occurred during the fourth heat when Roger Brickler of Springfield, Ill., flipped wildly down the homestretch on a lap-two restart. Brickler’s 4-race-old MasterSbilt car was destroyed, but he escaped injury in the wild wreck. ... WoO regulars return to action with stops at Bedford (Pa.) Speedway on Friday night (Sept. 21) and Pittsburgh’s Pennsylvania Motor Speedway on Saturday night (Sept. 22).