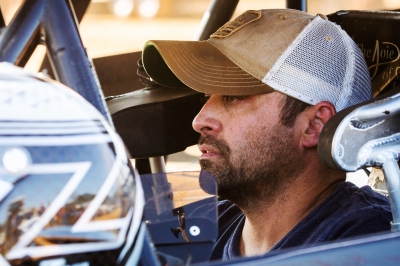 Trimble came through in a big way, capturing the championship with 12 victories in 25 Fastrak events while focusing on action at Roaring Knob Motorsports Complex in Markleysburg, Pa., and Elkins Raceway in Kerens, W.Va. Trimble found further success in non-Fastrak events in posting 15 victories overall and 28 top-five finishes, never failing to finish a main event.

"It worked out good for us; we had an excellent year and won a lot of races," Trimble said. "The $20,000, that just helps out with racing so much, with the cost of everything right now.

"I had a lot of people that help me, and it takes a lot of pressure off me; my wife does a lot for me, too, with the racing stuff, and (car owner) John (Groves of Swanton, Md.) takes care of the car and anything I need he just tells me to get it and doesn't question anything I do. Winning the championship is big, and I am proud to be the sanction's national champion."

ESHELMAN MEMORIAL: A celebration of life honoring late World of Outlaws Case Late Model Series announcer Rick Eshelman will be held from 10 a.m.-noon on Nov. 4 under the pavilion at the Zmax Dragway adjacent to the Dirt Track at Charlotte Motor Speedway in Concord, N.C., which hosts Nov. 2-5's season-ending World Finals. Visitors may sign a register book in Eshelman's memory and receive a special racing lanyard and folder honoring his life. The service will be live-streamed at millardfamilychapels.com beginning at 11:30 a.m. EDT. Memorial donations may be made to the National Dirt Late Model Hall of Fame or American Foundation for Suicide Prevention. Find a complete obituary and more information at millardfamilychapels.com.

DEEP SOUTH EVENT BIGGER: The Hunt the Front-promoted Southern Showcase presented by Sweet Victory Apparel has added $2,000 more to the weekend finale winner’s purse thanks to sponsorship from Aces Renovation of Depew, N.Y. The Nov. 18-19 event includes $5,000- and $22,000-to-win events for Super Late Models. Several other divisions are in action and practice is scheduled for Nov. 17.

BLUE RIDGE TOUR SUPPORTER DIES: Steve Heintz of Statesville, N.C.-based Heintz Brothers Automotive, a longtime supporter of racing and of the Blue Ridge Outlaws Late Model Series, died Oct. 21 at Atrium Baptist Hospital in Winston-Salem, N.C. He’d suffered a massive heart attack on Oct. 8. “It is with great sadness and broken hearts to post about the passing of our biggest supporter but even more one of the most genuine kindhearted person you could ever know,” the Blue Ridge tour posted on its Facebook page. Steve Heintz and his late brother Mike founded Heintz Bros. Automotive in 1979 to service the performance parts industry. The brothers were inducted into the North Carolina Drag Racing Hall of Fame in 2013. Among survivors are Steve’s wife Shirley and his son Scott Heintz, who operates Heintz Performance in Concord, N.C.

OKLAHOMA TRACK REOPENING: Longdale (Okla.) Speedway is expected to reopen in 2023 and host Complete Well Testing Sooner Late Model Series events among other specials and monthly races. The Jesse Hoskins-owned track, which last hosted a Sooner Series event in 2020, will be operated by promoter Terry Mattox and business partner Kerry Gorby. "Longdale is one of the nicest facilities in the state and needs put to good use and we can't thank Jessie enough for allowing us to make this happen.” Mattox said. "Gorby and I are planning to hold one race a month at Longdale.” The track tentatively plans to operate the third Saturday of the month and avoid conflicts with Enid Speedway, which typically hosts several Sooner Series events each season. Visit longdalespeedway.com for more information.

DUCK RIVER CHANGE: The Nov. 4-5 Deep Fried 75 at Duck River Raceway Park in Wheel, Tenn., has been changed to two complete events on back-to-back days instead of a $20,000-to-win, two-day event. The Valvoline Iron-Man Racing Series events will pay $5,000-to-win (30 laps) on opening night and $10,000-to-win for the 45-lap finale. The track’s regular divisions will also be in action. Practice is scheduled for Nov. 3.

ODDS AND ENDS: Jeff Peterson announced Oct. 2 he’s ending his promotions of East Moline (Ill.) Speedway after three seasons. … Former Stateline-Eriez and Raceway 7 Late Model racer Dave Tackett of Ripley, N.Y., died Sept. 27 after a lengthy battle with leukemia at age 57. The driver of the No. 68T was a crew member after ending his racing career. … Minnesota-based Structural Buildings Inc. announced it will continue its title sponsorship of the WISSOTA Challenge Series through 2024. … Potomac Speedway mourned the Oct. 5 passing of Tom Wagner Sr., the first-ever Late Model champion at the Budds Creek, Md., track that opened in 1973. The patriarch of the track’s long-competing Wagner family and ambassador to the racing community was 77.