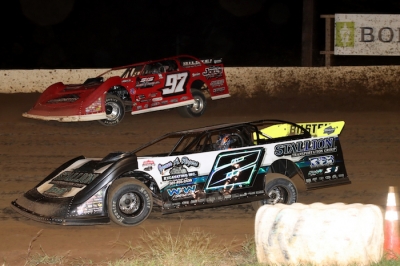 It’s no surprise Cade Dillard of Robeline, La., wasn’t enthusiastic about joining winner Tyler Stevens and third-finishing Kyle Beard for podium photos Saturday at Boothill Speedway in Greenwood, La. Contact with Stevens during the early battle for the lead  in the finale of the Louisiana State Dirt Track Championships on the Comp Cams Super Dirt Series left Dillard not feeling so friendly.

Stevens, the Searcy, Ark., driver who swept the weekend’s $6,000 feature events, acknowledged the contact between the two during his victory lane interview.

“It was hard racing for sure, you know,” the red-bearded Stevens said. “We caught lapped traffic there and he got a run on me down the front straightaway and we kind of (were) all fighting for the same piece of real estate, you know? We're buddies and we race hard and it's just hard racing on a bottom-dominant racetrack.”

Dillard, who finished second Saturday after a third-place finish Friday, didn’t mince words in his interview.

“We were good around the top after Tyler run over both sides my race car,” Dillard said, saying the contact damaged his car’s ability to steer. “If I’d have known he was going to run me like that, I’d just have stayed in the gas and took him out right here and been done with it. That’s how some people race, but we'll just keep building on it and go on.”

Dillard, who earned a $12,000 unsanctioned victory the previous week at Magnolia Motor Speedway in Columbus, Miss., said he had “an extremely good car” but not good enough to survive the scrape.

“I hate that happened,” Dillard said. “We were just riding waiting on him to mess up. We caught him (making) a mistake and we get raced like that. So that's my fault for racing too clean (and) trying to be friends out there. But I'll know for next time.”

Justin Kay of Wheatland, Iowa, is no stranger to competing in the Yankee Dirt Track Classic. He’s also very familiar with Davenport Speedway, the quarter-mile Iowa oval promoted by his father, Ricky, that on Saturday night hosted the Hawkeye State’s longest-running Dirt Late Model event for the first time.

So it was little surprise when the 34-year-old driver emerged victorious in the 60-lap feature, which was co-sanctioned by the sister Hoker Trucking and Malvern Bank tours. He earned $6,045 for becoming a two-time winner of a race that Kay’s father added to Davenport’s schedule for 2022 because the management of 300 Raceway in Farley, Iowa — the Yankee Classic’s home since 1989 — decided  wouldn't run one the event this year due to staffing issues, tire shortages and inflation.

Aside from running second behind Nick Marolf of Moscow, Iowa, for the race’s first 14 laps, Kay was essentially perfect in the caution-free headliner. He assumed command on lap 15 when Marolf retired due to terminal engine trouble and pulled away late to defeat Jeff Larson of Freeport, Ill., by 2.851 seconds.

“Starting on the front row really helped me a lot,” said Kay, who was the race’s polesitter. “I could just kind of ride around … the first 15 laps I just followed Marolf around. I was watching what he was doing, seeing how the track was changing.

“I seen a puff of smoke from him and I was like, ‘I better get out from behind him in case he breaks it,’ so I moved down just a little bit. Then right when I did that, he broke.”

Kay went on to lap up to seventh place as he stayed on top of an ever-changing track surface with his MB Customs machine.

“The first little bit (the prime groove) was kind of in the middle, then the track moved up to the top, and then it switched back to the bottom,” said Kay, who has started every Yankee Classic feature contested since 2011 (the race was rained out in ’18). “It was kind of moving all over. It changed a lot throughout that race. It definitely wasn’t just one line.”

Kay, who previously won the Yankee Classic in 2019, became the 10th driver to record at least two victories in the race that was run at Hawkeye Downs Speedway in Cedar Rapids, Iowa, from 1978-88 before moving to Farley from 1989-2021. Other multiple event winners are Steve Kosiski (five); Denny Eckrich and Chad Simpson (four); Tom Hearts and Jeff Aikey (three); and Gary Webb, Steve Boley, Tyler Bruening and Joel Callahan (two). — Mike Ruefer

Just call it Tyler Carpenter’s Harvest 50. That’s what the long-running special event at Skyline Speedway in Stewart, Ohio, has become.

The 32-year-old standout from Parkersburg, W.Va., continued his mastery of the Harvest 50 on Saturday night, winning the nearly four-decade-old race for the sixth consecutive time (though not consecutive years because the event hasn't been consistently held).

“I’m just glad to be here and be in victory lane to keep the streak alive,” Carpenter said after pocketing $5,000 for his latest Harvest 50 triumph.

Carpenter was his usually loquacious self after winning the race as he described how he was able to beat fellow Parkersburg resident Colten Burdette to the finish line.

“The old Kryptonite was on dig,” Carpenter said of his car designed and built by his father Freddie. “I’ve been pretty good. I’ll tell you what, though, I was really worried about Colten after that dash … he was rolling pretty good so I knew I was gonna have problems with him.

“Anybody knows Skyline’s a pretty tough task to hold someone up, so when you catch lapped traffic you want to get around them as fast as you can. I used to be rough around the edges and you gotta go here, but at the same time you don’t want to take out a fellow racer, so I try to be as clean as a I can. I knew Colten would be biting at my heels.”

Carpenter dished out post-race praise to Skyline owner Jeff Burdette, who purchased the track a year ago and has been working to revitalize the facility. The two-day Harvest 50 weekend was a big step forward in that regard as Burdette enjoyed his biggest car counts (including solid Late Model turnouts of 35 for Friday’s 25-lapper won by Corey Conley and 38 on Saturday) and largest crowd since assuming control of the track while also producing a very racy surface.

“Everybody give Jeff a round of applause for a helluva track,” Carpenter asserted. “I’ll tell you, slick or not, we was moving around all the place. He’s doing a helluva job here.” — Zach Yost

The five-time MARS champion — and Octoberfest winner in Muskogee more than 30 years earlier — drove the backup car of Muskogee driver Hayden Ross, racing to a sixth-place finish at the half-mile track.

“(Hayden’s father) Brady (Ross) asked if I would play with the car and see how it went so we came out and gave it a whirl,” Frye said of his return to the driver's seat. “I thought I would try it one more time and see how it went. I enjoyed it. For me, if I don’t win I am a failure, but we had a good run.”

The Greenbrier, Ark., resident finished third in his heat race, started fifth in the feature and finished sixth.

“I was a little twitchy for a few laps, but it came back,” said Frye, who had last driven a Late Model in 2016. “This is my favorite racetrack of all time.”

The pole-starting Hughes notched his fourth series victory of the season and tour-leading 30th of his career.

“We tried some different stuff on our setup and it worked for us,” Hughes said. “It is a good night to pull a win off and I am more happy that we find something that fixed the problems with our car. We are still learning about the Rocket (Chassis) stuff so we are gaining on it.”

Hughes took the checkers ahead of Hayden Ross with Troy Bynum in third.

“We got lucky on the draw, kept our nose clean and clicked off laps,” Hughes said.

In continuing to streamline our race coverage, we’ve added DirtonDirt.com Dispatches to our list of regular features on the site. The idea of the new feature is to spotlight key storylines of the weekend (and sometimes during the week), putting notes, quotes and accomplishments in context to provide subscribers a quick-hitting read on all the latest from tracks around the country. Bear with us as the new feature evolves. Our intention is to have a single file that’s regularly topped by the latest news, so check back throughout the weekend.