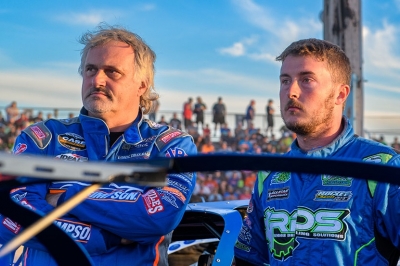 The World of Outlaws Case Late Model Series head into the final 12 races of the season Friday at Smoky Mountain Speedway in Maryville, Tenn., with the championship chase tightening up between leader Dennis Erb Jr. of Carpentersville, Ill., and Tanner English of Benton, Ky., winner of the previous two national tour events at Davenport (Iowa) Speedway.

Both are looking for their first national touring titles with the series heading to Lavonia (Ga.) Speedway on Saturday and finally in November wrapping up the season at the World of Outlaws World Finals at the Dirt Track at Charlotte in Concord, N.C.

Erb has been in firm command since taking the points lead March 25 at Cherokee Speedway in Gaffney, S.C., but English — a rookie contender on the series but a driver with multiple five-figure paydays — has been slowly climbing his way up the points mountain, now 98 points behind Erb, who failed to finished Davenport’s finale while English collected a career-high $30,000.

English knows trying to make the rest of the climb won’t be easy with upcoming events on surfaces he’s struggled on, but he hope to stay consistent and continuing making up ground in the title chase.

“I think if we keep on doing what we’re doing and staying consistent, we’ll be all right,” English said. “Some of these tracks coming up are a little harder for me. The red dirt tracks I’m not the best on. We need to learn a little bit down there and maybe lean on our guys at Longhorn (Chassis) a little bit and see if we can get some more information and get a little bit better.”

English isn’t only battling the tracks for the rest of the season but also Erb’s experience. As a national touring veteran, Erb has competed at Smoky Mountain and Lavonia several times, including a second-place finish at Lavonia in 2020.

“I’m hoping it plays out pretty good,” Erb said. “I feel pretty confident going into a lot of these places here.

“I’ve had a lot of good runs at Charlotte, so I’m definitely looking forward to going there. Hopefully, we can get a little bit more of a cushion built up before we get back there.”

With many of the remaining series events on red clay, Erb said vital track position will be vital.

English echoed that statement, adding his concern about tire management.

“Down there in the South, you better qualify good,” English said. “A lot of it is tire management and stuff like that. You have to be on top of your game there and be prepared on tires and do your research on how to groove them, sipe them, and stuff like that.” — Mike Warren

A rough start to the season, including failing to qualify for the Show-Me 100 at Lucas Oil Speedway, led Jackson to sell his stable of Late Model cars and take a break to regroup. Armed with a new Capital Race Car, the 25-year racing veteran returned a couple of weeks ago to capture MLRA events in Iowa.

“I feel rejuvenated and blessed to be where we’re at,” Jackson said.

The Ron Jenkins Memorial, paying tribute to the man who built the original Wheatland Raceway, pays $7,500-to-win during the Labor Day weekend special.

Jackson, a two-time MLRA champion (2013 and ’21), took a brief break over the summer when results weren’t up to par and his cars just didn’t feel right.

“I don’t know, I’d raced for a long time and I knew what kind of feel you look for and I didn’t feel that I had it,” Jackson said. “Obviously everybody thinks they can get the job done, but you start doubting yourself.

“I had no intentions of quitting. I just needed to regroup. That’s what we did. We kind of stopped, took a deep breath and rebuilt on a program that we know what it takes to win.”

The connection to Capital Race Cars owner Marshall Green made sense, Jackson said, because he had known Green for a long time and he recommended a Capital car to fellow area racer and friend Payton Looney a few years ago. Looney went on to win the 2019 Show-Me 100 in his Capital, giving the Georgia-based company additional national credibility.

“Payton was at a point where he was struggling and I told him that Marshall was a very good person and he went that route,” Jackson said. “He’s had a bunch of success and at the same time, when I was struggling, I was talking to Payton and he’s like ‘I think you’d be happy with a Capital.’ I had stayed in contact with Marshall and it was just an easy move.”

Winning right out of the box with a new car is relatively rare. Jackson said Green’s advice seemed to fit perfectly from the get-go.

“It just fit me, the way we talk and communicate,” Jackson said. “You want good balance in your race car and it was just a really good race car when we unloaded. We definitely have a lot of confidence and momentum going forward.”

Jackson said his goals the rest of the way are simple. His time away from racing didn’t affect any plans to chase points, as he intended all along to be selective with his racing choices.

“It was a kind of a weird year. We had no points racing plans,” he said. “Business is really busy and my daughter is getting older. We planned on hitting a lot of the bigger-paying shows ... but we just had no speed, so we stopped and regrouped.

“Now we’re going again and look forward to trying to win as many races as possible and just basically build our notebook with these cars and be ready to come out strong next year.” — Lyndal Scranton

Idle since mid-July while dealing with back and leg issues, Scott Bloomquist of Mooresburg, Tenn., has built a new Team Zero car to run in Eldora’s postponed Dream feature and the following three nights of World 100 competition. It’s possible he will shake down the machine in Friday’s WoO event at Smoky Mountain Speedway. … Darrell Lanigan of Union, Ky., whose only action since June’s Eldora Million-Dream doubleheader was at his hometown Florence Speedway’s North-South 100, plans to enter a Capital Race Car owned by fellow racer Tony Jackson Jr. in Eldora Speedway’s Baltes Classic on Sunday and the World 100 just days later. … Friday’s $3,000-to-win event at Grand Rapids (Minn.) Speedway will run independently after the track dropped Structural Buildings WISSOTA Challenge Series sanctioning.