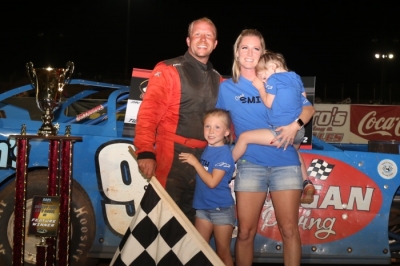 YORK HAVEN, Pa. — Chad Smith didn’t know what to expect when he rolled out for Saturday's Smokey Frye 50 at BAPS Motor Speedway. That’s understandable. Smith was positioned in 12th on the starting grid with plenty of heavy hitters in front of him. There was also the unknown of a few late changes and how it would affect the car.

But Smith's race couldn't have turned out much better. Smith stormed through the field and caught a break when leader Chase Billet was put to the rear and then disqualified for spinning a backmarker. Billet's car also sustained damage to his car during the incident.

The result was a $2,000 payday and the biggest victory of Smith’s career at the track. After taking the lead, the Duncannon, Pa., ace pulled away over the closing stages of the 50-lapper to take an emotional Creekside Auto Sales Late Model win.

“I had my doubts at the beginning of the race, well before we went on track,” Smith said. “I guess that’s not a good way to start the race out, but I felt this one was almost given to us. That was a raw deal with Chase, there.

“Eric (Tripp) was given the move over flag, and he didn’t move. That’s when you get moved. When you're racing for the win, he was in the preferred line, and it was time to move. He didn’t heed the flags, so I feel bad for Chase. I feel like we were going to put a good race on at the end.”

Travis Mease started on the pole, but Billet was the fast car early. He grabbed the lead at the start and led the first 13 circuits.

Randy Stoudt, who started third, slipped by Billet for the lead on lap 14 and held it for the next three circuits. Billet was having none of it and shot back into the lead on the 18th circuit.

As for Smith, he passed three cars at the start and cracked the top five on lap 15. The car started to gain speed as the race wore on, and he made a jaw-dropping move off of turn four in which he got underneath Stoudt and passed D.J. Mease on the frontstretch to take over the runner-up spot by just before halfway.

“It was tight racing, especially at the beginning of the race, because everybody was dicing and slicing,” Smith said. “I do have to say, the track came around for us.

“There was a lot going on at that point in the race. I had a problem in the center of the corner and wasn’t carrying the momentum, so I thought that was my shot. D.J. was hanging tough on the bottom, and he always races me super-clean, gives me enough room, and always makes it fun. I like racing like that.”

Billet was still out front when he tried to put Tripp a lap down. Contact was made, and Tripp spun around in the second corner on lap 39. The leader was put to the rear and went to the pit area, which handed the lead to Smith.

Within four laps, Smith built a four-second lead. A caution slowed his pace, but it didn’t stop him from pulling away from the field and earning the victory by a comfortable 2.758 seconds.

“I saw (Niklas Stoudt) beside me, and I thought he was gaining on me,” Smith said. “That had me a little worried, but I knew where I was at, I knew the pace we were running, and I was confident with what was going on there.

“The car came alive and my guys gave me the signal that I was way ahead, but man, I almost had to be with the way I was driving.”