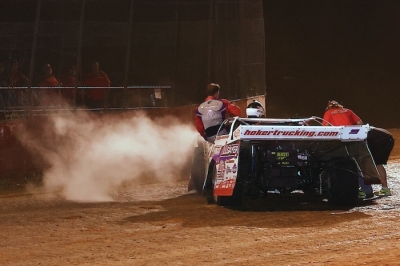 SUMNER, Ill. (June 28) — After diagnosing what caused a fire under the hood of his son Bobby Pierce’s car on the 16th lap of Tuesday’s DIRTcar Summer Nationals main event at Red Hill Raceway, Bob Pierce had a succinct description of what happened.

Did you get that? That’s the elder Pierce’s description of what happened when a distributor cap comes off and a loose fuel line caused flames to appear, causing a brief scare for the younger Pierce and forcing the DIRTcar Summer Nationals points leader out of the race won by Tyler Erb of New Waverly, Texas. | Complete Summer Nationals coverage

Pierce spun to a stop exiting turn four, facing the wrong way on the frontstretch in front of the big crowd at the track that hadn’t hosted racing since 2005. A track worker on a four-wheeler pulled off a fire extinguisher to spray douse the flames, and Erb’s crew chief Randall Edwards grabbed another nearby fire extinguisher to assist. When Pierce emerged uninjured from his car, the crowd roared with appreciation for his efforts and his health.

The moment was a bit scary for Pierce until it was clear the flames were mostly confined to the area near the engine’s air cleaner.

“I’ve never really had something like that happen,” the 25-year-old Oakwood, Ill., driver said. “Just the engine kind of shut off and I saw a flame. And you don’t really know where that flame is at. Is it just right there? Or is it under you? Or around you? But once the car was stopped I kind of noticed (the fire) was pretty small and I pulled the fire suppression (and) got out.”

With the race continuing and eventual runner-up Brian Shirley inheriting the second spot, Pierce’s car was pushed to the infield and the crew went to work figuring out what went wrong. Bob Pierce discovered the plastic clips to the distributor cap had come off, perhaps because the fuel from the loose line had been spraying on it throughout the race.

Regardless of how it happened, once the distributor cap came off, the nearby fuel line created the fire.

“That set the fire because the fuel was spraying right in there,” Bob Pierce said. “I’ve never seen it do that. It’s pretty warm and when that cold fuel hit that (distributor), it just softened the plastic up and it fell off.”

Bobby Pierce felt his car’s engine stumble a bit before the flames appeared.

“That was probably the distributor cap jumping up and it losing power, basically, and starting to shut down,” Pierce said. “Like (Bob Pierce) was saying, the fuel got in there and sparked with the distributor cap and all that. I mean, who knows that fuel might have been leaking out for a few laps. ... I might’ve been leaking out for a few laps (from) that line, because bouncing through the holes, I kind of started getting a miss, honestly, just very slightly.”

Bob Pierce is going to make sure the problem doesn’t come up again when preparing the fuel line for the next race. “I’m going to tighten it,” he said with a smile.

Tanner English of Benton, Ky., scored his third career DIRTcar Summer Nationals victory last week at Spoon River Speedway in Banner, Ill., drawing within two of the victory total of his father Terry English. If dear ol’ dad has his way, it might take the younger English longer than he expects to overtake his father on the tour’s victory list.

That’s because the 59-year-old Terry English, who has never officially retired, is making a comeback of sorts with plans to run his first Summer Nationals races in five years on Friday and Saturday at Paducah (Ky.) International Raceway and Clarksville (Tenn.) Speedway, two tracks where he’s among the winningest drivers.

The 29-year-old English was spectating Tuesday at Red Hill Raceway with plans to get back into action in his No. 81E Riggs Motorsports ride on Thursday at Fayette County Speedway in Brownstown, Ill. (English was at Red Hill supporting Jack Riggs, who was making his Super Late Model debut.)

The Englishes will be competing Friday for the first time together since 2019, when Terry made his last start for Burr Motorsports at Clarksville’s Fall Classic, a $3,950-to-win race won by Tanner.

The elder English returned to the track Saturday with a weekly Super Late Model victory at Clarksville, driving a 2016 Rocket Chassis last fielded by Tanner in December 2019 at the Castrol Gateway Dirt Nationals. It was Terry English’s first victory since an Oct. 27, 2018, triumph at Clarksville. His previous Summer Nationals victory came in 2008 at Highland (Ill.) Speedway.

Terry English spends much of his time these days assisting Tanner’s racing along with preparing equipment and providing crew help for Paducah, Ky., driver Dylan Thompson.

“I think he’s still got it,” Tanner English said. “I mean, he still looked just as smooth as ever there at Clarksville ... I don’t know what he’s going to do (after his Summer Nationals starts), but that’s what he went and tested for.”

Speaking of testing, English is still getting the handle on the Longhorn Chassis he drove to victory at Spoon River. The Riggs Motorsports team has primarily utilized Rocket Chassis, but English said he’ll choose between the two from track to track.

“I just feel like (some) certain tracks are Rocket tracks and certain tracks are for the Longhorn,” he said. “Right now I’m kind of easing into the Longhorn, you know, because I’m not fully — I don’t have everything that I need to do that deal yet, like informationwise and stuff like that. I’m just more comfortable in a Rocket right now, but I know that (Longhorn) is fast.”

Red Hill’s 24 cars were the fewest on the series this season. ... Feature runner-up Brian Shirley was within striking distance of winner Tyler Erb a few times over the final 14 laps, but couldn’t quite make a serious bid for the lead. “I felt kind of like a yo-yo,” the Chatham, Ill., drivers said. “I feel like sometimes I’d reel (Erb in), then I felt there at the end (I fell back). He had a (harder right-rear tire on) and it was probably better late in the race for him as far as my tire wear was pretty down to minimal. And then, when we did get to lapped traffic, I was just waiting for him to push, and if he pushed, I would try to zag. But he didn’t push with (those) cars there. We ended up second.” ... The series will go to another track that hasn’t raced this year (or many years) on Wednesday at Benton (Mo.) Speedway. The track last hosted a Late Model event about eight years ago and hasn’t hosted a Summer Nationals event since the 1997 victory by Randy Sellars of Mayfield, Ky.