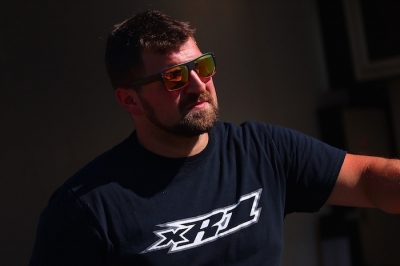 SUMNER, Ill. (June 28) — Lee Williams is the kind of dirt racer Bob Memmer had in mind so many years ago when he created the DIRTcar Summer Nationals, a track-by-track tour of the Midwest that gave even local racers the chance to compete nightly for stretches of several nights in a row.

The 30-year-old Haubstadt, Ind., driver has been looking forward to a stretch of seven nights of racing over 12 days — nearly half his season’s likely total race events — that includes six Summer Nationals races, starting with Tuesday’s 12th round of the tour at the reopening Red Hill Raceway. | Complete Summer Nationals coverage

“Had to use all vacation days and make it happen, too. All of them,” Williams said Tuesday afternoon in the pits at Red Hill, one of the closest dirt tracks to his southwestern Indiana home. “That’s why we had to come. (Crew member) Bryson Mattingly and myself, you know, we had to use all that vacation days to go racing this week. We’re like, ‘Man, we’ve gotta go to Red Hill, it’s only 15 minutes from the shop.’ So we wouldn’t mess this up.”

Still getting his footing in the Super Late Model division, Williams doesn’t have any designs on outrunning the top tour racers like champions Bobby Pierce, Brian Shirley and Jason Feger, or the other top touring drivers on hand like Tyler Erb, Billy Moyer Jr. and Ashton Winger.

“I’m not going to put myself on a pedestal when I shouldn’t be,” said Williams, who has a half-dozen seasons under his belt as he continues to improve. “I know my place in the Late Model world and my dream is to be up front competing. But you know, you’ve gotta know your place. It’s a serious sport and a serious class with big names all around you. So you got to know, you can’t really put yourself up there when you’re not. But you know, I’m here to compete as much as I can.”

One thing Williams does have is pedigree. He’s the son of 62-year-old Greg Williams, a former winner at Red Hill who, in his racing prime 25 years ago, was one of the top racers at his competitive hometown Tri-State Speedway in Haubstadt and cracked the starting fields for both the World 100 and Dream at Ohio’s historic Eldora Speedway.

The bearded Lee, an underground coal miner who has a wife Crystal and 9-month old daughter Camie, is too young to remember his father’s glory days, but the racing bug bit him nonetheless.

“When I was in middle school, he took me racing one time. I never was a huge fan of racing when I was a kid, but I went one time to help him out the pits and that just caught the bug,” Lee Williams said. “I said no to college ever since and said, ‘Just go get me a job. I need to make some money so I can afford my own (race car).’ That’s what it’s all about right there.”

Greg Williams eventually shifted to asphalt on the American Speed Association, then went back to Dirt Late Models a few years later with a 2005 Lazer Chassis. When Lee finally scraped together enough money to start racing, that was the car he drove in his debut at Kentucky Lake Motor Speedway in Calvert City, Ky. It was a forgettable outing.

“That was actually my first race in 2015 because I kind of restored the car when I started having money coming in, and I took the car out my first time out at Kentucky Lake Motor Speedway in 2015. I think I got lapped by Terry English three different times in the feature,” the younger Williams said. “I didn’t even know how to shift the car into gear, you know. Just trial and error really. … I just held it to the floor and it just burned up the clutch, I think.”

Williams is more capable these days, and had a career-best runner-up Super Late Model finish last month at Clarksville (Tenn.) Speedway. He’s got a 2019 Rocket Chassis with a Clements Racing Engine (recently freshened by Rhyne) and an array of sponsors — Wilderman Farms, Anita Waldroup of Tucker Realtors, Dale Mattingly Farm Services, High, Octane Wraps & Apparel, Owensboro Auto Spa, Maidlows and Dirt Car Lift — that support him along with Mattingly, his 27-year-old crew member from Owensboro, Ky., and of course his father.

“It’s got really good equipment on it,” Lee Williams said of his car, No. 17 just like his father, “So it’s all on me now — I don’t have any excuses equipmentwise. It’s just driver comfort in the seat and making laps.”

Greg Williams is still dabbling behind the wheel of his own Dirt Late Model, but he’s serving as support for his son at Red Hill. He says Lee is sometimes “afraid to be a little aggressive, of tearing his equipment up. That costs money to fix it. So he’s being a little conservative and learning, which is probably good. You have to be (conservative) if you have a budget.

“He’s using my shop and some of my equipment and if he wants to do it, he’s got to prepare it all himself. I just can’t prepare the thing and let him drive it. He’s learning and if it looks like he’s got the willpower to do it, or the drive to do it, more power to him. I’ll keep supporting him.”

“This is our first night out of six- or seven-race stretch for two weeks, so we’re going to kind of ease into it and do what we can do,” he said. “Our goal for tonight is to make the race, and if we can do that, we’ll be happy with smiles on our faces.”

Greg Williams, who never ran the Summer Nationals regularly but raced with the tour at Tri-State and other nearby tracks years ago, knows it’ll be a challenge for his son.

“I know my place in the Late Model world and my dream is to be up front competing. But you know, you’ve gotta know your place. It’s a serious sport and a serious class with big names all around you. So you got to know, you can’t really put yourself up there when you’re not. But you know, I’m here to compete as much as I can.”