From contributor, series and staff reports 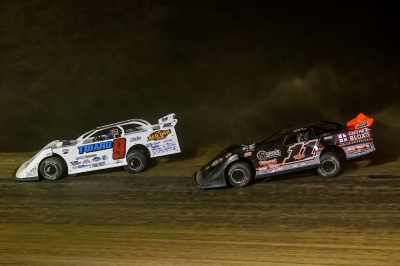 Friday’s Atomic 100 opener at Atomic (Ohio) Speedway showcased Devin Moran and Josh Rice in their element: the latter chasing the home-state driver for the win in a race that came down to who ran the cushion better. Moran eventually capped off the $5,000-to-win feature with the win not too far from his Dresden, Ohio, home, but he knew the checkers wouldn’t simply fall into his lap.

“I just got up behind them lapped cars and messed myself up and, like, the bottom was so much slower than that cushion. I knew Josh had to be coming,” Moran said. “I knew he was in third on that restart. I knew with how slick the track got, he had to be coming. So I tried to not scrub off so much speed. I saw him banzai it into three (on the final lap).”

Rice ran down Moran in the closing laps and pulled the trigger on a slide job in the final corner that proved too rigid to stick. As Rice lunged underneath Moran into the final corner, Moran cut across the track while Rice’s momentum swept him into the turn-four wall.

“Yeah, I got a little squirrelly off turn two (on the final lap). I didn’t want to run over Devin. I just wanted to make sure I cleared him, and I killed the wall,” Rice said. “I should have never been put in that position, man. I think I’m wild sometimes, then the No. 0 car (Freddie Carpenter), he’s definitely wild. He punted me on the restart and was wrecking lapped cars in front of us.

“I’m sure it was exciting for the fans. They love that stuff.”

Moran earned his sixth victory of the season, second coming in his native state of Ohio. Rice, meanwhile, feels good about his chances at winning his second five-figure payday of 2022 on Saturday at Atomic in the $10,040-to-win Valvoline Iron-Man Northern Series main event despite damage sustained from the frenzied bid at the win.

“Yeah, we have a really good car. Hopefully it’s not hurt too bad,” Rice said. “It looks like it’s all just body damage. I mean, awesome for the first night on it. All night long I’ve been saying it’s a good one. But congrats to Devin. He did a heckuva job. He got out there on us and took us too long to get to him. That was all I had. That was as fast as I could go.

Thursday's Hoker Trucking Series outing at Cresco (Iowa) Speedway wasn't a smooth outing for Tyler Bruening, but all turned out well for the Decorah, Iowa, driver who made a 15th-to-second charge behind Justin Kay in the $3,000-to-win event.

"I didn't make it easy on myself, for sure. We were really good all night long," Bruening said. "Went sixth to first in the heat race, and on the backstretch, the tire went down and went flat on me. So had to start 15th or 16th or wherever we were.

"I just kind of figured that most of the guys were going to venture to the bottom and if I was going to work my way up through traffic, I was going to have to do something different. So (I) just jumped to the top and tried to clean that lane off enough for me to make laps and it was really good all night."

"I seen him on the outside of me in (turn) four," Kay said. "I got kind of stuck behind them lapped cars going a little slower. I was like, 'God, I just feel like somebody could be out there.' I was just looking right coming down the frontstretch and I seen him, but I'm glad the checkered was when it was, and not one more lap."

Bruening, the Skyline Motorsports driver who abandoned a run on the World of Outlaws Case Late Model Series earlier this season, debuted a new Capital Race Car at Cresco, which ran the event during Mighty Howard County Fair.

"We had some bugs. The starter quit on it (and) some other things went wrong with it, but all in all, you know, first night out, we're in one piece. A helluva run," Bruening said. "It's good to be close to home. I'm sure I'll have a lot of fans down and stuff. And I'm glad we ran good. We've been running really good all year. We're just a little snakebit, you know? You've got to put a whole night together no matter what league or division or where you're racing. So we're close. We're real close." — Mike Ruefer

In continuing to streamline our race coverage, we've added DirtonDirt.com Dispatches to our list of regular features on the site. The idea of the new feature is to spotlight key storylines of the weekend (and sometimes during the week), putting notes, quotes and accomplishments in context to provide subscribers a quick-hitting read on all the latest from tracks around the country. Bear with us as the new feature evolves. Our intention is to have a single file that's regularly topped by the latest news, so check back throughout the weekend.