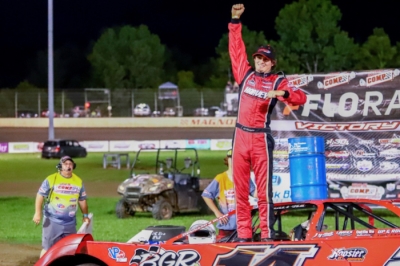 Wil Herrington's Clash at the Mag weekend was unforgettable. From his first-ever Super Late Model victory in Friday's opening Comp Cams Super Dirt Series event worth $5,000 to Saturday's career-high $12,000 payday at Magnolia Motor Speedway in Columbus, Miss. — to a postrace miscue when he struck the wall after taking the checkers when it was all said and done.

"I could have went two nights without tearing up and just tore it up after the checkered," the Hawkinsville, Ga., driver said after damaging the right-rear of his race cars. "I was gonna make a funny in front of my dad down there and hit the damn wall. So part of it, I guess. I guess we had a pretty good payday. We can fix it."

Runner-up Jeremy Shaw of Millport, Ala., noted Herrington's postrace scrape and wished the timing would've worked out in his favor.

"I wish he would've knocked the wall down a lap before. That've have been a lot better if he'd have just hit it on the white-flag lap instead of the checkered," Shaw said. "Me and Will, we're friends. He's a heck of a driver and anybody that watched him last night, he put on an absolute show last night. I wish I could have gotten by on the bottom (groove) a little before he did. I think we had a good car. We could run with him there for a little bit but, just didn't get get where we needed to be quick enough."

Herrington would like to continue his winning streak as quickly as possible.

"I want to go race tomorrow the next day," the winner said. "Let's just keep going and keep riding this out. We got to get back to work Monday ... I'm speechless really. This is just an awesome weekend all around."

Sam Seawright was determined to score his first career XR Southern All Star victory on Saturday at East Alabama Motor Speedway. And the 18-year-old Rainsville, Ala., driver turned up the wick in the nick of time to grab a $5,050 victory at the Phenix City, Ala., oval.

When leader Pearson Lee Williams got a little too high in turn four heading for the white flag, Seawright pounced, blasting down the frontstretch and diving into turn one to take command. Williams fought back down the backstretch — the frontrunners made contact, but both motored on — but Seawright led only the final lap in thrilling fashion.

"Man I can't even explain it, I've been trying so hard to win one of these races. Man on that last lap, I was driving this thing as hard as I could drive it the last 10 laps, I was doing everything I could. I'm just ecstatic," said Seawright, whose victory lane interview was briefly interrupted by a phone call from his father ("He's the one that makes all this happen for me," Seawright quickly mentioned).

"I'm just so excited, this is awesome," Seawright said. "The last lap I went down there in three and I never cracked the throttle. I was driving it as hard as I could. I had so much fun racing with Pearson. He raced me clean. I hope I didn't get into him. I want to win so bad, I was trying everything I had there at the end, but congrats to him on second. It was just an awesome race."

Williams, who broke through for his lone career Southern All Star victory last season at his hometown track in Dublin, Ga., had a hard time swallowing the loss at EAMS.

"I'm not a sore loser or nothing, but it stinks. I haven't lost a race like this," he said, crediting Seawright with his final charge. "He's an awesome dude, really good. I think this is the third time in a row we've finished second (with the Southern All Stars). I really feel like I let this one slip away. So I've congratulate to all my guys ... we're going to keep on going. We're hungry."

Justin Zeitner of Malvern, Iowa, notched a victory for the fourth consecutive week Saturday at Adams County Speedway, winning the Gail and Karen Hampel Memorial in Corning, Iowa. The $3,500 payday on the Malvern Bank Super Late Model Series was meaningful to Zeitner.

"It's awesome. We circled this one on the calendar when we knew they were gonna have it earlier," the winner said. "The Hampel family, I'm not the best of friends with them, I've always gotten along with them and grew up with them at the racetrack, but I remember this place back when the Hampels were running it, it was in its heyday and the bleachers were packed every week. I mean, hell, I was just a little kid up there playing with cars on the decks up there and it's pretty cool to be standing down here now."

Zeitner outran reigning series champ Tad Pospisil — "He's tough to beat, but I'm glad we got it done,"  he said — for his fifth special event victory of 2022.

He thanked his supporters and his family for their patience during a busy stretch.

"I was in the shop every single night this week. We broke a rear end a couple of weeks ago," he said. We finally got it and it was every night until midnight or later and I'm just glad it paid off."

Wil Herrington of Hawkinsville, Ga., has had plenty of Crate Late Model success, including at Magnolia Motor Speedway in Columbus, Miss. And while the former Crate Racin' USA touring champion has competed more and more often in the Super Late Model division, he'd never broken through in an open-competition engine event.

The 26-year-old took care of that Friday night in a big way.

Leading all but five laps, Herrington grabbed a $5,000 payday in the opening round of the Clash of the Mag on the Comp Cams Super Dirt Series. In celebrating the momentous victory, Herrington's voice was cracking in victory lane and he wiped tears away with the sleeve of his firesuit in thanking his parents, crew and others for their support.

"I can't thank everybody enough," he said.

Polesitter Tyler Stevens jumped into the early lead while the third-starting Herrington's start nearly spelled doom as he got into the wall on the first lap.

"It got pretty treacherous up there getting across a hole in the wall getting into (turn) one," Herrington said. "I was just trying not to get into the fence."

Herrington worked past Stevens to take command on the fifth lap, but there would be more obstacles. On a restart with nine laps remaining, Cade Dillard of Robeline, La., briefly slid past Herrington and into the lead, but Herrington made an impressive three-wide move to get back out front, keeping Dillard and a challenging Josh Putnam at bay.

"I appreciate (Dillard) racing my clean there," Herrington said. "I mean, that was the best slide job you could do without running over each other. I appreciated Cade. I've gotten to meet him a couple of times over the last couple years and you know it's fun to have a friend in the pit area, somebody that'll race you clean like that."

Dillard came from this seventh spot to try and track down Herrington, but he didn't have enough left in the waning laps.

"He was pretty good. Hat's off to those guys, I know they work hard," Dillard said. "By time I got up there to him, I'd done used up my right-rear tire. About after that last restart, I knew I had one shot, and I was going to be too (loose), which I was."

Herrington was thrilled for Magnolia to be the site of his first Super Late Model victory.

"The racetrack's always good. That's why I love coming over here," he said before running out of things to say. "I'm kind of speechless."

Perhaps June 17 should be a holiday for Chad Holladay. With Friday's victory at Columbus Junction (Iowa) Speedway, the 42-year-old Muscatine, Iowa, driver won on that date for the second straight season on the Hoker Trucking Series.

Holladay, whose victory 365 days earlier came at Eldon (Iowa) Raceway, set fast time and led all 25 laps of the main event from outside the front row.

"We started off strong here. We've had a few laps around this place. (To) start off with quick time there, that really helps, you know, and passed a few cars in our heat race (after) the invert. Started on the front row outside. That's where we needed to be," he said. "The track kind of took rubber early, so obviously, that's really important to be out front in that clean air. This Longhorn Chassis and the Bilstein Shocks, it was dialed in. About anybody could've drove that thing."

With runner-up Jason Hahne hot on his heels, Holladay did face a challenge in lapped traffic with virtually every competitor in the low groove.

"We ran in that lapped traffic there and I showed him my nose and he must not have seen it enough," Holladay said. "I just knew in that rubber, I wasn't gonna open the bottom (groove) up. If he was gonna have to pass me, he was going have to pass me outside in the dirty stuff. I was just trying to be, you know, mentally prepared on what I needed to do next, you know. I guess I had a door him to move him, that's what I would have had to do.

"But I knew there was only a couple of laps left and I think Mike, my crew guy, was kind of telling me what was going on. So I just tried to be patient and not do something silly." — Mike Ruefer

In continuing to streamline our race coverage, we've added DirtonDirt.com Dispatches to our list of regular features on the site. The idea of the new feature is to spotlight key storylines of the weekend (and sometimes during the week), putting notes, quotes and accomplishments in context to provide subscribers a quick-hitting read on all the latest from tracks around the country. Bear with us as the new feature evolves. Our intention is to have a single file that's regularly topped by the latest news, so check back throughout the weekend.