From team, series and track reports 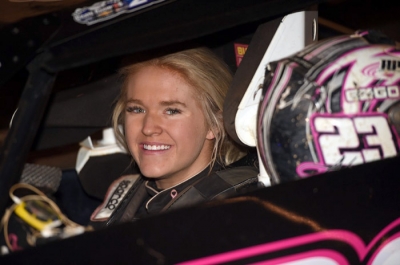 Citing changing life priorities, Late Model racer Ahnna Parkhurst of Evans, Ga., announced today she plans to climb out of the driver’s seat of her No. 23 at the conclusion of the season.

The 21-year-old Parkhurst started her racing career in go-karts at the age of 13 and eventually transitioned into Dirt Late Model divisions in Crate, Limited and Super competition in recent seasons with victories at nine tracks in four states in full-sized race cars.

“As I think about the next chapter in my life, I’ve realized my priorities have changed. I’ve been so blessed with a tremendous amount of support over the years,” Parkhurst wrote on her Facebook page. “In closing this chapter of my life, it’s been an amazing journey. I love the sport and especially the people. I will always be around racing, just in a different seat.”

“My racing career has been the priority for my family and I for the last eight years. I would like to tell my sister Sophia, my stepmom Poppie, my Mom in heaven and my Dad, thank you for everything you have done for me, and I love you all. To my crew, Tyler and Steven, you’ve given me the best equipment and support any driver could ask for,” she wrote. “When I started racing, I had zero experience, but I didn’t know at the time I had the best mentors from Day One. The McDowells (Sara, Shane and Dale), Austin Dillon and Ryan Gifford.”

Parkhurst, who won two Crate Late Model features in each of the last three seasons, also thanked her fans and sponsors supporting her team throughout her career. — Ben Shelton

Tyler Bruening of Decorah, Iowa, didn’t expect to enter the final World of Outlaws Morton Buildings Late Model Series event of the season as the Rookie of the Year and holding the third spot in the championship chase. But his consistency in the form of 12 top-five finishes and 27 top-10 finishes continued the 36-year-old driver’s elevation in the sport.

“To be honest, no, we really didn’t picture ourselves being third in the points and leading the rookie deal,” Bruening said. “But I knew we could do it as long as we had some things go our way, we had a little luck, and we’ve been able to piece together a lot of good nights, and it’s what you’ve got to do to contend for a championship and contend for those wins.”

“Obviously, we want to win every night, and we feel like we’ve got a good enough race car to do that every night,” Bruening said. “It's just sometimes things don’t go your way, and sometimes everything does go your way, and a little bit of circumstance is going against you. We’re right there; we’re definitely competitive enough to get that first win.

“You got to be consistent, you got to have good speed, and you’ve got to have a good handling race car to be up front to contend for those wins. We’ve had all of those things and pieces in place. It’s just literally just putting a whole night together.”

The Capital Race Car driver, who finished 12th on the Lucas Oil Late Model Dirt Series in 2020 in his first national touring attempt, will close his WoO season Nov. 4-6 at the NGK/NTK World Finals at the Dirt Track at Charlotte. He’ll make his debut on the 4/10-mile oval in Concord, N.C.

“To finish the year off the right way, to keep the momentum rolling into next year is definitely an important thing,” Bruening said, adding that he’s “excited for the environment and the excitement that particular event brings, and we’re really looking forward to it.

“It’s been a long year; It’s been a long season. It’s just the second time we’ve ran a full tour like this, and each year it’s getting better and better,” Bruening said. “So, we’re looking forward to finishing off the year the right way and keep that momentum rolling into 2022.” — Mike Warren

And after the 37-year-old Hughes had a spin and flat tire in the weekend opener, the 19-year-old Ross was still in contention in the tour finale.

“I was pretty nervous about that,” Hughes said of his Oct. 8 mishaps, saying his goal the following night was to stay out of trouble. "I had it in my head where I had to finish if Hayden won. Tonight was not about the battle, but about the war.”

Hughes finished fourth in the Oct. 9 finale, good enough to secure his fourth consecutive Sooner title in finishing 95 points ahead of Ross, who has 13-top-five finishes in 25 series starts in his second season of competition.

“We led the points for a while. We made some mistakes," Ross said. "I am OK running second to Kip. He is a great driver. It was a real consistent year."

In outpointing Ross, Hughes had plenty of obstacles in trying to continue his series reign.

“We had some motor problems (at Muskogee), and we crashed at Crawford (County Speedway),” Hughes recalled of his early-season woes. “We were out in Lubbock and Amarillo and had a motor lay down on us. We had one lay down here (in Muskogee). There were a lot of little things stacked against us. We just tried to be smart about it and do the best we could.

“Hayden worked hard and ran good all year long and we had some bad luck early in the year. It got us behind the 8-ball and we had to work our tails off. We just put our nose to the grindstone and got after it.”

Hughes, who led the series with eight victories in 2021 and has a tour-leading 26 career triumphs, said the fourth championship was the toughest.

“You would think it would get easier as time goes on, but it has gotten harder,” he said. “Everybody that races in the series has gotten better. I told my guys over the winter this year is going to be tough with guys moving up and getting better.” — John Rittenoure

• Lester Weeks of Friendsville, Tenn., who owned and operated Weeks Race Cars and Fabrication and was a member of the Smoky Mountain Speedway Hall of Fame, died Oct. 20 after a long battle with cancer. The father of veteran racer Mike Weeks was 67. Find a complete obituary at maryvillememorialfuneralhome.com.

• Next season’s XR Twin Ports Twin 25s at the Gondik Law Speedway in Superior, Wis., is worth a possible $5,000 for a single driver. Each 25-lapper on July 22 will pay $2,000-to-win with a $1,000 bonus for a sweep posted by Powers & Associates Optometrists. The event for non-touring WISSOTA racers is scheduled the day before Cedar Lake Speedway in New Richmond, Wis., offers a $5,000-to-win purse for unsanctioned Late Models just 120 miles away. USRA Late Models ($1,000-to-win) will be on the undercard at both tracks.

• Putnam Raceway in Satsuma, Fla., has added the Nov. 5-6 Beast of the East event that includes a $3,500-to-win program for the Late Model division. Prelims are set for opening night followed by the main event with several other divisions in action. Practice is scheduled for Nov. 4.

• Duck River Raceway Park in Wheel, Tenn., will remain dark indefinitely while owner Bob Harris recovers from a recent stroke, the track owner announced Oct. 20. The track, which ran its most recent event Oct. 16, had also been closed most of September while Harris faced health issues, including a bout with Covid-19.