Birky, O'Neal among '22 Hall of Famers 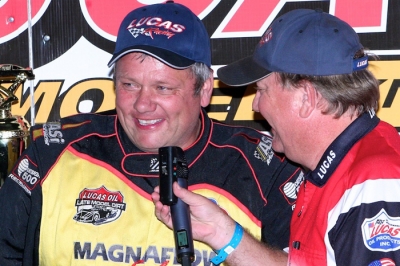 Don O'Neal (left) and James Essex (right) are in the Class of 2022. (rickschwalliephotos.com)

Contributors to the sport selected by Hall of Fame voters are Michigan’s Dick Beebe, founder of the MARC Times and the American Racing Congress, and 40-plus year announcers Rick Eshelman (currently with the World of Outlaws Morton Buildings Late Model Series) and James Essex (the lone announcer in the 17-year history of the Lucas Oil Late Model Dirt Series).

The retired Hartman will join his father, Butch Hartman in the Union, Ky.-based Hall of Fame.

The Class of 2022 is scheduled to be inducted Aug. 13 during the Sunoco Race Fuels North-South 100 weekend at Florence Speedway. A closer look at the Class of 2022 (listed alphabetically):

Brian Birkhofer, Muscatine, Iowa: A fan favorite, the driver with the engaging personality is best remembered for two historic last-lap victories over Hall of Famer Scott Bloomquist, one for his first World 100 win and another in winning his home-state’s Knoxville Nationals in 2014 in his final start for his self-owned team. Dozens of other major victories dotted a career that started in the 1990s including the 2012 World 100, 2004 Knoxville Nationals, 2009 Show-Me 100 at West Plains, Mo., 2007 USA Nationals at Cedar Lake Speedway, 2008 Firecracker 100 at Lernerville Speedway, $50,000 STARS Freedom 100 at West Virginia Motor Speedway and 2008’s Dirt Track World Championship at Ohio’s Atomic Speedway. Rarely a series regular, Birky spread success among several tours with the Lucas Oil Series (17 victories), DIRTcar Summer Nationals victories (12), Xtreme DirtCar Series (10), the World of Outlaws (seven) and NASCAR All-Star Series (eight) along with periods of domination at eastern Iowa special events.

Steve Boley, West Liberty, Iowa: The 60-year-old retired racer was among Iowa’s top drivers in the 1990s and early 2000s, including a career-best 2000 season where he racked up a series-leading 10 NASCAR O’Reilly All-Star victories en rout to the tour championship. His 23 victories on the tour is fourth all-time. The two-time NASCAR Weekly Series Regional champion (1993 and ’96) was also the All-Iowa points champion in 1998. Back-to-back Yankee Dirt Track Classic victories at Farley (Iowa) Speedway in 1999 and ’00 are among major victories along with the Liberty 100 at West Liberty (Iowa) Raceway in ’03 along with unsanctioned major events at Davenport, Winnebago County, Farley and other tracks. Boley, who also dabbled in NASCAR Busch Grand National and other asphalt competition in the ’90s, was among 26 starters in the 2001’s Eldora Million, an early retiree in finishing 23rd in one of two major-race starts at the historic Ohio track.

Bart Hartman, Zanesville, Ohio: The 52-year-old retired racer rose to prominence on the STARS circuit and blossomed into a national star whose biggest victories included Eldora’s 2009 World 100 and the 2001 Dirt Track World Championship, the last time the crown jewel event was held at Pennsboro (W.Va.) Speedway. Among more than 110 career victories, he also captured 1995's Hillbilly 100 at Pennsboro, the 2004 and ’09 Pittsburgher 100s at PPMS and the 2005 North-South 100 at Florence Speedway. An inaugural member of the World of Outlaws Dirty Dozen, he was a five-time WoO winner in the Rocket Chassis house car during the tour’s first modern-era season. He was also a three-time winner on the Lucas Oil circuit. The 1992 STARS Rookie of the Year had 23 victories on that circuit, ninth on the all-time list (behind eight Hall of Famers).

Mike Jewell, Scottsburg, Ind.: Among the most likable drivers in the pits with a smile and wave for everyone, the 63-year-old retired racer was one of Indiana’s fastest racers on the track in his No. 9, though most of his success came at central Kentucky tracks. A two-time Brownstown track champion (1991 and ’11), the two-time Battle of the Bluegrass champ ranked third in all-time series victories and blistered Kentucky foes for nine victories in Richmond (Ky.) Raceway’s Butterball Wooldridge Memorial. At Brownstown he was a two-time winner of the Hoosier Dirt Classic and winner of the Kenny Simpson Memorial. The MasterSbilt Race Cars stalwart also captured Florence Speedway’s Ralph Latham Memorial in 2004. Jewell was the Sportsman Award winner at the Hall of Fame’s 2007 inductions.

Don O’Neal, Martinsville, Ind.: The throttle-stomping O’Neal was among the sport’s most successful drivers during a 30-plus year career that included the 2014 Lucas Oil title, 2004 DIRTcar Summer Nationals championship, a $100,000 Dream victory at Eldora, back-to-back North-South 100 victories at Kentucky’s Florence Speedway and four Jackson 100 victories at his home-track Brownstown Speedway. The now-retired 57-year-old racer was successful on many tours and stands as the fourth-winningest Lucas Oil driver (46 victories), fourth on the Summer Nationals (39) and first on the Northern Allstars (28). His dazzling 2011 campaign in the MasterSbilt house car included lucrative victories at the Dream, I-80 Speedway’s Silver Dollar Nationals, the Knoxville Nationals and the Dirt Track World Championship at Ohio’s Atomic Speedway. The two-time Brownstown track champ (1992 and ’99) won nearly every one the track’s special events at least once, including five Indiana Icebreakers and six Hoosier Dirt Classics. He was a house car driver at various times for C.J. Rayburn, MasterSbilt and Barry Wright.

Dick Beebe: A jack of all trades in racing who served the sport in virtually every capacity, he was best known for founding the MARC Times Racing News in 1965 and five years later the American Racing Congress, which established universal safety rules. The Kalamazoo, Mich., native toiled at different times as a racer, groundskeeper, builder, pit steward, announcer, flagger, scorer, promoter, reporter and more while also serving as an official for organizations including NASCAR, USAC, CRT and more. Beebe, who was inducted into the Michigan Motorsports Hall of Fame in 1985, died in 2009 at the age of 76.

James Essex: The 58-year announcer from Greensburg, Ind., has been behind the mic for all but a few of more than 700 Lucas Oil Late Model Dirt Series events over 17 seasons, his voice synonymous with the national series with his calls of “Please stay green!” and “Are you kidding me?!?” Launching his career at Brownstown (Ind.) Speedway in 1977, the announcer during that track’s glory years later moved on to announce with the Northern Allstars Late Model Series and then Battle of the Bluegrass DirtCar Series. Along with voicing Lucas Oil events, many on national cable and broadcast outlets, Essex has also called the action for Eldora Speedway’s biggest events for the last several seasons. He’s also served in various PR roles in his positions as track and series announcer.

Rick Eshelman: The 60-year-old Michigan native has had two lengthy stints with the World of Outlaws Morton Buildings Late Model Series during an announcing career that has stretched 43 seasons. He’s called races at more than 170 tracks and more than 30 states and has been a regular announcer at dirt tracks including Eldora Speedway, Oakshade Raceway, Limaland Motorsports Park and River Cities Speedway in Grand Forks, N.D., where he was stationed during a four-year Army enlistment in the 1980s. He was the 2012 winner of the Tom Carnegie Announcer of the Year award at the 46th annual Michigan Auto Racing Fan Club Awards Banquet.