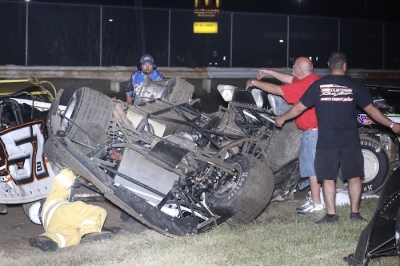 The work to clean up Knox County's lap-seven pileup. (brendonbauman.com)

A skirmish between the fourth- and fifth-running cars of Drake Troutman and Mitch McGrath triggered a scary, destructive multicar melee on the seventh lap of the 30-lap Diamond Ag Ed Sheckler Memorial, the tour's first-ever race at the half-mile fairgrounds oval. | Complete Summer Nationals coverage

Drivers fortunately escaped injury, but Donny Walden of Towanda, Ill., ended up on his lid — pushed down the track while upside down — and more than a half-dozen other cars ended up in a pileup at the end of the backstretch, one of the worst in recent series memory on a night when Ashton Winger became the first Georgia winner in tour history.

The chaotic scene, mostly blocked from the view of grandstand observers by haulers in the infield, was a mixture of heavily damaged race cars, hustling tow-truck drivers — and a few dazed looks from drivers wondering what just hit them.

"It was a fun night up until then," Walden deadpanned while surveying his wadded up race car.

Tail-starting Jason Feger spoke for many drivers when he summed up the mess.

"I don't know exactly what happened it happened so fast," said the Bloomington, Ill. driver, who was running 10th when he came upon a backstretch full of race cars. "Luckily I was able to somehow survive and somehow get a fifth-place finish."

An accident reconstructionist would've been hard pressed to piece together everything that happened, but a survey among several drivers indicated that the Troutman-McGrath contact evolved into a chain-reaction accident on the backstretch with cars going every which way in trying — and mostly failing — too avoid contact with other cars.

Ryan Unzicker of El Paso, Ill., was running sixth just behind the high-running Troutman's No. 7 and lower-running McGrath’s No. 74 and saw the two mixing it up.

"It was way back coming off of (turn) two is where it started and then (Troutman) got hit pretty good by (McGrath) in his left-rear so he started moving down," Unzicker said. "I was behind the 7 car, so I went to the right to stop from rear-ending the 7 car. I jerked it to the right then me and (Rich) Bell got into it and got squirrelly then everybody was kind of just jerking left and jerking right and getting squirrelly."

Hyndman, Pa.'s Troutman, making his second start on the series in 2021, called it a "racing deal" with McGrath.

"Everyone's trying to get to the top because that's where it's fastest at. I was up top and he came up on me and we got together there a little bit," said Troutman, who retired his overheating car with two laps remaining. "My car came down on me some, so I wanted to try to get out of people's way so something like that didn't happen. I tried to just stay right where I was at ... it's just racing, I guess."

The fourth-finishing McGrath said that he "didn't get a good restart there and (Troutman) got maybe even with me or ahead of me getting into the corner. It was just one lane there. So I tried giving him the top and I ran the bottom. And I probably did slide off of the bottom a little bit coming off (turn two), but I don't know what else we could've done."

Brandon Carpenter of Coldwater, Miss., was in the middle of the mess along with his father Dean Carpenter, who said he he couldn't see and "was right on it" before smashing into several cars.

"There was nothing you could do," Brandon Carpenter said. "I was coming out of (turn) two. It's so dusty and there's not really much light in the corners, and it's a little rough, too, coming out of two. And I looked up and I seen Unzicker ... facing the wall, facing the outside wall. He was sliding, I guess, down the track, but he was dead perpendicular with the wall. And everybody else was just trying to slow down."

Walden's car was "flipped up in front of me and I pushed him down the straightaway upside down another 20 yards," added the younger Carpenter as he checked out his battered car in the pits while a tow truck delivered his father's car to the next pit stall. "We're going home, there's no doubt about that. I think there's four or five destroyed cars out of that deal."

Walden walked across the backstretch during the cleanup to talk to Bell about the wreck as they tried to piece together what they saw — and what they didn't see.

"I'm fine. My head hurts a little bit, but I'm fine. The hits just kept coming. I don't think I hit (Bell) that hard, I didn't think I hit Richie that hard, but the hits behind me there just kept coming," Walden said. "I was getting a little worried because I was upside down there and fuel's spilling everywhere. I don't know how bad the car is, but it's just high speeds ... it's the max speed right where the crash zone was and it was the darkest part of the racetrack. It's unfortunate."

Feger took evasive action through the infield and suffered right-rear damage, but not enough to keep him from continuing after the 20-minute red flag.

"It's so narrow. You couldn't really see anything," Feger said. "I just saw Mark (Voigt) getting on the brakes and I seen somebody shooting right, it looked like into the guardrail. And I'm like 'Oh (no!)' I just tried locking up and doing the best I could not to wreck it, but I got really fortunate, definitely. It could've been a lot worse."

The conditions were conducive for such an accident, Unzicker said.

“It’s just unfortunate. It’s what happens when we race on bigger tracks like this," he said. "The lighting sucks. The track preparation wasn’t all that great. It was real spotty. Dusty in spots and (wet) in others. (The) cushion’s only 10 feet up the racetrack. They needed to grade it. I could go on and on. ... I don’t know how many cars were involved, but there was a bunch of them.”

Troutman remained sitting behind the wheel of his car several minutes after the checkers.

"It's a shame," the 17-year-old said. "A bunch of torn up race cars (while) just trying to battle for one position. It's a shame."

"The hits just kept coming. ... I was getting a little worried because I was upside down there and fuel's spilling everywhere. I don't know how bad the car is, but it's just high speeds ... it's the max speed right where the crash zone was and it was the darkest part of the racetrack. It's unfortunate."

— Donny Walden, whose car ended up upside down at Knox County Fair Raceway