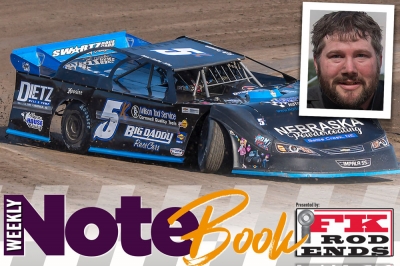 There are plenty of Dirt Late Model racers who jump into the division wallet first. Top-dollar equipment. The best of everything. Open checkbook. Maxed credit card.

Kyle Prauner is not that guy.

When the 34-year-old Norfolk, Neb., racer plotted to move from sport mods to Late Models in 2021, the father of a young family who has made sure to make ends meet when it comes to racing was fully aware that an older Late Model and second-hand components were the way to go.

“I did a lot of wheeling and dealing and swap-meeting and horse-trading and bartering,” Prauner said with a laugh. “And here we got a Late Model finally.”

But don’t think the budget-savvy driver simply wants to be in the full-fendered division. He wants to contend, and that’s exactly what he’s doing so far with a couple of IMCA Late Model victories at his hometown Off Road Speedway and other solid performances at two other nearby Nebraska ovals, U.S. 30 Speedway in Columbus and Boone County Raceway in Albion. Prauner’s success puts him atop DirtonDirt.com’s Weekly Notebook presented by FK Rod Ends and has injected fun into a racing career that had gotten a little staid.

“I’m a rookie, but I’ve still been racing for 18, 19 years. It’s coming around quicker and better than I actually anticipated, I guess,” Prauner said. “That was one of the things, too, getting out of the sport mod deal and into a Late Model, there’s no expectations. You’re running sport mods, doing a lot of winning and a lot of championships over the years, and there’s pressure, you know, to repeat, keep doing it, keep winning, right?

“It was nice to take a little load off and get into the Late Model class where, quite frankly, there was no expectations and not a lot of respect either, from some of the folks. They don’t think a sport mod guy has got any talent and is going to come up here and do anything — so that’s kind of fun, coming (into Late Models) and proving some of them wrong.”

Dumpert guided Prauner to one of his older cars — a 2012 Swartz Race Car that fellow Norfolk driver Ben Sukup was selling — and Prauner used proceeds from selling his successful sport mod to build a budget-conscious Late Model operation.

The car received fresh powdercoating and the family-based team went to work over every inch of the car. A former auto technician who recently took a job with Roth Racing Performance/Razor Chassis, Prauner went through the engine, transmission, rear end, quick-change gears and more to make sure all was in as good as shape as possible.

He spared no expense on fuel and electrical systems — “that’s stuff you don’t have to have problems with no matter what you’re racing,” Prauner said — but “pretty much everything on the car is used besides like the ignition box, the tandem pump and the springs. The shocks were used but revalved — they’re just not shiny, but they’re decent.”

He sometimes skips hot laps to save fuel, tires and engine wear (“I kind of get people looking at me funny that way, too,” he said. “A rookie in the class? You should be hot-lapping.“) He’s rigorous about his maintenance program to avoid breakages. And he competes on used tires as much as he can, although that’s backfired a bit.

“I just think we went probably a night or two too long on ’em (sometimes),” Prauner said. “We’re going to have some fresh tires on this thing more often. It’s just not worth it. You may be saving a buck not putting new ones on it, but what are you losing not finishing where you could? It’s all about lessons learned I guess.”

Prauner has learned his lessons pretty well by winning with a 9-year-old race car that some might dismiss as out of date.

“Yeah, I was a little nervous, for sure, getting an older car. But like I said, Cory Dumpert has helped us out tremendously, and he had a lot of confidence in me. He goes, ‘That car, that car will be just fine. You’ll get some wins out of it.’ He knew right away,” said Prauner, whose father Jerry, a former racer, serves as his crew chief. “Dad always said we do the best we can with what we’ve got.”

Prauner’s team has a handle on getting the best bang for the buck with the race car, but it doesn’t drive itself. He’s made adjustments behind the wheel.

“When (Late Models) drive nice, they definitely drive nice,” Prauner said. “But when they don’t drive nice, I think they’re a bit of a handful in my opinion.

“They always told me Late Models were easier to drive. I disagree — at least until (the June 3-5) weekend when you get it working really good. We’ve been kind of battling. Cory’s setup that he started us with was pretty darn good out of the gate, but I honestly get a little wore out with the thing some nights, ripping the lip and bouncing off the cushion and stuff,” he said. “It takes a little bit out of a guy. We might try a little lighter servo on the rack and it might make it steer a little easier. It’s not like I’m a little guy — 240 pounds, 6-foot. I can manhandle a race car, but I was just surprised. They’re just so aggressive on their setups. You’re just on that nose, you’ve got the left-rear in the air, and any little bump you kind of feel it on the bump-stop. They are a different animal to drive ...”

Keeping his race car straight on drier tracks is his bread and butter.

“As far as my driving style, I think that’s kind of why we’re showing some success here early. My driving style, actually, I like to drive straight. I think I would be a good pavement racer,” Prauner said. “I don’t like to hang the back end out — unless I have to. There’s situations, hammer-down racetracks or whatever, you gotta back ’er in there and stand on her, but I sure have a knack for the finesse of it. Kind of keep the rear end behind you, let the suspension do its job, let the rear end rotate and let the car do the work, right? It’s really kind of come to me when (the track) dries off. That’s the way I like to drive anyway, so that part of it is just pretty well natural, I guess.”

Prauner has sorted out his short- and long-term goals in Late Models.

“I guess the one- to two-year goal is to keep building up the money,” he said. “We race on sponsors and pay window, and just run as good as we can and try to save up enough money to eventually upgrade. Right now, I forecast running this car probably two years at least.

“We can squeeze a buck and we can turn a little bit of a profit running race cars. That’s just kind of what we have to do to keep our head above water and keep going. That’s the beauty part of Late Models, is you run for more money. Shoot, they’re handing us $500-to-win, which is great coming from sport mods where they hand you $250-to-win.”

“Traveling with (the Malvern Bank Series) would be a lot of fun,” he said. “I really dig the travel and seeing different tracks, different places, traveling the country. Now that my family’s a little bit older they’d be able to probably ride along more and do the family thing.

“That’s probably down the road here a little bit, but it’s still nice running (near home). This Norfolk track is literally five minutes from our house, so that’s pretty nice. It’s hard to beat that.”

• After switching his car to No. 777 — the digits used by his father and grandfather — Doug Drown of Wooster, Ohio, turned his luck around with June 4-5 victories at Attica (Ohio) Raceway Park and Wayne County Speedway in Orrville, Ohio.

• Madras (Ore.) Speedway is mourning the death of Late Model racer Robby Ulam who died at his Prineville, Ore., home. The driver who also competed in asphalt Late Model competition was 46.

• Three Late Model-connected inductees — retired driver Dennis Filliater, mechanic Tom Kistler and team owner Same Stites — were among 20 people joining the Fremont (Ohio) Speedway Hall of Fame on June 5. Filliater, a Fremont street stock champion, competed in the Limited Late Model division later in his 1986-2001 career. Kistler fielded and wrenched Late Models driven by Jack Hewitt and spent 20 of his 30-year mechanic career working on Late Models. Stites had most of his success in the sprint car division with championship- and race-winning cars driven by Harold McGilton and Daryl Harrison, but he also sponsored the Late Model driven by Hall of Fame racer Roy Sheets.

• Plymouth (Wis.) Dirt Track announced the death of former flagger and track worker Dave Deicher, the Plymouth resident who died May 31 at the age of 69 after a lengthy cancer battle. He competed for more than 30 years with the Eastern Wisconsin Stock Car association, including in the winged super modified division, and climbed into the flagstand after his retirement at Plymouth and Manitowoc. Survivors include his wife Judy, two daughters and three grandchildren.

• County Line Raceway in Elm City, N.C., is mourning the June 5 death of Linda Summerlin, who worked the grandstand gate at the Elm City, N.C., track for many years. The sister of track co-owner Carolyn Upchurch was 69.

• Engine builder Mark Batten of Rocky Mount, N.C., died June 3 at UNC Memorial Hospital in Chapel Hill, N.C., after a brief illness. He was 61. Batten, an employee of Eatmon Racing Engines for 20 years, owned and operated Battenbilt Racing Engines, which provided winning powerplants for Late Model racers in the Carolina and beyond for many years. “His zest for life and generous nature will be missed by all who knew him,” his obituary from Wheeler & Woodlief Funeral Home read.

Needmore Speedway, Norman Park, Ga. (June 12): A $2,500-to-win event for Southern Clash-style Late Models pays a $2,000 bonus to the driver with the best average finish between the weekend’s Waycross and Needmore events.