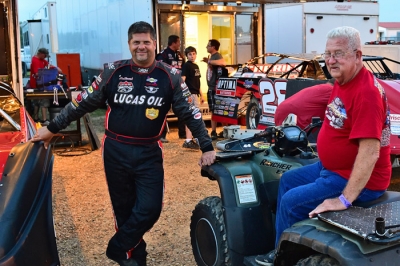 Earl Pearson Jr. and his father in 2014 in Columbus, Miss. (rickschwalliephotos.com)

WHEATLAND, Mo. (May 28) — Over the past five years Earl Pearson Jr. grew accustomed to one constant in his racing travels. No matter how he performed on a race night, the morning after each of his races on the Lucas Oil Late Model Dirt Series or at other high-profile Dirt Late Model events would always include a phone conversation with his father Earl Pearson Sr. to discuss the previous night’s race. | Complete Show-Me coverage

Racing this weekend for just the second time since his father died at 81 from complications of Covid-19 on May 16, Pearson is still trying to adjust to racing without those phone calls as he competes in Lucas Oil Speedway’s 29th annual Show-Me 100 presented by ProtecttheHarvest.com.

“About five or six years ago he slowed down a lot on the traveling, so there were a lot of phone calls after that because he was always waiting to hear from me so we could talk it over,” Pearson said of his father, who helped launch Pearson’s storied racing career when he was a youngster and supported him through his ascension in the sport in the 1990s followed by more than two decades of national touring. “Now, you look at your phone and you see that name right there and you just want to hit that button and talk to him. Then you realize you can’t. That’s hard. It’s just something I’m gonna have to get used to.”

Relatively healthy at 81, Pearson Sr.’s short battle with Covid was a shock to his son. Pearson was gone racing on a Lucas Oil Series doubleheader in Kentucky when Earl Sr. first became sick with the virus, and it was on one of those day-after phone calls that Pearson learned his father was ill enough to require a trip to the hospital.

“After Florence he called and said he was headed to the hospital,” Pearson said. “I got to get in there and talk to him before he went on the ventilator and he told me if things didn’t go right that he didn’t want us to leave him on (the ventilator) but a certain amount of days. … He was just getting worse and worse and weaker and weaker and we just had to do what we had to do as a family.

“It just happened so fast. You know, you’re not prepared for it. You can’t be prepared for it. He was always behind me 100 percent. Even when he was in the hospital, the way he operated, he would’ve rather seen me at the racetrack than sitting at home and going through all that. I mean, he wouldn’t even let my brothers and sisters call and say he was sick because he knew I would come home.”

Even though Earl Sr. didn’t want his son to miss a race on his account, that did end up happening after all when Pearson skipped the May 21 Lucas Oil race at 300 Raceway in Farley, Iowa, to attend his father’s funeral on the same day. Pearson, a four-time Lucas Oil Series champion who was among the drivers who supported the formation of the tour following the folding of the Xtreme DirtCar Series in 2005, had entered every series event until that point.

While Pearson was proud of his iron-man streak on the tour, he didn’t hesitate to end it in order to be with his family as they grieved the loss of their patriarch.

“I had a long go at it not missing a race with the Lucas Oil Series and the Xtreme deal before that in the early 2000s,” Pearson said. “I don’t even know how many consecutive races I’ve been in, but sometimes you gotta do what you gotta do in life. I know he didn’t want me missing a race, but I really thought that it was important. If there’s a reason to miss a race, this was it, because it’s tough to even think about racing after that. Hopefully I can get myself focused.”

Pearson made his return to the racetrack during Tuesday’s Castrol FloRacing Night in America event at Tri-City Speedway in Granite City, Ill. Any problems getting back focused were minimal as Pearson advanced from his seventh starting spot to record a solid fourth-place finish.

Friday’s doubleheader of Show-Me 100 prelims at Lucas Oil Speedway produced a mixed bag of results for Pearson. He made both features but dropped out of the opening race after an early tangle and ended up 24th. He rebounded in the second feature, advancing from his 18th starting spot to finish 10th.

“I knew I had to get back (racing) fairly fast because I know that was what he wanted,” Pearson said. “It’s tough now, but he would want me back out here. Hopefully this weekend we can have some good runs. We had a good showing there on Tuesday night in Granite City. We’ve done a lot of changing on this car because we’ve really struggled for a good year or year and a half now. Hopefully things get turned around for us.”

Regardless of how things go for Pearson at the Show-Me, the days following the race weekend at Wheatland will undoubtedly be strange for him. Not only will he not be able to have his postrace phone call with his father on Sunday, he’ll also miss seeing him toiling around his Jacksonville-area home helping to maintain the property so Pearson can focus on his racing career.

“While I’m out here racing, he was always at my house doing something for me, cutting my grass, doing this and that and just make sure everything was taken care of,” Pearson said. “Then I’d get home and he always had a project he wanted to do, and we always did it together. It would be building something or working on something, we would always do it together. When I got home, I always seen him there doing something to make sure things were taken care of. Now, just not seeing him there, that’s gonna be hard to adjust to for me.”

Even with all the time the father and son duo spent together, Pearson still wishes they could’ve had more.

“We done everything together, but there was days he’d come over to the house and he’d be out there doing something and I’d be inside and not go out there because I might’ve been doing paperwork or something,” Pearson said. “Now, I can’t tell you how much I wish I’d gone out there and spent that extra time with him. But it just happened so fast.”

While Pearson wishes he could’ve made more memories with his father, he’s thankful for the many they did make together. A significant amount of those memories were made at racetracks. A longtime racer at dirt tracks in Florida and south Georgia, the elder Pearson put his own racing aside as his sons came of age to help them get into the sport.

“My entire family he put us through racing,” Pearson said. “I’m here today because he got me into it, and two of my brothers today build go-kart motors for a living. I’ve got nephews in it and my son Trey’s racing. He’s the one that started it for us.

“He raced in south Georgia and Florida probably for 25 years back in the days of old school racing. He loved it. He won multiple championships around Jacksonville and south Georgia and then he took me and my brothers under his wing and eventually put me in a modified. And that’s where it started.”

Pearson learned many things about racing from his father, but the one thing that stood out most to him was his calm demeanor.

“He never really got mad about too much of nothing,” Pearson said “If he did, he never showed it. If we got out run, his mentality was you go back home and work harder and get faster. That was the way he operated.”

Pearson will also remember and cherish his father’s impact on others, especially in the racing community. That impact was made apparent by the outpouring of support from those who knew Earl Sr. from the races.

“The biggest thing is, he lived a good life,” Pearson said. “He was a true racer. A lot of times at the racetrack you’d see him sitting there and people would come by and just sit down and talk to him. He had a lot of great friends out here and the Lucas family, the Stuckeys, just numerous amounts of people in the pit area that knew him. I really appreciate all the people who called or text and sent flowers and everything else. It just means a lot to me and my family.”

“While I’m out here racing, he was always at my house doing something for me, cutting my grass, doing this and that and just make sure everything was taken care of ... Now, just not seeing him there, that’s gonna be hard to adjust to for me.”