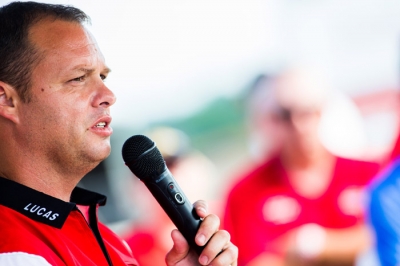 In his position as director of the Lucas Oil Late Model Dirt Series, Rick Schwallie is no stranger to unforeseen circumstances — i.e., the coronavirus pandemic, tornadoes, track conditions — forcing him to cancel or reschedule events.

But a fuel-supply shortage created by panic-buying in the wake of a gas pipeline shutdown? Now that’s a new one for his bingo card.

Schwallie’s latest dilemma, which prompted the cancellation of this weekend’s tour doubleheader at 411 Motor Speedway in Seymour, Tenn., and Talladega Short Track in Eastaboga, Ala., materialized, he remarked, “pretty quick on us.” He had noted media reports late last week of the ransomware attack that ceased operation of the Colonial Pipeline, which runs 5,500 miles from Texas to New Jersey and supplies gasoline, diesel and jet fuel to much of the East Coast, but he didn’t consider it a potential problem for the series until earlier this week.

That’s when Schwallie received word from a Lucas Oil Series regular that the Southeast was beginning to develop fuel-supply issues as the pipeline shutdown continued and panic-buying among consumers ran an increasing number of gas stations dry.

“It would’ve been Monday night we heard from Shane Clanton,” Schwallie said of the veteran racer who lives in Zebulon, Ga., outside Atlanta. “He tried calling me and I didn’t answer because I was busy on the phone with somebody else, so he called (technical director) Steve Francis and then Francis called and told me about Shane saying that it was a struggle to find fuel in his area.

“(Tuesday) I talked to both (event) promoters (411’s Mitch McCarter and Dirt Late Model star Dale McDowell, who was promoting the Talladega show) and we kind of recognized, ‘I guess we ought to pay attention to this a little bit,’ but it was nothing we were too concerned about.”

Come Wednesday, however, the situation escalated. Fuel availability across the Southeast had dropped too much for the promoters of two big-money national events in the region to ignore.

“(McDowell) was planning to head to Talladega (Wednesday) to meet with the new (track owners), Adam Stewart (and David Miller), down there, and before he got on the road we talked (in the morning),” Schwallie said. “I talked to Mitch McCarter at 411 (as well), and they were both taking it a lot more serious (on Wednesday) — and rightfully so. Just looking at what we were looking at, it appeared there was a lot more going on with it.”

Schwallie sensed the building trepidation of McCarter and McDowell, who both would be counting on long-distance travelers to comprise a large portion of their crowds. With uncertainty about gas availability in the areas surrounding the tracks, how many spectators outside the speedways’ immediate locales would feel secure enough to make the trip?

“Ultimately, it’s a racetrack that decides,” Schwallie said. “We’re all in this together — you win as a team, lose as a team, we always live by that — and we can advise the racetrack of what we see and what we feel like. But at the end of the day, when it comes time to go to the payoff window, the racetrack’s responsible for that and they have to be comfortable doing what we’re doing.

“So you hear them out. They’re our customers too as promoters, and Mitch and Dale had talked several times and then they patched me in on a three-way call and were ready to talk, and that (cancelling) was the decision they were at. And I support them.

“It is what it is,” he continued. “You hate to lose ‘em that way, but …and believe me, we had a perfect weather forecast for the weekend, so we felt like if there was any way we could have done this, we would’ve hung in there. It was a tough, awkward spot to be in.”

Schwallie pointed out that the situation presented more of a problem for fans than race teams and the Lucas Oil Series’s own transporters.

“We were less concerned about diesel fuel than we were about gasoline,” Schwallie said. “Most of our semi-trucks have either 200 to 300 gallons of fuel they haul when they’re full, so at 5 to 6 miles to a gallon, you can get a long ways on a tank, and if you planned that ahead of time, that’s not all that concerning. Most of our generators burn about a gallon of diesel an hour, and we’ve been doing that a long time to know. The truck I drive has a 300-gallon tank on it and a 50-gallon tank on the generator, so we’ll go all weekend on that wherever we go. I can practically go to Tampa (Florida) and back (to his home base in Batavia, Ohio) on that.

“For the most part, most of of our teams were prepared. We had talked to a majority of them; we hadn’t heard from all of them, but a lot of them had reached out or we had been in conversation with them, so the diesel fuel wasn’t as threatening as gas.

“I think in Dale McDowell’s and Mitch McCarter’s shoes, their most concerning parts were their regional or traveling fanbase that would have to go any more than a half-tank’s roundtrip to (attend).”

“We know it’s the situation we’re in and we’re starting to see more places without or with less fuel available,” Stewart said. “You have to depend on fans and racers from way outside your local region to make a deal like that work … we see that concern now and there’s no guarantee that it will be remedied by the weekend (despite the pipeline returning to operation on Wednesday). Like here in Cartersville (Georgia), we’re already out of gas at about every gas station on Highway 41. We are an hour and 45 minutes from (Talladega), and honestly, you need your 3- to 4-hour (away) crowd for a show like that to be successful.”

Stewart certainly would have relished the attention McDowell’s promotion of a $15,000-to-win Lucas Oil event at Talladega would have brought to the track, but he understood the situation.

“Things like the weather you can’t control, but this is way out of our control,” Stewart remarked. “I have a feeling that (the fuel-supply shortage is) probably way exaggerated and it may not be an issue at all, but (the panic-buying is) making it an issue and it’s got confidence shook in people that are normally not shook. I’m usually a carefree, go-with-the-flow, it’ll-work-out kind of guy, but it’s even got me concerned because I’m here with a motorhome and trailer to drive 9-and-a half hours (to a $10,000-to-win CRUSA event at Boothill Speedway in Greenwood, La., that was scheduled for this weekend) and I can’t get diesel fuel at the Love’s truck stop right here. So where do I go? Do I get over here and I’m able to (buy fuel) and then I’m not able to (buy fuel) when I’m on my way back?

“It’s not ideal because those kind of (national) events are very good for a racetrack. You don’t want to lose the prestige that comes with one of those kind of events, but you also have to be careful or that event could leave you sitting for the rest of the year too.”

Schwallie acknowledged that promoters have to be cognizant of the financial realities involved with hosting a major event.

“Even though we had a perfect weather forecast for the weekend, the promoter side, or the business side, of what they’re financially on the hook for, they’re looking at this as just the same as a large chance of rain as far as the risk,” Schwallie said. “That’s totally up to them. Once we pull in that gate, though, we’re expected to do it, and when we go to the pay window that night, these guys gotta get paid.

“It’s ultimately just a business thing. Our sport’s gotten big. Our purses are large (exceeding $50,000 on the low end). And the commitments the promoter has is rather deep, and I respect where they are at but I’m also proud of where we’re at. I’m proud of where our purses have gotten to.

“There’s a lot of people who have been doing this for a long time and will completely understand where they’re coming from. I stand behind them.”

“Honestly,” he added, “if we were in Kentucky or Ohio or anywhere else but the Southeast, it probably wouldn’t have been a big deal. We would have absolutely raced. Unfortunately, (the weekend’s location) put us in a bind.”

The Lucas Oil cancellations didn’t, however, trigger a rash of similar decisions among track promoters in the Southeast. Stewart announced later Wednesday that Boothill’s CRUSA event wouldn’t be contested due to the uncertainty involved with “10 to 15 guys driving 8 to 10 hours” from the Southeast — he hopes to reschedule the show sometime in the fall — and he decided not to run a regular weekly show at Talladega on Saturday that might put his “local racers under a burden to try to get there.” But McCarter said he would move forward with a weekly-division program on Friday for local racers and fans at 411 and the Southeast’s richest race of the weekend — Saturday’s $20,000-to-win Virginia Is For Racing Lovers King of the Commonwealth at Jamaica’s Virginia Motor Speedway — remained on as of Thursday afternoon.

Kelley Carlton, the director of the Ultimate Southeast Super Late Model Series that is sanctioning VMS’s event and a Friday-night affair at Natural Bridge (Va.) Speedway, said following the Lucas Oil announcement that VMS’s program is “full speed ahead” while also noting the track “confirmed that (gas) distributors are running tankers to fulfill needs and they still have gas at their tank farms.” Dave Seay, VMS’s marketing and public relations director, added that gas station outages in the area of the track weren’t widespread and he was expecting “that we will get a few more drivers and maybe a fan or two” with the Lucas Oil Series now idle.

While teams heading to VMS from the north and west would seem to be in good shape with fuel availability, their counterparts coming from south of the track might face issues.

Chris Ferguson of Mount Holly, N.C., noted that virtually all the gas stations in his home Charlotte area were out of fuel on Wednesday, but added that diesel supplies were sufficient (though lines at the pumps were “ridiculous”) and “we’re sitting OK” with his hauler’s fuel level to make the trip to VMS. Billy Hicks, the Mount Airy, N.C.-based car owner for Ross Bailes of Clover, S.C., acknowledged that “gas is tight” around his home but he wasn’t encountering problems obtaining diesel.

Ultimate Southeast points leader Anthony Sanders of Spartanburg, S.C., meanwhile, was ready late Wednesday night for his excursion to Natural Bridge and VMS but was also prepared to spend some extra time on the road. He doesn’t have a huge rig — he hauls his car on an open trailer — and estimated he will have to stop “at least 3-4 times” to fill up his truck’s tank. Fortunately his truck runs on diesel, but he told DirtonDirt.com it “will be an eventful trip” if he has trouble finding open gas stations or must wait in long lines at the pumps.

“You hate to lose ‘em that way, but …and believe me, we had a perfect weather forecast for the weekend, so we felt like if there was any way we could have done this, we would’ve hung in there. It was a tough, awkward spot to be in.”