ULMS founder on mend after accident in infield 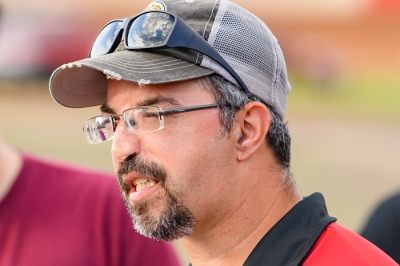 Zuver was on his four-wheeler in the infield when he was struck by a four-cylinder race car driven by his daughter Hannah, who was making her debut in the division for beginners during a practice session at the East Smethport oval in rural northern Pennsylvania.

Zuver described the ordeal, which required an airlift to a Buffalo-area hospital and an overnight stay for observation, as nothing more than a freak accident, just him “doing a good deed” that instead resulted in him “getting life-flighted.”

“My son and daughter were there racing the mini stocks in the kids class. This is their first year,” Zuver said. “We went into the infield on the four-wheeler and I was actually videoing my son Jacob and my wife was videoing Hannah. During the practice session and Hannah had some issues so she pulled into the infield" near the scales.

Moments later, when one of the cars on the track dropped its rear bumper assembly, Zuver decided to go retrieve the debris after the flagger threw a caution flag to slow the action. Flipping the caution light on his four-wheeler as he sat on the scales, “I looked over my shoulder and Hannah was still sitting there so I pulled off the ramp. About the time I looked over my shoulder she saw that the caution light came out and she looked up and saw I was still sitting there. When I pulled off the ramp of the scales I took a right heading to turn two. ... I never double-looked to make sure she was not moving and she didn’t look again to see that I didn’t move."

But both vehicles began moving simultaneously, and that's when the collision happened, said Zuver, who, despite his injuries, was primarily concerned for his daughter, who initially remained in the car while he was attended. He didn’t want her to shoulder the blame for the accident.

"That’s not her fault. She’s inside a race car. She shouldn’t have to worry about that and we just met in the middle. It was a freak deal," he said. "It was more my fault. She looked and saw that I wasn’t moving. I looked I saw that she wasn’t moving and we both ended up moving at the same time and we didn’t look again.

“I was laying on the ground there trying to figure out where my arm was at and she was sitting in the car strapped in and she thought she’d killed me. It was more my fault than hers. I made a mistake. Hopefully my mistake someone down the road will learn from it.

“It could have been worse. I could have been dead or paralyzed or had a bunch of broken bones and all that. I have a humerus bone in my arm that is severely broken and three broken ribs. That hurts the worst … every time I laugh or cough it’s awful pain.”

With his ULMS Northern tour scheduled to visit Sharon Speedway in Hartford, Ohio, on Friday and McKean County on Saturday, Zuver said it’s mostly business as usual for the series. Zuver plans to attend both events, though he’ll turn over his race directing duties to his 18-year-old son Trevor.

“Several drivers have told me that they would rather see him up there (instead of) me over the last couple years anyway, so now we’ll give it a shot,” Zuver quipped. “My son has basically been my pit steward. He’s been in the shadows learning from me for a little bit. Now he will have to step up and I will overshadow him a little bit. But he knows how I run the deal. I’ll just be there to listen and to give him some advice. It’s going to be his show to run so we’re passing the torch on a little bit, but it’s business as usual. The show goes on.”

Adding that he has confidence in his staff, Zuver said he hasn’t ruled out adding additional help if needed down the road.

“I have a really good staff. Most of our staff has been together for many years,” Zuver said. “Other people have reached out to me to see if I needed help. If I see a need to add one or two people, we’ve had several people reached out to me and I will not hesitate to reach out to someone if I need to, but for this weekend we’re going to move on with what we got. If I need to make a change later, then I will add somebody on board.”

Zuver is scheduled to visit an orthopedic surgeon surgeon Tuesday in Buffalo. For now, his arm has been reset to align the broken bone and he’s in a cast. He said that while they can’t operate on it now, they will make a determination next week to see if he will need a plate and screws so it heals properly.

“They haven’t really give me a timeline. Being realistic I’m looking at six to eight weeks (of recovery) probably,” Zuver said. “I’m feeling much better than I was Saturday night. I’m doing much better. My spirits are up. I’ve been very very humbled by the number of people who have reached out to me, many of them I do not even know who they are.

"It’s very very overwhelming. I got a message from (Lucas Oil Late Models Dirt Series announcer) James Essex the other morning. I’ve never spoken to Mr Essex before in my life. Just people like that reaching out to me and wishing me well has been overwhelming.”

“It could have been worse. I could have been dead or paralyzed or had a bunch of broken bones and all that. I have a humerus bone in my arm that is severely broken and three broken ribs. That hurts the worst … every time I laugh or cough it’s awful pain.”