Vaught adjusts to racing without a pinkie finger 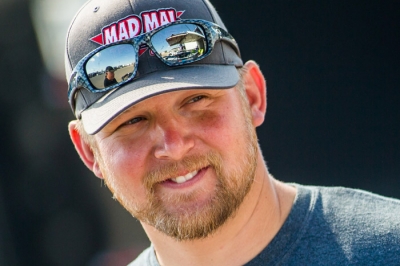 Just after the pandemic shutdown began last March, the 2019 Lucas Oil Midwest LateModel Racing Association champion broke the little finger on his right hand in a bike accident near his Crane, Mo., home. Vaught shrugged the injury off — at least for a while.

“That was just the beginning of a seemingly never-ending story,” Vaught said this week. “I was optimistic that it was nothing. I still had to work. I’ve broke fingers before, jammed fingers playing basketball and whatever. (But) this was pretty gruesome.”

After a few weeks, the pain proved too much and Vaught underwent surgery. A pin was inserted to promote healing, but the pain persisted. Vaught continued to work and attempted to race a few times, at first intending to try and defend his MLRA title once the schedule resumed in early summer.

“Every time I raced, my hand hurt so bad I couldn’t hardly concentrate on driving,” he said. “It was just a bad deal.”

The pin became infected and infected the bone all the way up to his knuckle. By August, Vaught underwent another surgery. The finger had to be amputated, in order to save his right hand.

“My wife said, ‘You have to go to the doctor.’ Obviously, I waited too long,” Vaught said. “Now, I still see that bicycle wreck every time I look at my hand.”

Vaught, 34, makes his return to MLRA action this weekend at Lucas Oil Speedway for the eighth annual MLRA Spring Nationals presented by RacingJunk.com. It’ll be his third consecutive week at the speedway, after a test session in late March followed by an outing in Larry Moon’s ULMA Late Model last Saturday, resulting in a feature win.

“I love the Moon brothers. They’re always fun to be around,” Vaught said. “But the biggest reason I raced was to see if I could still do it, one, and two see if we could still be successful at it."

Vaught said the extra track time should be something of an advantage this weekend, in what’s expected to be a large and talented field of entries.

"That was one of my old cars, that I sold to Larry," Vaught said. "The setup this weekend will be a little different, but I've been on that track three weeks in a row. It'll be different with so many cars there (this weekend) but I would think we'll have a little bit of an advantage because we've drove so many laps around it."

Vaught, whose 16 career MLRA feature wins are tied for 12th-most in series history, is simply happy to be in the mix and pain free. He admitted there were times last fall, after the amputation, that he wondered if his racing days might be over.

“A month or so after my finger was removed, it hurt so bad that I didn’t have any grip at all,” Vaught said. “Now, I can shake hands with somebody and be normal. But it was kind of depressing for a while.

“It took months before I could feel like I could yank on something or feel halfway strong. They said the little finger is about 40 percent of your grip. I did a lot of exercises. The last few months I’ve been working out, doing pushups and pullups and it’s come a long way. I don’t feel like it affects my everyday life now.”

While he’s pumped to be back on the race track, don’t expect Vaught to spend the year traveling up and down Midwestern highways and chasing MLRA points. With three kids playing sports and two businesses to operate, Vaught said he will pick and choose his racing opportunities.

“The businesses (Johnson Service Center and Circle V Auto Sales) are hopping right now and I feel very fortunate,” Vaught said. “We’ll race when we can and when we can afford it, but we’ll do it as a family and have fun when we race.”

He noted that 11-year-old son Maddox is playing basketball and baseball, 9-year-old daughter Mallory is into softball and volleyball and 3-year-old son Myles is just starting T-ball.

“We have our hands full, but it's great,” he said of himself and wife Ashtin. “You can only cherish this time once. I love racing, but … you can always race. You can’t have your 11-year-old and your 9-year-old that age but one time.”