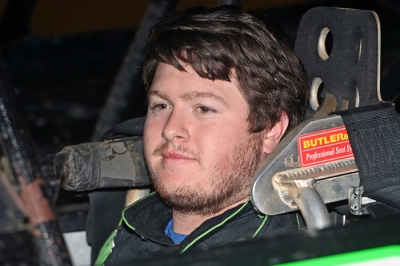 With two events remaining on the Crate Racin’ USA Winter Shootout Series, the sixth-year tour's points chase is heating up with the $2,500 title on the line.

The series is scheduled to head to Clarksville (Tenn.) Speedway on Feb. 26-27 for the Tuckassee Toilet Bowl Classic before wrapping up March 19-20 at Modoc (S.C.) Raceway.

Dylan Knowles of Lanett, Ala., holds an eight-point advantage (500-492) over Jason Welshan of Maryville, Tenn., in a battle that appears to be headed to a two-driver showdown. Each driver had a top-five finish during the tour's three-race weekend earlier this month at East Bay Raceway Park in Gibsonton, Fla.

Welshan struggled at the notoriously-difficult East Bay oval, but got pointed in the right direction on the final night with a fifth-place showing, which was his best finish of the weekend.

“I just wasn’t taught to race on a surface like this one,” Welshan said after the final race of the weekend. “It’s way different dirt than where I started. I’ve never been a wheelspin type of racer, but I can tell you people in my home area don’t have a clue unless they’ve been here previously. It’s a very challenging place, and I’ve never been anywhere in the country and applied the same stuff to either my car or my driving style that we had to use down here.

“I was very frustrated all week, but we never gave up and got out of here with a good finish on the final night. There ain’t no quit in my bunch, and while this racing deal can be the most humbling sport you’ll ever find, we kept diggin’ and we’ll definitely be back here, even though I said all weekend we’d absolutely never return. We’ll take the last night’s results as a positive, and head for the final two races.”

Knowles had better luck in his efforts, placing eighth, third and 11th in the three races at East Bay. It was a confidence boost considering his lack of experience at the track, and a bigger shot in the arm to emerge with the points lead.

“We planned to run the whole Winter Shootout Series from the start, and we came into the weekend at East Bay kinda down about our chances, but we ended up having a good weekend and taking over the points lead,” Knowles said. “It’s been a learning experience for us, and especially at both Volusia and East Bay. We were pretty confident we could run good, and we’re maybe feeling a little better now about our team and equipment after having a good weekend. Leading the points is a real good feeling, but it’s far from over.”

Knowles will have to maintain that slim lead over Welshan heading to Clarksville. The final two races will also put both competitors back on more familiar dirt as they prepare for the big showdown.

“I really like this short Winter Shootout Series deal,” Welshan said. “It’s something we can do before our season unfolds and gets busy back home, and it’s been a good deal to showcase our Savage Chassis brand. Dylan has done a great job and has the points lead, but we’ll work hard right to the end. We’ve helped each other back and forth, and it’s fun when you can race this hard for a championship with a guy, and still be willing to help each other. It’s gonna be a real doozy before it’s over, and I’m definitely looking forward to racing against him for the championship. It’s looking like it’s gonna come down to the finale at Modoc, and we’ll probably see a close battle to the finish.”

Knowles admitted he felt that Welshan might have the slight advantage at Clarksville considering his past success at the facility, but the two drivers might be more evenly matched when the miniseries hits Modoc for the finale.

“We’ve really been wanting to get the opportunity to race for a championship like this one,” Knowles said. “We’ve raced for track championships a few times, but never anything on this level. Until this deal here, we haven’t really run seriously for points over the past five or six years.

“It’s probably going down to the end, I’d think,” Knowles continued. “It’s a pretty close points race right now, and it’s great to be leading since we’re about to head into the final two races, but I’d have to guess it’s far from over. It’s been a really close battle the whole way, and it’s definitely fun for us to be in the middle of it.” — Brian McLeod

EARLY BIRDS AT ATOMIC: Fans purchasing tickets in advance for March 19's Lucas Oil Late Model Dirt Series visit to Atomic Speedway near Chillicothe, Ohio, will get special treatment at the national touring event. Each pre-sale ticket buyer gets to enter the gates one hour early on race day and can choose any seats that aren't reserved. General admission is $30 for the seventh annual Buckeye Spring 50, which pays $12,000-to-win. Visit atomicspeedway.net for details.

VOLUNTEER SPEEDWAY FOR SALE: Volunteer Speedway is up for sale, according to owner Landon Stallard, who plans to continue operating the 4/10-mile Bulls Gap, Tenn., track until it's sold. Stallard, who operates an industrial crane and rigging company in Kingsport, Tenn., purchased the 47-year-old track from Joe and Phyllis Loven in May 2019. In a Facebook announcement on his personal page, Stallard said he "put my heart and soul into the place to make it the best it could be for the fans and the teams," but the track has taken too much time from his business and family. "I’m confident someone will end up with it that can carry on what we have going well into the future." Contact Stallard at landon@volunteerspeedway.com.

TIMM CHASING MLRA ROOKIE HONORS: Jake Timm, 24, of Winona, Minn., has thrown his helmet in the ring for the Sunoco Rookie of the Year title on the Lucas Oil Midwest LateModel Racing Association, the series announced. The modified standout who has stepped into Late Models in recent seasons will pilot his Hurco-sponsored MB Customs Chassis powered by an OFI Performance powerplant. "I’d say (Late Models) drive nice when they are set up right, but when they’re not they are a handful to drive," said Timm, who had seven MLRA starts last season with a best finish of ninth. "They are definitely a lot faster and it seems like things happen a lot quicker.” Timm joins fellow MLRA rookie candidate Justin Reed of Camp Point, Ill., in the series chase with more rookies expected to announce their intentions. The series opens April 9-10 at Lucas Oil Speedway in Wheatland, Mo.

WEST GEORGIA RENOVATIONS CONTINUE: New West Georgia Speedway owners Mayes Massey and Doug Stevens are planning several improvements at the Whitesburg track before the April 3 opener. A track reconfiguration includes removing an interior guardrail and developing more progressive banking in the corners. "My plan is to give the drivers more room to race and more options to pass," Stevens said. "I want to eliminate a single-groove track. It's always been a fast track with a lot of bite. We want to keep it that way while at the same time creating the space and multigrooves for the race teams to find their sweet spot." Other changes include a new drainage system in the infield, where the pits have been removed but the tech area, scales, victory lane and staging area will remain. Plans are to expand the pit area outside turns one and two, giving spectators a bird's-eye view of teams working on their race cars. Visit wgsracing.com for more track information.

PENNSYLVANIA TRACK ADDS RUSH SANCTIONING: The Hill Speedway in Monroeton, Pa., which ran nine unsanctioned Crate Late Model events in 2020, has added RUSH sanctioning for the division in 2021. The quarter-mile oval plans as many as 21 Crate Late Model events starting with its April 9 opener. A remodeling of the facility continues under promoter Eddie McKernan, a former street stock racer who added 240 loads of clay to the track. Steve LeBarron is the track's reigning Crate Late Model champion.

RECENT DEATHS: Former standout racer Buddy Norwood of Knoxville, Tenn., died on Feb. 12. He was 72. Find a complete obituary at bridgesfuneralhome.com. ... Bob Heffner, who covered racing at Rice Lake (Wis.) Speedway for many years as a reporter for the Rice Lake Chronotype, died Jan. 23. The track Hall of Famer was 89. ... Leon Carter of Tulsa, Okla., a chief steward for the Late Models on the National Championship Racing Association in the 1980s and '90s, died Feb. 4. He was 80. ... Mike Yeaple, a corner worker at Pennsylvania tracks including Williams Grove Speedway and Lincoln Speedway, died Feb. 18 after a battle with cancer. He was 50.

SCHEDULE CHANGES: The Carolina Clash added a Sept. 25 event at Fayetteville (N.C) Motor Speedway. ... The Topless Outlaw Series added an Aug. 7 event at Senoia (Ga.) Raceway and plans to add two more races soon. ... The Steel Block Late Model Series has added a July 17 event at 35 Raceway Park in Frankfort, Ohio. The series also announced that June 11's event at Ohio Valley Speedway in Washington, W.Va., would pay $2,000-to-win if the tour has the most cars of any division that night.

ODDS AND ENDS: Cla Knight of North Augusta, S.C., has announced plans to run for Rookie of the Year on the Ultimate Southeast Super Late Model Series. ... The Georgia-based Fastrak organization announced it will sanction weekly 602 Crate Late Models in Alabama, Georgia and the Carolinas; no weekly tracks were specified but Fastrak also plans to sanction the 602 Crate division for June 18-19 action at the Dirt Track at Charlotte in Concord, N.C. ... The Comp Cams Super Dirt Series has added FloRacing and Dirt Track Bank as sponsors for 2021. ... Late Model racer Jim Scuse of Asheville, N.C., has added sponsorship from Silver’s Auto Service for 2021. Scuse plans to open his season March 13 at Travelers Rest (S.C.) Speedway.