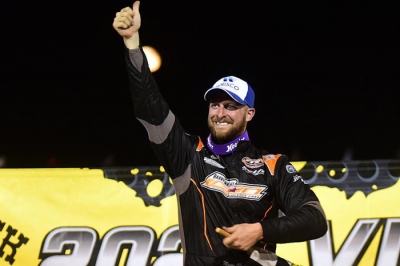 When Mason Oberkramer returns to Lucas Oil Speedway this weekend, he might have a bit of extra swagger to his step. After all, he finally was able to conquer his nemesis on his last visit to the picturesque Wheatland, Mo., oval.

Oberkramer captured the Ron Jenkins Memorial on the Lucas Oil Midwest LateModel Racing Association over Labor Day Weekend, a $6,000 triumph that meant a lot more than money to the 28-year-old Late Model driver from Broseley in Missouri’s Bootheel. It not only was his first career victory at Lucas Oil Speedway, but his first on the MLRA circuit.

“It was a pretty big win for me,” Oberkramer said. “Like I said at the track that night, I had been battling Wheatland for four or five years. It seemed like I always had a good car, but never could capitalize on it. Just to be able to finally land one and for it to be a big memorial event like that, it was awesome.”

It’s been a little different kind of year for Oberkramer, as he’s not been chasing points. With a busy work schedule as part of the family business, Oberkramer Trucking, he said it’s been fun to “go race when we’re able to go race.”

In nine MLRA events in 2020, Oberkramer has four top-10 finishes, including a sixth one night after the win as the MLRA series visited Randolph County Raceway.

“We’ve had a pretty good year,” Oberkramer said. “We’ve run a few big shows and made them. We didn’t make the Show-Me (100), but had a good car. We’ve had a good car most of the year. This new Barry Wright car, it seems to fit my style and we kind of got a grip on it about midyear.”

Oberkramer, who’s been racing Late Models since about 2010, said any Late Model win is truly extra special because they are so difficult to come by.

“It takes everything to line up just right these days,” Oberkramer said. “You can’t just show up and win a race any more. I don’t care if it’s Jimmy Owens or Scott Bloomquist, none of them just show up and win. Everything has to play in your favor, and if not, it’s a battle.”

Everything lined up for Oberkramer on the last visit to Lucas Oil Speedway, where he had a strong showing in time trials and won his heat race to start inside of row two in the feature. He took over the lead from Justin Duty with 11 laps remaining and held on from there, including after a restart with two laps left.

“We unloaded our normal package there, we timed in good and had a strong heat race and that put us up front of the feature,” Oberkramer said. “It was just a good night. Things fell our way.” — Lyndal Scranton

With only five MLRA events remaining, the championship chase is heating up. Republic, Mo.’s Payton Looney, winner of the Show-Me 100 back in July, is leading Chad Simpson by 57. Jeremiah Hurst also is in title contention, just 77 points behind Looney.

Looney had some mechanical issues the last time the MLRA series was at Lucas Oil Speedway, finishing fourth at the Ron Jenkins Memorial on Sept. 5. Motor issues in the next event, at Randolph County Raceway in Moberly, Mo., led to a rare DNF that tightened the points chase down the tour’s home stretch.

The motor has since been freshened and Looney is optimistic for what’s ahead.

“Hopefully we can come out a little bit stronger and no mechanical failures and give it our best shot these next five races,” Looney said, noting that keeping an even-keel approach is important over the course of a season.

“You just don’t let anything like that affect you or change what you’re doing,” he added. “You can’t hit the panic button and change the stuff that got you there in the first place. You just put your head down and keep doing your thing.

“Just win. I feel like if you can go do what you’re supposed to, and win races, the points battle will take care of itself. I haven’t really looked at the points all year long. If I started now it’d be bad luck and put me in a bad position.” — Lyndal Scranton

Simpson would’ve drawn even closer than his 57-point margin Sept. 6 at Randolph County Raceway, but a flat tire sent him pitside with troubles of his own. He rallied to finish ninth and remains in contention for his third series championship.

“Before we went into that last swing 120 points out I was feeling pretty confident about the car and things, but honestly didn’t expect to pick up the points that we did that last weekend,” Simpson said. “To close the gap half down it has our guys feeling pretty excited and has everybody fueled back up and fired back up.”

Hurst has podium finishes in three of the last four races and last month had a $5,000 DIRTcar Summer Nationals victory at Peoria (Ill.) Speedway.

“We have gone through the whole car to make sure we check all the things that might break ahead of time,” said Hurst, who competes for Roberts Motorsports along with teammate and fellow MLRA rookie Garrett Alberson. “That’s the thing that could take us out, just like anything, one bad night. I’m looking forward to getting back to Wheatland again, and hopefully with that practice (Thursday) we can get ahead of the ball game when it comes to qualifying.

Hurst is ready for his come-from-behind charge in the points chase.

“Yeah, I have things to lose, but I look at it as the big picture,” Hurst said, “and I got a bigger goal ahead of me than what I set out for at the start of the year.” — Billy Rock