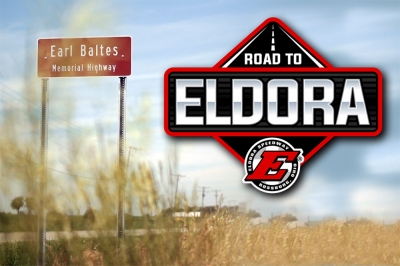 On the Road to Eldora from late August through early September, DirtonDirt.com and FloRacing staffers are visiting teams, drivers, shops and racetracks as Dirt Late Model racing's focus heads toward Eldora's Intercontinental Classic:

First in line at Eldora (Sept. 9): Mark Richards and the Rocket Chassis house car is nothing if not prompt, so they're always near the front of the line for the track's biggest races.

Earl's house (Sept. 9): Eldora's Roger Slack reveals the story of the house on the Eldora Speedway property where Earl and Berniece Baltes lived for so many years.

No Eldora for Terbo (Sept. 8): With a DIRTcar suspension keeping him out of action at Eldora, Ohio-based driver Tyler Erb reflects on his weekend with plans to race elsewhere.

Wagon Wheel (Sept. 8): The Wagon Wheel Nite Club in Burkettsville, Ohio, is a popular stop among Eldora racers and fans.

Crew chief and brother (Sept. 7): Wylie Moran discusses his career as a crew chief and working with his brother and driver Devin.

Muskingum County Speedway (Sept. 7): Devin Moran gives a tour of not only the family's full-size track, but the nearby go-kart track where the action is hot and heavy.

Moran Slip 'N Slide (Sept. 7): Among the hi-jinx around the Moran property is a Slip N' Slide layout that serves as beach time in Ohio

Wenger by a straightaway (Sept. 5): Fairbury driver McKay Wenger, who has a new catch phrase, talks about growing up at his hometown track, and now being a winner and track champion.

The throngs at Fairbury (Sept. 5): Gunner Sullivan, long time a part of operations at Fairbury Speedway, tours the grounds of campers at the fairgrounds oval.

Walking to Fairbury (Sept. 5): Derek Kessinger recreates his walk to Fairbury Speedway from his childhood home that he took hundreds of time.

Ol' Shannon Babb had farm ... (Sept. 3): Shannon Babb is a familar face to fans in the pits of dirt tracks across the Midwest. He's a familiar face to various critters around his family farm in Moweaqua, Ill.

Squirrel drives to the track (Sept. 3): Derek Kessinger enjoys a ride to the racetrack, well, at least until a flat tire on the hauler hampers Brian Shirley's journey to Farmer City.

The Flatland Flash (Sept. 3): Hall of Fame driver Kevin Weaver of Gibson City, Ill., discusses his lengthy career racing at Farmer City Raceway and how racing's changed over the decades.

Where the magic happens (Sept. 2): DirtonDirt.com co-founder Michael Rigsby provides a tour of DirtonDirt.com's studios and the home base for the 13-year-old company.

Relaxing at the lake (Sept. 1): Down time doesn't come often for racer Bobby Pierce, but he enjoys watersports at his lake home, football and video games when he's away from the track.

The son of a racer (Sept. 1): Bobby Pierce and his father Bob discuss the benefits, and difficulties, for a father-son racing team and reveal the beginnings of the Pierce Posse.

K-Rob's race shop (Aug. 31): Robinson gives a tour of his race shop and talks about how special Eldora Speedway has been to his career.

Talking about the car wash (Aug. 30): Richmond, Ind.'s Steve Casebolt shows us his car wash, one of many businesses for the diversified racer.

Casebolt's race shop (Aug. 30): Casebolt's favorite keepsake after a victory? A big check he can post on the wall of his race shop.

Larson's reaction to debut (Aug. 28): Kyle Larson discusses his Late Model debut and his initial reaction to his first experience in the full-fender car.

Port Royal neighbor (Aug. 28): Have you seen the house behind the Port Royal Speedway backststretch? Dustin Jarrett talks to one of the track's neighbors.

The Speed Palace (Aug. 27): Promoter Steve O'Neal talks about the transformation of Port Royal Speedway into one of the best dirt tracks in the country.

Razor Steve of Port Royal (Aug. 27): One of the five Steves at Port Royal, "Razor Steve" gives Dustin Jarrett a lesson on how the crew preps the half-mile oval.

Veronica and Zack (Aug. 25): Zack Dohm may be behind the wheel, but Veronica might be running the show (and letting little Will know which opposing drivers he can like or not).

Hoops with Billy Moyer Jr. (Aug. 24): Besides his love for racing, Billy Moyer Jr. is also a big basketball fan and has become a dedicated fan of the NBA's Memphis Grizzlies.

BMJ Enterprises (Aug. 24): Billy Moyer Jr. discusses moving out of his father's shop and into his own race shop in his his Batesville, Ark., hometown, where he offers other racing services along with maintaining his race equipment.

Billy Moyer Jr. on fatherhood (Aug. 24): The son of one of the best (and longest-traveling racers), Billy Moyer Jr. reflects on becoming a father himself and balancing it with his racing career.

Grand Central at Moyer's (Aug. 23): Often on Topless 100 weekend in Batesville, Ark., Billy Moyer's race shop has often been the place to congregate.

Billy Moyer war room (Aug. 23): Hall of Famer Billy Moyer shows off his Batesville race shop where the magic has happened over the years.

Billy Moyer trophy room (Aug. 23): Six-time World 100 winner provides a personal tour of the room that holds his six-globed trophies and hundreds of other trophies and awards.

McDowell goes Topless (Aug. 22): Dale McDowell of Chickamauga, Ga., talks about going topless (in his race car) at Batesville, his early years as a touring racer and competing at Eldora without fans.

Batesville Bullet (Aug. 21): Hall of Fame driver Wendell Wallace, among the fraternity of standout Batesville, Ark., drivers, discusses his hometown, his racing career and his connections to the late Joe Garrison and GRT Race Cars.

Batesville aura (Aug. 21): Standing atop the hillside grandstands at Batesville Motor Speedway, Ben Shelton discusses the track's aura, along with some highlights from the Topless 100, the track's biggest event.