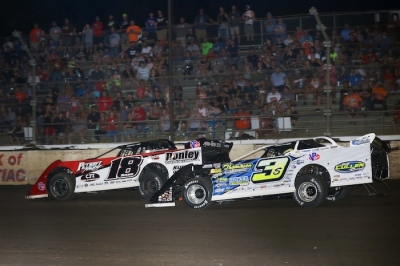 FAIRBURY, Ill. (July 11) — Brian Shirley isn’t sure he could’ve held off Gordy Gundaker’s impressive low-groove charge Saturday at Fairbury Speedway. But the Chatham, Ill., driver would certainly like to know what might’ve happened if he hadn’t made the mistake of giving Shannon Babb the high groove after a lap-32 restart. | Complete Summer Nationals coverage

“The wrong move at the wrong time,” a disappointed Shirley said after he led the first 32 laps but settled for a fourth-place finish in the 50-lap DIRTcar Summer Nationals feature. “I should’ve went in there, I knew better than to go in there on that restart and (not) blast the top. I blasted the top for 30 laps."

The 39-year-old’s failure to capture his first Summer Nationals victory of 2020 — he’s the tour’s three-time and reigning champion — is magnified as Shirley is trying to dig out of struggles during what he’s termed as a reset of his racing program for car owner Bob Cullen.

Shirley got off to a hot start in 2020 with three victories at Arizona’s Keyser Manufacturing Wild West Shootout and had a respectable start on the Lucas Oil Late Model Dirt Series. But his performances lagged when racing returned from the coronavirus shutdown and Shirley elected to abandon his Lucas Oil chase in early June, the same time he split with veteran crew chief Anthony Burroughs.

He’s still looking to recapture the success of recent years, including seven Summer Nationals victories and a title in 2019.

“What I really believe it is, I’ve been lucky for the last two years,” Shirley said. “I’ve had a program that I’ve lived on and it’s worked pretty good, and people have just caught up. So now, the last couple of months, going through some transitions with crew guys, stuff like that, you know, trying to find out what I need, you’re testing some nights and you’re not looking good. I’m still trying to find an edge that’ll get me back to the front.

“It’s just everybody getting better. I can’t live on the same setups that I ran the last few years. I’ve gotta try and work to get better.”

It’s a work in progress, but Shirley called his Fairbury performance — his best in three Summer Nationals races so far — “a high and a low.”

“I’m happy that we were competitive for the win, but I know how hard it’s been the last month of not running really well," Shirley said. "These races, to be good, they don’t come along this often to have a car that can win the race. Not that we won’t contend — we’re going to contend for other races — but Fairbury’s a big race. It’s $10,000 and not all these races pay as good as tonight did. … so we’ll live and learn.

“My guys are doing outstanding. Will and Aaron and (car owner) Bob (Cullen), them guys, he hasn’t given up on me by no means, (even though) we’ve had a tough run here as far as getting the car back to where I’m comfortable.

“(Cullen) gave me the opportunity to get out here and race and learn and figure out what I need to do. We’re showing that. I mean, we’ve gone back to setting fast times and finally winning heat races again, we’re starting to lead some features. … we’ll put it all together. We’ve just gotta keep racing.”

But it may take Shirley a few nights to put his miscue at Fairbury out of his mind. He led comfortably early in the race, then fought off challenges from Babb mid-race as the high-flying frontrunners worked around lapped traffic.

Shirley knew his spotter had been encouraging him to drop to the bottom of the track, but he was torn about that strategy after running so well up top. His fateful decision came on lap 33 for the race’s lone restart when Shirley elected to stick with the low groove.

He knew almost immediately he’d broken a cardinal rule of how to race with four-time Summer Nationals champion Shannon Babb.

“I tell myself every time, on a restart, if the 18 is behind you, you’ve gotta go to the top,” Shirley said, spicing his disgust with a few four-letter adjectives. “He’s going to be there. It’s Shannon Babb. My crew guy is young and he didn’t know and didn’t understand.

“It’s emotional because, I know what I needed to do to win the race, and I didn’t do it. All I needed to do is go up there and make about three laps and then get back down to the bottom where my tire would heat back up.”

Shirley pulled alongside Babb a few times in trying to regain the lead, but he was never successful.

“I could get to Babb, but I couldn’t go in there and slide (past) him and I couldn’t clear him, then me (messing) around trying to find a line to be better to get him, that just let Gordy get to me because he was better hugging the bottom, and I’m out there in the middle trying to find grip.

“I never want to say I should’ve won, because obviously I didn’t win. But I felt good enough in the car to win. Obviously Gordy won, and I never take anything away from a guy that wins, but I felt like I had the opportunity in the steering wheel to do the job, and I did a bad job.”

“I tell myself every time, on a restart, if the 18 is behind you, you’ve gotta go to the top. He’s going to be there. It’s Shannon Babb."