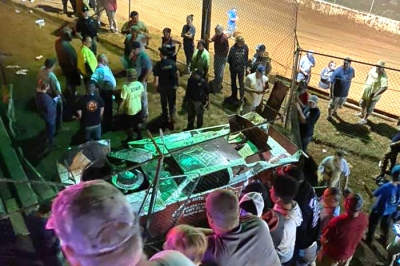 Four suffered injuries when a car went through the fence. (Tyler Bowie)

Two spectators were MedFlighted to Prisma Health Greenville (S.C.) Memorial Hospital and two more transported to a local hospital after a Limited Late Model driven by Mike Kernells of Hodges, S.C., climbed the turn-four wall at Laurens County (S.C.) Speedway Saturday night, crashing through the fence and into a section of pit area bleachers near the front straightaway.

The two victims who were airlifted — Ziyuana Miller, 24, and Summer Howard, 17 — were treated for non-lifethreatening injuries and are expected to recover. The two transported by ambulance were checked out and released, one with only minor bumps and bruises and the other with a broken rib and bruised lung according to track office manager Brandi Hurley, whose husband Danny Hurley and father-in-law Danny Hurley Sr., promote the 3/8-mile facility. Video and photos from the accident were shot by fans higher in the grandstands and posted on Facebook.

“A family of four … they were sitting in the pit stands and the dad had said, ‘Let’s go, it’s time to go.’ He got up to leave and the kids were following him,” Brandi Hurley said. “So if you see man jumping (in the video) when the car came, because the fence kind of gave away, he only got some scratches on his leg and some meat taken off his leg.

“The kids I guess had started trying to come down (the bleachers) and one landed on his hands and feet. He had no injuries whatsoever. One, I’m not sure what injuries he had but he was released rather quickly from the hospital, and then the little girl, she had a concussion, a bruised lung and a broken rib and some facial scratches.”

“There was another lady sitting on the front row. She broke both legs. Then there was a teenage girl, or almost adult, she had some numbness in one of her legs and some tingling in the other, some back pain.”

Miller, who suffered breaks in each leg and is expected to remain hospitalized for up to two weeks, was upbeat during a 48-minute Facebook live session on Monday as she assured friends and family that she was indeed OK. A GoFundMe account has been set up to help with Miller’s medical expenses and other expenses while she recovers.

“I just wanted ya’ll to see how good God is … and that I’m a living testimony,” Miller said via her Facebook session. “I’m alright ya’ll. If it had not been for the Lord who was on my side. He said he wasn’t ready for me yet.”

According a post on Howard’s mother’s Facebook page, Howard was released from Greenville Memorial on Monday afternoon after undergoing an MRI and consulting with a neurosurgeon and an orthopedic surgeon, but returned to the hospital Wednesday due to continued pain, the result of “a rupture(d) disc in her lower back” according to a Facebook post on Wednesday.

In a phone interview on Tuesday, Hurley praised the quick response from the track emergency personnel.

“Patty (Canupp), our EMS lady, has been with the speedway for years,” said Hurley. “As soon as she saw what happened, she immediately called out and ordered a helicopter without even seeing (the victims) at all because she knew it was probably going to be bad. Her supervisor, Matt Pennington, heard the call go out and ordered another helicopter. We had three nurses there, two racers’ wives and one fiancé and they immediately came out of the pits and started helping our staff.

“Usually when something bad happens, at home or wherever, it seems like it takes an eternity for EMS to get there, or police or anything. It was nothing like that. By the time I got over there, they had everybody assessed and what was going on. The police were there in no time flat. They were wanting to know where was a landing spot for the helicopters. He said, ‘Take me to it now so I can see if there’s any power lines (or obstructions).’ In an unfortunate situation, it was like a well-oiled machine. I just can’t even describe how good a team we had there that night.”

While Brandi Hurley has no knowledge of a similar accident at Laurens, and the Hurleys have taken steps to prevent future accidents from happening at the same spot on the track.

“In the 25 or 30 years that we’ve heard of anything going on (at Laurens County Speedway), nobody has actually gone over the wall like that into pit stands,” she said. “We made the repairs to the fence and we actually put in posts in front of that fence and cables so that would hopefully stop a race car if it did top that wall there from ever going over the fence, or under the fence or through the fence. ... The poles and the cables would stop the car.”