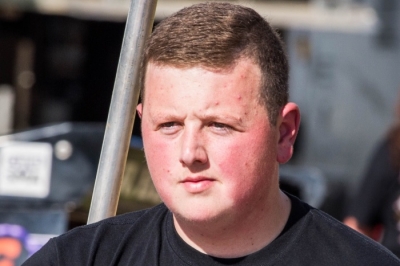 When he decided to attend Thursday’s King of the Ring 40 for DIRTcar Late Models at Tyler County Speedway in Middlebourne, W.Va., just three days after having mechanical issues during an event at 411 Motor Speedway in Seymour, Tenn., his parents, who were unable to make the trip to Tyler County, balked at the idea. They didn’t want Roberson to make the six-hour trek from Waynesboro to Middlebourne alone, especially after the youngster had stayed up to 2:30 a.m. repairing his Rocket xR1 Chassis.

So Roberson enlisted the help of a friend and off they went. It turned out to be a pretty darned good decision as Roberson turned back a challenge from Max Blair with eight laps remaining and then held on for a flag-to-flag victory worth $5,000. Afterwards, an emotional Roberson told announcer Dustin Jarrett just how thankful he was to have his parents’ support.

“Man I tell you, me and my dad’s worked our hearts out,” said Roberson, his voice cracking. “For me to get to do this, my mom and dad’s spent every dollar they got to make sure I can race with these guys. I know they’re watching back home. This is my first race that my mom and dad’s never been with me. Man, I don’t know what to say.

“I know I’ve sucked a lot in Supers and haven’t did the way I wanted to do, but man, tonight, you know, when God (makes it) your night, then it’s your night and he’s gonna do whatever he needs to do. When Max slid me, I said, man, I’m not losing. I’m gonna do whatever I gotta do … whatever I gotta pull out of my butt, I’m gonna win this race. I just want to make my mom and dad proud. That’s the only thing I want to do in life.” — Staff reports

Missourian steps up in class

Longtime Lucas Oil Speedway fans might remember Shawn Strong as a top B-mod division contender for several seasons. Yet even while winning B-mod races, Strong considered himself a Late Model driver at heart.

So it seems fitting that Strong has stepped up at the Wheatland, Mo., oval, this season to compete in the Late Model division, posting fourth- and seventh-place finishes in the first two events.

"I'm actually pretty excited, being kind of new to the Late Model game,” the Billings, Mo., driver said. "The car has an insane amount of speed. We had a battery, or something, go bad on lap four last week and kind of killed what we felt was a pretty good night for us. I felt we had a second-place car.

"So I'm really happy with the car. We've been fast and that's a good sign."

Sitting just outside a top five in points and just 22 points behind leader Kaeden Cornell, Strong looks to dial in his Late Model a bit more this week for a 25-lapper paying $1,000-to-win courtesy Hickamo Country Store. A three-time Lucas Oil Speedway feature winner in B-mods back in 2016, Strong dabbled with USRA Modifieds in 2018 and found it unsatisfying.

"I was driving for a guy and it wasn't a top-notch, newer car like a lot of the modified guys are running today," Strong said. "We were coming to Lucas quite a bit and running seventh or eighth. We got to talking and figured that's probably all the car has really got. Seventh or eighth on a weekly show doesn't really pay the bills."

"I've always been a Late Model guy," Strong said, noting his uncle Bob Aton — an Ozarks Area Racers Foundation Hall of Famer — was a custom race-car painter and Late Model driver when Strong was growing up. "Going to the races and watching him, I always wanted to drive a Late Model.

"I'm kind of getting to that point of my career where the racing days are probably numbered," Strong explained. "My (eighth-grade) daughter plays travel basketball and this and that. I don't want to miss seeing her grow up. I thought that before I'm done, I want to drive a Late Model.

"I had what I felt was a pretty solid career in the B-Mod and didn't have anything else left to prove in that. So I did the Cash Money Series deal last year, but my love has always been Lucas Oil Speedway. It seems that's where my comfort zone is. So I made the decision over the winter to get my personal car out, me and Brad Looney. He's a few days from being ready and a little bit behind me.

"We decided that we were going to run this ULMA deal. So far it looks like it's going to be a lot of fun and a good, competitive year.” — Lyndal Scranton

A wet forecast forced the cancellation of Friday’s Crate Racin’ USA Series event at Tri-County Speedway, but the series will run its $3,000-to-win event Saturday at the Pollard, Ala., oval. While Friday’s series event was removed from the card, the track will try to run a weekly program, including Crate Late Models (wristbands from Monday’s rainout will be accepted for entry). … East Tennessee dirt tracks are mourning the death of Wendell “Doc” Petty, a former racer and team owner who was also an original staff member on the second-year American Crate All-Star Series. Petty died Thursday morning of a heart attack, according to Tazewell Speedway officials. … The United Championship Racing Association added a pair of $2,000-to-win Crate Late Model events June 12-13 in Alabama. Fort Payne Motor Speedway hosts the weekend opener with Eastaboga’s Talladega Short Track the weekend finale.