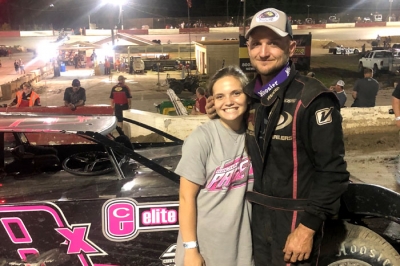 While Michael Page rolls up victories in the Dirt Late Model ranks, his teenage niece is making a name for herself with success on an even bigger stage.

Page, 37, of Douglasville, Ga., is anxiously following the rise of his niece Megan Danielle, a 17-year-old high-school senior, also from Douglasville, who is one of nine finalists on "The Voice" singing competition television series currently in its 18th season broadcast on NBC.

“Like 40,000 tried out and there’s nine left now,” said Page, one of the Southeast’s top Dirt Late Model racers. “It’s pretty cool. I’m proud of her.”

The middle daughter of Page’s sister, Danielle, who regularly attends her uncle’s Dirt Late Model events, started pursuing singing professionally at the age of 15. She auditioned unsuccessfully three times for "The Voice" and once for "American Idol" before finally getting a shot on this season’s edition of the NBC show, which is hosted by Carson Daly and features recording stars Kelly Clarkson, Blake Shelton, John Legend and Nick Jones as “coaches” who critique the contestants’ performances and guide their teams of selected artists through the remainder of the competition.

Danielle traveled to California earlier this year to compete in the show’s opening blind auditions round. With Page, Danielle’s mother and other family members looking on from the audience, she was picked by the Grammy-winning Clarkson to continue on in the competition as part of Team Kelly. The coronavirus pandemic, however, has shifted the show to a remote-broadcast model with contestants performing from their homes.

“They sent all kinds of (broadcast) equipment,” Page said. “I had to go help her the other day put up a big ‘ol green screen (to serve as a background for her performances). I don’t know what the hell I’m doing, but I helped the best I could.”

As Danielle has turned heads with her vocal abilities on camera, Page has garnered some national television time of his own. During the Feb. 24 broadcast of Danielle’s blind audition, Page was seen several times watching her performance on stage and celebrating her selection by Clarkson with other family members. He also appeared in a group of family members — with a racing hat perched on his head — on the live March 4 broadcast as Danielle awaited the announcement of the nine finalists.

“You’ll see me again when they do another results show,” Page said with a laugh.

With The Voice winding down to its final few episodes, Danielle will battle her fellow contestants in live performance rounds Monday and Tuesday at 8 p.m. EDT. Fan voting on the "The Voice" app and NBC.com will determine which artists move on — a fact that allows the Dirt Late Model world to support Danielle — and the ultimate winner of the grand prize: $100,000 and a record contract with Universal Music Group. — Kevin Kovac

After a lackluster four nights at East Bay Raceway Park during Georgia-Florida Speedweeks, Donald McIntosh has been nothing short of on point since returning home. In seven events since Speedweeks, the Dawsonville, Ga., driver has finished outside the top five just once. He has five podium finishes, including a pair of victories in his native Georgia, winning the $4,000 Ultimate Southeast-sanctioned race at North Georgia in Chatsworth on March 13 and the DirtonDirt.com Dirt Showdown at Boyd’s Speedway in Ringgold on May 2.

“We built a new car over the winter and we had some good notes from last year and it was kinda just … our nights,” McIntosh said during an April 30 visit to Tri-County Racetrack in Brasstown, N.C., where he swapped the lead with Shane Clanton before settling for second place. “Now it’s like we’re starting all over. You can throw that away. It was almost a last year thing. Because it has been so long you’re out of the groove, everybody’s out of the groove. We just have to go back with the same mindset we had.”

McIntosh said the hard work put in during the 2019 season, a year in which he rejoined Maryville, Tenn.’s Blount Motorsports after a year away from the team, has been the catalyst to this year’s fast start.

“We ended the year last year pretty good and we had pretty good notes,” he said. “Getting back comfortable (with Blount Motorsports) … last year was the first year back with the team. We’re just getting our groove back, knowing what I want to feel in the car and adjustments that I need to make. That’s big. Having that chemistry and knowing … (crew chief) Dave (Bryant) being able to watch the car and being able to make a decision on a chassis change and me driving the car and making a decision and coming to an agreement on what the best one is is a lot of it … him trusting me and me trusting him.”

“They did some different things when I was gone and I did some different things,” he said. “We both kinda went separate directions so we had to find a happy ground in the middle where we were both happy. Once we found a happy medium, we’ve worked around that and kinda gone from there. You learn something always, but it’s putting it all together in package to make it work, to make me comfortable in the car.” — Robert Holman

Atomic Speedway in Alma, Ohio, shifted its Atomic 100 weekend too July 24-25 with $6,000-to-win events. Brad McCown also announced that Chad Walters has come aboard as a co-owner of the racetrack, which plans spring renovations including resurfacing, VIP area renovation and bleacher improvements. ... A Red River Valley Racing Hall of Fame is being organized to celebrate the Fargo, N.D.-Moorhead, Minn. racing scene over the past 70 years with plans to announce the inaugural class this summer. Photographer and publicist Mike Spieker has organized a committee that includes former Red River Valley Speedway Late Model champion Mitch Johnson along with several others connected to the area's racing. ... Bullring Boosters at Tyler County Speedway in Middlebourne, W.Va., are voting for the 2020 Bullring of Honor Class. Induction ceremonies, pushed back because of coronavirus cancellations, have been rescheduled for Aug. 15. Mike Balzano, Earl Hill and Butch McGill have been inductees the past two years. ... IMCA Late Model drivers have new contingency awards for 2020. St. Clair, Mo.-based Performance Engineering & Manufacturing will provided a $250 certificate to the overall weekly champion and $150 certificates to the rest of the top five in points. Additionally, Lyons, Ohio-based Dominator Race Products will provide $100 certificates to drivers sixth-15th in final Late Model standings.