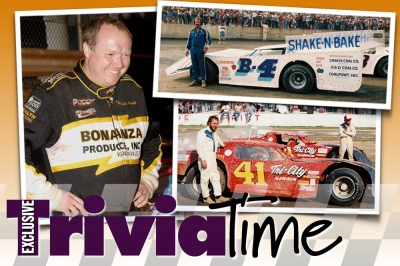 Part of a continuing feature at DirtonDirt.com, test your Dirt Late Model knowledge with a 20-question quiz from longtime racing historian Bob Markos. How many can you answer correctly? (click here for answers):

1. What have Dale McDowell, Scott Bloomquist and Jimmy Mars all accomplished that will never be repeated?

3. What do Terry English, Steve Francis, John Gill, C.J. Rayburn and Colonel Harlan Sanders all have in common?

4. Which one of these Sprint Car aces has never competed in Dirt Late Model competition?

5. Which one of these Dirt Late Model aces has never competed in sprint car competition?

6. What was the first-ever contested $50,000-to-win event in Dirt Late Model history? Where was it? Who won it?

8. What was the pseudonym used on the ovals by Southern Dirt Late Model great Gene Hampton Daves?

9. Which Dirt Late Model great went from drag racing to Dirt Late Models, first in an ex-Doug Kenimer car, while hauling coal during the day and racing weekends, and finally ended up a World 100 winner and Dirt Track World Champion?

12. Which media outlet was launched by a former TV sportscaster Sept. 4, 2007, and changed the complexion of the Dirt Late Model world?

13. Which Dirt Late Model Hall of Famer won a Jackson 100, was an American Speed Association Stock Car Rookie of the Year and also qualified for a pair of Little 500 sprint car meets in Anderson, Ind.?

14. Which Dirt Late Model Hall of Famer was known during his racing days as “the King of the Tennessee Hills”?

15. Which two-car Dirt Late Model team combined for a record 19 NDRA victories in a single season?

19. What driver won his first Dirt Late Model feature event at Brownstown, Ill., in 1992 and went on to become a Dirt Track World Champion?