Notes: Gustin ready to dive back into Late Models

From series, track and contributor reports 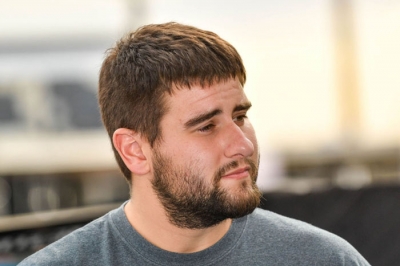 Plenty of drivers will be anxious to get back to action as the spread coronavirus limits dirt racing opportunities in the coming weeks, but Ryan Gustin might be as anxious as any.

After all, the 29-year-old Marshalltown, Iowa, driver hasn't run a complete Late Model season since 2015, and he's ready to get back to regular action in the full-fendered division.

He's got an ambitious schedule planned with most of the Lucas Oil Midwest LateModel Racing Association events on his slate along with the DIRTcar Summer Nationals, the grueling day-after-day tour through the Midwest from mid-June to mid-July.

"This is something that Dave has always wanted to do and Late Model racing is what I have always wanted to do," said Gustin, the two-time United State Modified Touring Series champion who fielded a Gressel Racing Late Model from 2013-2015. "I had already planned on mod racing the first year we got together and the second year, so we just kind of did that and our relationship grew and everything got better and better and has just continued to grow."

He's already got a victory in Steine's Late Model at last October's MLRA Fall Nationals at Lucas Oil Speedway. That Wheatland, Mo., oval, was originally scheduled to open MLRA's season — with Gustin among the entrants — but the pandemic forced the cancellation of the April 10-11 weekend.

Gustin has eight career victories in MLRA competition — the last one coming in 2015 before October's victory — and he'll be looking for his first success in Summer Nationals action.

"It's every dirt racer's dream to either race Dirt Late Model or sprint cars, and for me it's Dirt Late Models. It's the top tier that every driver wants to be in," Gustin said.

It's always been a national step up from his expansive modified success.

"The modified is kind of a steppingstone to get to that level," he said. "A lot of things on the modified and the Late Model are the same as far as rear suspension goes, so it helps you to already know about that part of the car."

Gustin's Late Model season actually began in January during the six-race Keyser Manufacturing Wild West Shootout at FK Rod Ends Arizona Speedway, but he struggled to find his way to the front. His best finish was 10th and he was 16th in week-long points among 51 entrants overall.

He'll also be adjusting to a new style tire when competing with the MLRA tour.

"Everybody is going to have a little bit of learning to do but hopefully it will be better for everyone — the racing, the tires, just everything," Gustin said. "I think the new tire rules are going to speed everybody up. With the hard tire your always just slipping and you can't really get a hold of a whole lot, which definitely does put more driver into it in my opinion. But at the same time, sometimes the racing is not always as good because you have those four or five drivers that are just that much better than everybody else and they can tend to run off from the rest."

He'll hope to be among those top MLRA competitors.

"MLRA has a good group of guys, and the guys that run up front and win those races seem to be able to run pretty well with the touring guys when they come to their area," Gustin said. "If you can get your stuff good enough to go win one of the (MLRA) races, you're setting yourself up pretty good to run decent on the national level." — Billy Rock

NORTH FLORIDA'S 2021 WINTER PLANS: North Florida Speedway in Lake City, Fla., officially announced that Super Late Models won't be part of its Georgia-Florida Speedweeks action in 2021. The track has scheduled a DIRTcar-sanctioned Super Late Model event each season starting in 2013 but has averaged fewer than 20 cars per event. North Florida plans racing action Jan. 28-30 and Feb. 4-7 next winter with no Late Model divisions part of the action.

IMCA BACK AT SHELBY COUNTY: IMCA-sanctioned Late Models return to Shelby County Speedway in Harlan, Iowa, in 2020 with plans to headline the season-opening Cabin Fever Breakout special April 17-18, IMCA's Bill Martin announced. Track points will be awarded on 13 race dates scheduled for the division during the weekly points season, beginning May 2 and including the May 30 James Buwalda Memorial show. IMCA Late Models last ran at the 4/10-mile oval in 2016. Season championship night is set for Aug. 22. The 28th annual Tiny Lund Memorial is Sept. 25-26.

ATTICA LIVE WEEKLY: DIRTVision and Attica (Ohio) Raceway Park announced a broadcast partnership establishing DIRTVision as the exclusive broadcast platform for Attica's full regular-season schedule of events headlined by the Attica-Fremont Championship Series for 410 sprint cars and DIRTcar-sanctioned Late Models. “The investments that John Bores and our local community have made at Attica Raceway Park have put us in a position to be able to showcase our facility, track and partners on a big stage,” said Rex LeJeune, director of race operations at Attica. “I think all of us at the track follow DIRTVision, and we consider it an honor to have our regular season featured on the network.” Attica also announced plans to use combined hot laps-time trials at select 2020 events.

ODDS AND ENDS: Ohio Valley Speedway in Washington, Va., has been added to the Fastrak Racing Series schedule with an Aug. 7 event. ... I-77 Speedway Park in Ripley, W.Va., announced plans to run Saturday nights in 2020 after previously operating primarily on Fridays. ... Bill Stivason, who served as an assistant scorer at Lernerville Speedway, died March 11 after a battle with cancer. He was 83. ... Chris Upton, a longtime turn-two steward at Tazewell (Tenn.) Speedway, died from injuries sustained in a March 14 traffic accident. He was 46. ... Former racer Gene Dupuy of Watkins Glen, N.Y., a longtime supporter and employee of Outlaw Speedway in Dundee, N.Y., died March 12. He was 68. ... Viking Speedway in Alexandria, Minn., is running a weekly Limited Late Model division in 2020 with a single WISSOTA-sanctioned Late Model event on June 20. ... Kevin Marsh of Tunnelton, W.Va., who competed in several divisions at Elkins Speedway in Kerens, W.Va., including Late Models, died on March 12. He was 60.