From track, series and other reports 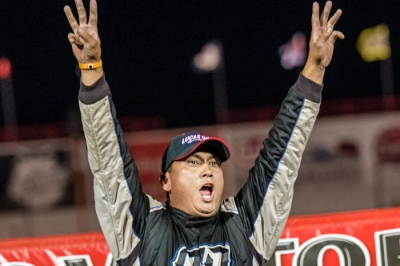 "It takes a lot of stress off you, if you look at it that way. Just go try and win races. That's how I approach it."

And one thing is certain: If Fennewald is in the hunt nearing the finish, he's proven tough to beat when the stakes are high on the Lucas Oil Speedway dirt.

The Appleton City, Mo., driver's first track title in 2017 saw Fennewald needing to finish ahead of Aaron Marrant on the final night of the season. A second-place finish was good enough as it was one spot in front of Marrant.

The last two years, those two and Kaeden Cornell were separated by just five points entering the points finale. In 2018 and 2019, Fennewald rose to the occasion and won the title-deciding feature, making a doubly sweet trip to victory lane.

Clearly, Fennewald enjoys the pressure. Even though he feels it's not pressure at all.

"It's fun. I love the challenge," Fennewald said, adding that a tight points race clearly defines what needs to be done. "You know what you have to do. If you're going to win the points, you have to win the race, basically. It's simple."

The season-ending drama almost wasn't poised to go Fennewald's way after a four-week, self-proclaimed slump preceded the final night. It included a third-place finish, two fourths and an uncharacteristic seventh.

"It was my own fault," he said. "Running a construction business and driving for UPS — and trying to keep up with everything (on the car) myself — it's a lot of work. If you don't check everything, you might miss something.”

Fennewald said his lift-arm shock was off and he didn't realize it for those few weeks.

"I knew right when I found it that the car would be pretty good, and we went back to winning again," he said. "Just in time."

Fennewald expects more of the same top-caliber — if not tougher — competition this season with some new names expected to join the fray in ULMA races at several tracks. In addition to Lucas Oil Speedway events, including two October races, there are three ULMA races at Monett (Mo.) Speedway and two scheduled at Grain Valley Speedway in Valley, Mo.

"You never know," Fennewald said of his 2020 rivals. "I've heard some names pop up and I'm loving it. I want us to have 40 cars a night. I don't care who shows up. I like competition. It makes you a lot better.

"We've been pretty busy this winter,” said Fennewald, whose first competition at Lucas Oil Speedway is scheduled for April 4. "I work on the car every night. Late nights and long days. Get up early and stay up late. That's how it works.” — Lyndal Scranton

DIRT ON ASPHALT IN LOUISIANA: The 3/8-mile asphalt oval at Revolution Park Racing and Entertainment Complex in Monroe, La., will be covered with 1,500 tons of dirt for Sept. 17-19’s Dirt on the Rev event that includes Super and Crate Late Model divisions. Details haven't been announced by race director Nick Brown for the event that's presented by country music star and Louisiana native Dylan Scott, an avid dirt racing fan.

WISSOTA CHALLENGE TITLE SPONSOR: Structural Buildings of Becker, Minn., is the title sponsor for the 21st season of the WISSOTA Late Model Challenge Series. “Structural Buildings will be a great addition to WISSOTA and specifically our premier series,” said WISSOTA's executive director, Carson Gramm. “The Stewart family and the whole team at Structural are 100 percent supporters of WISSOTA and local dirt track racing." Founder Chad Stewart and family members have raced for more than 20 years at tracks including those on the WCS schedule. "With our love for dirt track racing and our passion for motorsports, this makes us extremely proud and honored to join the WISSOTA team to help support the racing community," Stewart said. The tour's season opens May 22 at Princeton (Minn.) Speedway. A.J. Diemel of Elk Mound, Wis., is the reigning champion.

ODDS AND ENDS: Hoker Trucking has been named title sponsor of what was previously the Deery Brothers Summer Series. Series promoter Joe Kosiski, who also operates the Malvern Bank Series, acquired the IMCA tour in December. ... The Ultimate Northeast Super Late Model Series announced it will pay the top 10 in series points in 2020 after the top five were awarded in 2019. The series champion receives $5,000 with $2,500 for second, $1,200 for third, $800 for fourth and $500 to drivers 5-10. ... Rice Lake (Wis.) Speedway plans four Late Model events in 2020. Besides Structural Buildings WISSOTA Challenge Series events on May 23 and Aug. 1, the third annual Trackside Collectibles 40 pays $2,000-to-win on May 9 and Late Models will chase a $1,000 winner's purse June 20. ... The American Crate All-Star Series announced a points fund increase for 2020 with $7,500 going to the champion with $4,500 for second and $3,250 for third. The points fund on the second-year tour presented by PPM Racing Products pays by 10 places. ... Sam Hines of McHenry, Ky., who built his hometown Central Park Raceway (1987) and Cedar Ridge Speedway (1989) in Morgantown, Ky., died Feb. 24, according to a Facebook post by the Morgantown track. ... Georgetown (Del.) Speedway's season-opening weekend, the Melvin L. Joseph Memorial, includes a $1,049-to-win for RUSH-sanctioned Crate Late Models on March 8.