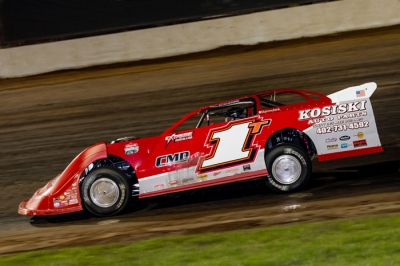 One of the breakthrough drivers of the 2019 season at Lucas Oil Speedway looks to make even a bigger splash in the upcoming year at the Wheatland, Mo., oval.

"It would be really cool to run for a championship," Cox said. "The plan is to be there every night and run all the scheduled ULMA races as well. That's the goal. Show up every week and be the best we can and try to win some races. If we do that, the points should take care of themselves."

Cox figures to have a couple of things going for him as the new season begins. He returns in an MB Customs race car that he debuted late last season. He figures that upgraded ride, along with additional on-track experience, will be a formula for his continued growth in the driver's seat.

After driving an older Victory Circle, Cox bought the MB Custom car from the well-respected Kosiski family in Omaha, Neb. He said Andrew Kosiski was key in helping him get the correct setup.

"I had to change my driving style a little bit," Cox said. "You can drive it a lot harder. It fits me a little bit better, I think.

"Overall, the (2019) season was OK. We started off a little slow, then got a lot better towards the middle and the end of the year. I just got a lot more comfortable in the heat races and we were able to start up front in the features.

"We missed one or two nights and that hurt us. Still, we almost finished top-five in points and I was pretty proud of that."

Cox said he found that being aggressive in the heats is vital for any chance of contending in features — especially with the likes of three-time reigning track champion Johnny Fennewald, along with ULMA champion Aaron Marrant and young gun Kaeden Cornell the trio to beat.

"It's a lot easier to pass a few cars in the heat race and start up front in the feature than to get by them all in the feature," Cox said. "Competition is so tough at Lucas, you really need to start in the front two rows of the feature to have a chance at winning. You can win from further back, but it's a lot tougher. Everybody is fast.

"You just have to be confident and really work hard on our stuff. Those guys (Fennewald, Marrant and Cornell) are working right now to get faster and so are we. They aren't just sitting at home. We're working to get faster and align myself with some more people to help me out."

Cox, the son of former Late Model driver Chris Cox, will be busy in the upcoming weeks. Along with getting the race car ready, he's working toward his degree at State Technical College in Linn, Mo., where he's studying for an HVAC degree.

"I also want to thank my parents, Troy Williams and John Martin for all they do," Cox said.

The Lucas Oil Speedway season kicks off with the open test and tune on March 28 with the first night of action on April 4. Visit lucasoilspeedway.com for more track information.