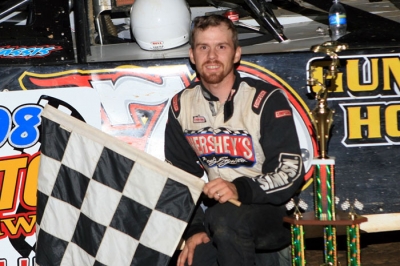 Coleby Frye and Dickson started on the front row with Dickson taking command early over Frye, Bo Feathers of Winchester, Va., Andy Anderson of Martinsburg, W.Va., and Jack Pencil of Bedford, Pa. Feathers moved into second on the 14th lap and began to reel in Dickson while Myers and 23rd-starting Alex Ferree of Saxonburg, Pa., were working toward the front. The frontrunners entered lapped traffic on lap 18 and things tightened up before a lap-20 caution bunched the field. Feathers had to pit with a flat tire, moving Myers into second for the restart.

Dickson restart up front, but Myers moved to the outside groove and took the lead on the 22nd lap. Myers was ahead at the halfway mark over Dickson, Frye, Mike Altobelli Jr. and Anderson. Altobelli took third from Frye on the 30th lap and a caution eight laps later for a slowing Jared Miley reset the field for the final 12 laps. Myers stayed in charge the rest of the way for the victory while Altobelli dropped off the pace with two laps remaining. Dickson crossed the finish line second ahead of Pencil, Ferree and Frye.