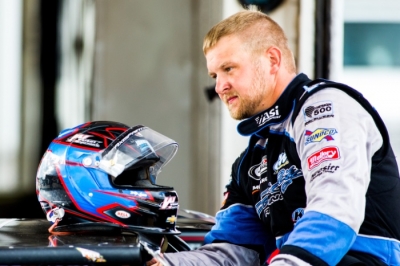 Will Vaught is among Missouri's top dirt racers. (heathlawsonphotos.com)

Will Vaught's dream of winning his biggest home-state race nearly turned into a nightmare. Major engine issues left Vaught wondering if he would even make the 90-minute haul to Lucas Oil Speedway.

But thanks to some last-minute sponsors who stepped forward, the Crane, Mo., driver will be on hand with plans on being a contender when the 27th annual Show-Me 100 presented by ProtecttheHarvest.com fires up Thursday at Lucas Oil Speedway in Wheatland, Mo.

"We had some guys step forward and help us out on this deal," Vaught said after a broken crankshaft claimed his best motor May 5 in Lucas Oil Midwest LateModel Racing Association competition at Quincy, Ill. "It's a big deal and it means a lot to me to be able to race. Last week, we were still trying to come up with funds and it didn't look good.”

The crown jewel for the Lucas Oil Late Model Dirt Series and sister MLRA tour will have full programs Thursday, Friday and Saturday nights for both the Late Models and modifieds.

Action kicks off on Thursday with the Cowboy Classic headlining the program, with a $6,000-to-win, $600-to-start main event for the Late Models which also enables drivers to earn valuable points toward starting position into the final-night main event. The Tribute to Don and Billie Gibson on Friday also will see a $6,000-to-win feature with more points earned for the starting lineup the next night.

Vaught recalls as an elementary-school-aged youngster making the two-and-a-half-hour drive to watch the Show-Me 100 when it was held at West Plains (Mo.) Motor Speedway, where the Gibsons founded the race.

"I was so little, I don't really remember much," Vaught said. "The first year I really remember is when I raced in it, which was probably 2004. I was still in high school. I know I had a lot of fun.”

This even though Vaught didn't come close to qualifying for one of the sport’s biggest events, with his underfunded and underpowered spec motor, surrounded by dirt racing's best of the best.

Vaught has qualified for multiple Show-Me 100 features since those high school days. He's qualified toward the front a couple of times, though never been a serious contender at the finish. But this could be the year that the 32-year-old is a serious player and that would be special.

The stat that stands out to anyone from Missouri is glaring. Terry Phillips, in 1999, is the lone Missouri driver to ever win the Show-Me 100.

"It's been a long time since a Missouri boy won this deal," Vaught said. "I think we all — not just me — but all of us from Missouri take pride in getting ready for this race and wanting to run good and represent our area.

"I know for the kind of schedule we have any more, it's one of the bigger races of the year. We put a lot of effort and time and preparation into this race."

You might even say that Vaught has come full circle. While he began going to the Show-Me 100 with his family in the early days of the race, now his own family is in tow. He and wife Ashtin have three youngsters: son Maddox (9), daughter Mallory (8) and son Miles (16 months).

Before starting his own family, Vaught was a gung-ho, aspiring race-car driver who wanted to race for a living. But these days, he's content with being a part-time racer, family man and businessman with his Circle V Auto Sales and Johnson's Service Center to run in his hometown.

Even though he's racing a lot less, he's winning more than ever. Last season, Vaught won five of the final eight Lucas Oil MLRA races and nearly pulled off the series championship in the process, finishing just behind Chad Simpson. He was quick out of the gates in 2019, winning an April 27 MLRA feature at Caney Valley Speedway in Caney, Kan., and leading the tour’s points early.

But as the motor problems threatened to derail things, Vaught was able to stay calm, focused and now is ready to stay on track.

"My maturity level, I've learned a lot over the years to get better," Vaught said. "I have to work during the day. I have a good crew guy in Eric Barnes and he does so much at the shop to get us ready for the weekends. If it wasn't for him, I couldn't race."

Vaught said he and Barnes have been friends since about 2003 with Barnes turning wrenches on his race cars for the last eight years. The two are friends who mesh well both at the track and away from it with.

"I wish we could make a living by racing, but that isn't the case." Vaught said. "If it wasn't for our shop, we wouldn't be able to pay the bills. We work all week to support our family and pay the bills, then we go out and get to play on the weekends."

Vaught said it would be sweetest of all to celebrate his Memorial Day weekend at a race that he once watched from afar, so many years ago.

"This race has always beat me up," Vaught said. "We've ran so good at the Diamond Nationals several times (he was fourth in the Lucas Oil Late Model Dirt Series event in 2018). We've qualified well at the Show-Me but had problems in the feature several times. I don't even know my best finish. Maybe this will be the year we'll remember how we finish."

"My maturity level, I've learned a lot over the years to get better. I have to work during the day. I have a good crew guy in Eric Barnes and he does so much at the shop to get us ready for the weekends. If it wasn't for him, I couldn't race."