Missouri newcomer gets up to speed quickly 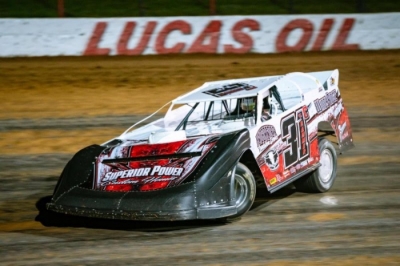 With only a handful of Late Model attempts under his belt, Cole Henson admits it's an ongoing education each time he climbs behind the wheel of his No. 31.

"They set me up with a great car every week," Henson said of car owner Rob Schlup and veteran racer Tony Jackson Jr., who offers advice on the Longhorn Chassis that Henson drives in the Warsaw Auto Marine & RV-sponsored ULMA Late Model division at Lucas Oil Speedway in Wheatland, Mo.

"It's a matter of me getting more seat time and learning more about these Late Models," Henson said. "Seat time is a big key for me right now."

Henson, 23, is proving a quick study in his first full season in the division. He already has three top-five feature finishes in three starts at Lucas Oil Speedway in 2019, plus a feature victory at Lake Ozark Speedway.

"It's been going really well for us, so far. Hopefully we'll keep it up,” said the Russellville, Mo., driver, who is part of a racing family. His older brother Derek races street stocks and their dad, Stanley Henson Jr. raced until about 2006 after his father drove on central Missouri ovals many years ago.

"Mom and Dad started me and my brother out in four-wheelers when we were really young, then we moved up to go-karts for a while," Cole Henson said. "My Dad quit racing in about 2006 and he passed it on to my brother. It then got passed on to me and I started in street stocks for four years, then teamed up with Rob Schlup, Jeff Schlup and Jason Porter.

"They helped me get involved in Late Models at Capital Speedway. Moving up to them, driving style is a big thing. You drive them so different and there's so much on these Late Models to learn with set-ups. At the track and the shop, I really pay attention and try to learn as much as I can.”

Henson made a few starts last season at Lucas Oil Speedway, but a hard wreck knocked him out of action. He returned with the Longhorn this season, a car formerly owned by Jackson who continues to offer helpful helpful advice.

"Tony and Rob talk a lot and Tony helps me with driving, tells me how to drive it," Henson said. "He and Rob talk setups and how to get the car better every week."

Henson said he's looking to continue his string of top-five finishes at Lucas Oil Speedway, knowing that if he keeps running near the front he eventually is going to break through and get a win. The division has been dominated by two-time defending champion Johnny Fennewald, Aaron Marrant and Kaeden Cornell the last few years.

"Those guys are super fast," Henson said. "I jumped out to the lead two weeks ago at Lucas, running the low side and thought we had a great car. Kaeden got me on the top side and then on a restart, Fennewald got me and we settled for third.

"The best thing I can do is follow those guys and learn from them. They've been driving Late Models longer than I have. I can learn a lot from them by just following them."

"And Tony (Jackson) is not a sponsor, but he does help us with TJR Motorsports," Henson said. "Plus my parents and grandparents help us a ton, too. They are there every week and our biggest supporters."