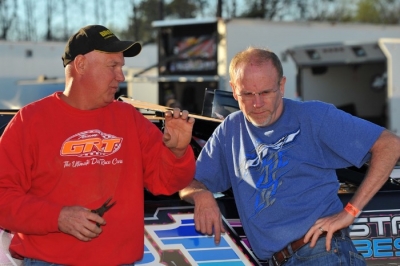 “When GRT first started, it was just like a job shop,” said Sullivan, who would later pilot the GRT house car. “They had the goal of building race cars, but they would do anything. They painted school buses, worked on people’s race cars — street stocks, it didn’t matter. Anything to make a living.

“Then Late Models finally started picking up, and, at one time, we looked up and we were building seven a week. It was just all we could do to keep up.”

By the late 1990s, Garrison and GRT were on top of the Dirt Late Model chassis manufacturing game, selling more than 300 cars a year, providing top-notch equipment, recruiting the sport’s top drivers to join Team GRT and providing a blueprint for other modern-era chassis builders.

Garrison, who died Wednesday at age 60 after a battle with cancer, was remembered by those in the industry for setting standards that helped GRT dominate the national touring Hav-A-Tampa Dirt Racing Series and dirt racing throughout much of the South.

Terry Phillips of Springfield, Mo., one of the longest-running GRT drivers as well as a dealer of GRT Late Models and modifieds, remembers the pride Garrison took in manufacturing his early race cars.

“He kind of stepped up the whole racing program as far as fabricating a car,” said Phillips, who raced to 10 championships in MARS and MLRA competition, mostly driving GRTs. “He was just a step above everybody on fabrication and a good strong car. When he come out with his Late Models and started building them, they were just a lot nicer than everybody’s. He worked on them a long time.

“He wasn’t a driver himself, so he took the mechanic aspect of it. He’s one of the first guys you could get a three-quarter wrench and a 15/16ths and tighten damn near every bolt on the car. Everybody else had big stuff. He just kind of simplified things and made it clean. He always had a nice-looking piece and worked hard to make them fast.”

Garrison not only built swift race cars, but he connected with top-shelf drivers like longtime friend Wendell Wallace, Dale McDowell, Freddy Smith, Bill Frye, Skip Arp, Ray Cook and more to field his machines on the country’s strongest tours and in the biggest races. Team GRT soon added other standout drivers along with regional and local racers, providing Garrison the feedback to make cars even faster.

“Probably the biggest thing I see about Joe is that he was the first one to really get the team deal to work, Team GRT,” said Cook, the Brasstown, N.C., driver who won the 2000 Show-Me 100 in a GRT. “I look at the pictures on my wall and all of the cars have got that decal on them. Joe was the first one to get the team aspect going with all his drivers working together.

“I remember one time we finished a Hav-A-Tampa race at Rome (Ga.) and eight of the top 10 were GRTs. Joe really was the first chassis builder I feel like to really pull that team aspect off. Nowadays I think (Rocket Chassis co-founder) Mark Richards and what he’s done to get it to the next level … you see that with Rocket and even Longhorn (Chassis) to some extent, but it seems like Rocket’s the most now. But I just think Joe’s the first one to set the standard for that.”

“Everybody in that organization was on the top of their game,” said Wallace, who went to the races with Garrison as a boy, dreaming about a racing career. “Joe was working extremely hard. And not only him, but he had a lot of good race car drivers in his cars and that just helps out with all the feedback. It seemed like everything was clicking in those years.

McDowell, whose 1999 Hav-A-Tampa championship — and $52,000 Hav-A-Tampa Shootout victory that season — came behind the wheel of a Monday Motorsports GRT, saw Garrison as the architect of something special.

“The program that he put together was obviously awesome. At one time he had pretty much the market covered with GRT cars and he had a great group of drivers,” McDowell said. “I think the first time we had a GRT car was ’96 and we ran GRT stuff from ’96 to about ’02. We had some success and won some races and he was a pleasure to work with and just an all around great guy to work with.

“He worked hard. He worked with everybody, a lot like the manufacturers do today. He just worked with a group of drivers. The core group of drivers that he had there were on top of their game at the time and were able to feed him back information. He was able to gather all that in and just keep building a better product. He worked hard and got out there on the road and was at the racetracks traveling and was really just a very innovative guy. Anything that you’d come up with that you’d want to try, he was all in as far as supporting you or giving his time and effort toward helping you out.”

“I can remember thinking that we’ll never get to that point where Joe got to,” Richards said. “Joe had six, eight, 10 of the top cars everywhere you went. He had McDowell and he had Wendell and Frye. There was a whole host of guys that ran them cars that won the majority of the races back in those days, the Hav-A-Tampa days.

“Joe, he built a really nice car. We actually kind of learned from what Joe did about what you had to do. Joe was one of the guys that provided a quality car, turnkey, to the customer. I won’t say it formed the road for us, but we kind of got ideas from it … that you had to deliver a quality piece.”

And Richards remembers Garrison’s role with Arp’s No. 31 car in 1998 when they put the left-rear shock behind the axle tube, a development that — when everyone else caught on — sent shockwaves through pit areas nationwide.

“That changed the way Late Models race,” Richards said. “Probably that alone was one of the biggest revolutions in the sport that’s happened since Dirt Late Model racing started.”

Jason Fitzgerald of Middleburg, Fla., worked with Garrison later in his career, driving the “Southern house car” in 2015-’16 when GRT was finding more success in modifieds than Late Models. But Fitzgerald knew he was working with one of the sport’s legendary figures.

“He was very, very smart, could build anything,” said Fitzgerald, a former crew chief for Earl Pearson Jr. who operates the Fitz Factory Inc. speed shop that now is a dealer for Longhorn Race Cars. “Obviously he’s one of the ones to get dirt racing where it’s at. You can’t take not one single thing from that guy. People like him and (fellow Hall of Fame chassis manufacturers) Barry (Wright) and (C.J) Rayburn and all them guys, if it wasn’t for those guys, we wouldn’t be doing half the stuff we’re doing.

“(Nearly) every good driver in the country has been in one of his cars at one point in time and won championships and tons of races. He helped get it where it’s at. I hate it that he’s gone, I really do.”

— Ray Cook of Brasstown, N.C., on the late Joe Garrison