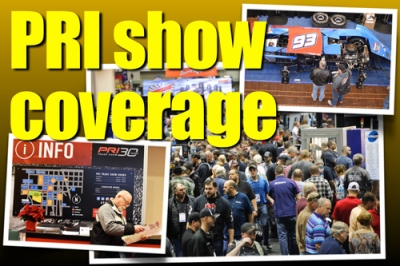 What is the PRI Trade Show? It’s among the world’s largest gatherings for the motorsports industry with exhibitors, buyers and decision-makers from all over the world displaying and viewing the latest technologies and ideas.

Where is it held? The Indiana Convention Center in Indianapolis, Ind., just north of Lucas Oil Stadium and just southwest of the city center.

Who attends? Because it’s for trade only, attendees must manage or represent a racing business or professional race team. Casual fans aren’t admitted. There’s no charge for attending buyers, but there’s a $500 fee for non-exhibiting manufacturers or service providers. Also, children under 16 aren’t allowed except for licensed racers.

Where does everyone stay? Most showgoers tend to stay in adjacent hotels that allow entry into the convention center without even going outside. Others stay in other downtown hotels or lodge further out the suburbs. Some Midwestern teams and drivers, of course, might make a one-day trip into Indy.

How to vendors and exhibitors use the show? Most trumpet new products or evolving technologies, trying to catch the eye of racers and teams.

How do racers use the show? Along with looking at new products, many of them use the trade show to thank existing sponsors and supporter they may not see much during the season. Others try to network and seek out new sponsors.

How do you recognize folks? Everyone wears badges listing their names and affiliation. But beware, some folks might’ve failed to register and could be wearing a borrowed badge.

What are some strategies for touring the show floor? Some folks circle booths they plan to visit on the trade-show floor map, while others go high-tech and map out plans using the PRI show app on their mobile devices. Others wander aimlessly and some try to see the entire show aisle-by-aisle.

Where does the Dirt Late Model crowd gather? Popular gathering spots are the World Racing Group’s World of Outlaws and DIRTcar exhibits, the Lucas Oil Series exhibit, the Hoosier Tire exhibit and the Keyser Manufacturing/Integra booths. But you can find familiar faces at many booths that cater to the Dirt Late Model industry.

What happens after hours? Plenty of dinner plans are made at the trade show with showgoers flooding nearby restaurants and bars throughout the weekend. The Lucas Oil Late Model Dirt Series also has its banquet scheduled for Friday at the Lucas Oil Stadium.

What schedules are expected? Among Dirt Late Model schedules expected to be released are from the DIRTcar Summer Nationals, the Schaeffer Oil-sponsored Ray Cook tours and the Schaeffer’s Iron-Man Series.