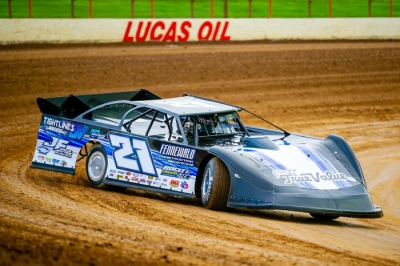 Late Model ace Johnny Fennewald says it's too early to tell if he will make a run at a third straight Lucas Oil Speedway track championship in 2019.

But if the Appleton City, Mo., racer does chase a threepeat in Wheatland, Mo., odds are things will go right down to the final night of the season. Maybe even down to the last lap — just like it has the last two years on the division sanctioned by Lucas Cattle Co. United Late Model Association.

That won't bother Fennewald a bit. He enjoys a win-or-bust scenario, such as championship night in 2018 when he emerged from a three-way points battle by winning the feature and edging Aaron Marrant and Kaeden Cornell for his second straight title.

Fennewald began the action two points behind 2016 champion Marrant and two ahead of Cornell. Fennewald started from the pole and set a blistering pace with Cornell chasing him from outside the front row.

Marrant started fifth and moved into third by lap three. The trio broke away from the field and spent the final half of the race weaving in and out of lapped traffic.

It was a near-identical scenario as 2017 when Fennewald finished second in the final-night feature, one position ahead of Marrant to edge out his rival.

"It was a lot of fun," Fennewald said of the pressure-charged situations the last two seasons. "The way I look at it, you win the race and you win the points. Usually, if you just plan on winning races, it'll all take care of itself. It was like that in 2017, too.

"For sure it's a lot of fun when you have some good, quality cars you can race against like we did."

After an opening-night hiccup in 2018, when Fennewald failed to finish the feature, he made a quick adjustment to a new Rocket Chassis. He came back to win in week two, the first of five main-event wins in 11 Lucas Oil Speedway features.

"We try to get fast every week and try to do something new all the time, just to get better," Fennewald said. "I'm kind of getting back to where I was before I took a couple of years off there and didn't race."

Faced with a busy work schedule and a growing family, Fennewald stepped away from racing for a couple of years before returning in mid-2016. While he's split time between the Late Model and modified over the years, most of his focus last season was on the Late Model.

"When we backed out from racing for a couple of seasons, we just got busy and didn't have time to do it," Fennewald said. "We're still too busy to do it ... but we just like to do it any way."

Basically a one-man band when it comes to preparing the race car, Fennewald gets race-night help in the pits from his four children, including three teenagers. Sponsors include Tightline Whiskers UV, Fennewald Construction and Powell's True Value.

What's ahead in 2019? Fennewald said he's not ready to commit to another points run.

"It's kind of wait and see until all the rules come out,” Fennewald said, “then we'll see what everything looks like and go off that."