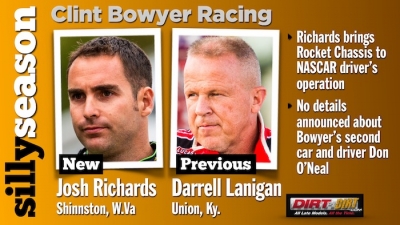 A roundup of off-season news among drivers switching teams and other 2019 planned changes among tracks, series and promoters:

Blount Motorsports: The Larry Garner-owned team based in Maryville, Tenn., revealed during the PRI Trade Show in Indianapolis that Donald McIntosh of Dawsonville, Ga., is returning as the operation's full-time driver after a one-year hiatus. Casey Roberts of Toccoa, Ga., who filled the team's seat for 2018 after McIntosh ended his three-year run with Blount, was dismissed after a two-victory season.

Club 29 Racing: Darrell Lanigan of Union, Ky., after splitting with Bowyer, plans to revive his own team with Club 29 Race Cars going it alone.

K&L Rumley Enterprises: The North Carolina-based team revives after two dormant seasons with Mike Marlar of Winfield, Tenn., behind the wheel. Jonathan Davenport was the team’s previous driver (through 2016).

Rum Runner Racing: The Joey Coulter family-owned team in Concord, N.C., hires Brandon Overton of Evans, Ga., the field the No. 2; Coulter will compete on a part-time basis.

Stone-Weaver Racing: The Crossville, Tenn.-based team of Chip Stone and Randy Weaver chooses Tanner English of Benton, Ky., to field the team’s No. 116 cars. The team split with Brandon Overton at mid-season.

Grandview Speedway: The Bechtelsville, Pa., oval announced in December it was dropping its Late Model division in 2019.

Ultimate Heart of America Series: The Battle of the Bluegrass tour is renamed and branches out to neighboring states.