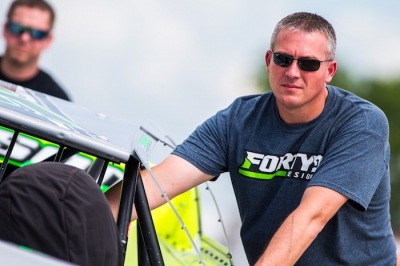 There's an old football adage that the only thing a prevent defense really prevents is victory. Many suggest that a play-it-safe approach also applies to racing, when it comes to protecting a late-season points lead.

The scenarios for Simpson to win his second MLRA championship are many and can be confusing, depending on how Vaught finishes each night. Simpson doesn't even want to bother with it, preferring to take his normal approach.

After all, the easiest-to-understand scenario of all when leading a points chase? Win and you're in.

"A guy has to go out and do his normal deal," Simpson said. "If you get caught up in that points deal and watching it all the time, that's when things tend to slip out of your hands a little bit.

"So we're going down there with the mindset that we're gonna try to win heat races and win features and go from there."

The fifth annual MLRA Fall Nationals runs in conjunction with the inaugural B-mod Clash of Champions. Both divisions have an open practice Thursday, with the Late Models set for a $3,000-to-win program on Friday. Saturday’s show will pay $5,000 to the winner — along with crowning the season champ.

It's already been quite a season for the 39-year-old Simpson, with two MLRA feature wins and 10 other top-five finishes in the series. Making it extra special is the way the team has performed in the final go with car owners Bud and Denise Brinkman of Marion, Iowa, who are retiring.

The 15-year run between Simpson and the Brinkmans is an eternity by the sport's usual standards and it's been a good one. Simpson has more than 60 feature wins and 11 regional tour points titles during the partnership, including the 2014 MLRA championship.

"Ultimately, our goal has been to finish the season out strong for them and for us," Simpson said. "Just to cap off the season with a championship, that would be kind of the highlight of everything.

"We've tried to run the operation very professionally. We like to have things done the same way. It's just been a great relationship. Everything we've done, we're of the same mentality that we're not going to go to the track unless we're completely ready. Preparation and all of that stuff, it's all kind of been on the same path and that has kind of kept us going in the right direction."

That meticulous attention to detail has been on display over the last couple of weeks, with Simpson going over his car with fine-tooth comb in preparation for the MLRA finale. But regardless of what happens this weekend, 2018 has been one of the best seasons Simpson and Brinkman have had. Included is a $10,000 World of Outlaws Craftsman Late Model Series victory and two podium finishes in Lucas Oil Late Model Dirt Series events.

"We were sitting back and thinking about that the other day," Simpson said. "We probably haven't won the most races we ever have in a season, but we've won some pretty highlighted races and we've run very consistent wherever we've gone. All in all, this is one of the better years we've had."

Simpson said he hopes to continue racing Late Models in 2019, but nothing is finalized as of yet.

"I'm trying to put some things together and see if we can keep doing this. I love the sport," Simpson said. "I probably have as much fun working on the cars as I do driving them. I'm definitely searching and looking  and hopefully will talk to some people and get something put together."