Evaluate your World 100 IQ with this tricky quiz 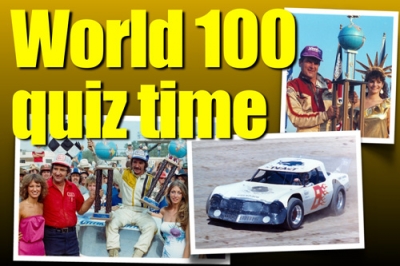 3. Three Daytona 500 winners have attempted to make World 100 fields. Two succeeded, the other failed. Who were they?

4. Which Dirt Late Model Hall of Famer was once disqualified following a World 100 heat race victory for using a direct drive instead of a required transmission?

5. In his only World 100 appearance, which former winner nearly had his hopes of victory dashed by a flapping hood, which flew off before he was black-flagged?

8. Name these World 100 champions by the sponsors on their winning cars.

9. What former NASCAR Camping World truck star had a solid finish in an early World 100?

10. Name the two Southern Dirt Late Model greats who had second- and first-place finishes in their first two starts in the World 100.

11. Who conquered the World while piloting a Jack Bowsher-built stock car legal for NASCAR or ARCA competition?

12. Which three father and son teams both qualified for the same World 100s?

14. What foursome have driven cars using the numeral 1 (No. 1) to the victory stage?

15. Which chassis builder has won the most globe trophies?

16. How many former UMP/DIRTcar weekly champions have won the World 100?

17. Which rival race promoter hired airplanes to fly over the World 100 to advertise an upcoming Dirt Late Model race?

18. How many winners were delivered to victory lane in a Jig-A-Lo chassis? Who were the drivers?

20. I won the Renegade-STARS championship, the Florida Southeastern Winter Nationals title, the Pennsylvania Summer Sizzler Series, the Buckeye Nationals and the World 100 all in one year. Who am I?

Correction: Fixes No. 12 to ask which three sted which two.