From staff, series and contributor reports 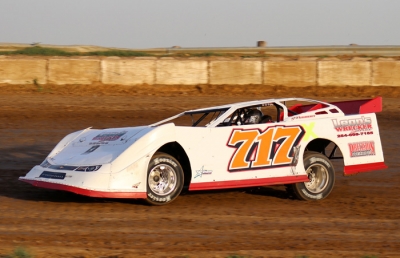 Plenty of racers assist competitors by loaning spare parts, passing along setup advice or even helping change a flat tire in the pits. But two-time and reigning Southern Texas Late Model Series champion G.W. Egbert IV of Belton, Texas, went above and beyond recently for one of his fellow series drivers.

Brandon Brzozowski, Egbert’s points rival whose 2015 Southern Texas title preceded Egbert’s two crowns, found a problem with his car’s powerplant before the series season began last month. Forced to send the piece back to his engine builder for examination, Brzozowski was ready to sit on the sidelines until he got an offer he couldn’t refuse from Egbert — the opportunity to drive the champ’s backup car.

While the tour’s season opener at Cotton Bowl Speedway was washed out, Brzozowski ended up fielding Egbert’s car in an unsanctioned event that most series regulars participated in at 281 Speedway in Stephenville, Texas, finishing fourth in a race Egbert won.

Egbert, a veteran of nearly 50 years of racing, was glad to have Brzozowski among the competitors.

“I've been racing a long time and we all get along real good in the series,” Egbert said. “I'd much rather give someone my spare car to race, than to see them sitting at home.

“We raced for the title until the end of the season last year. Actually at the end of last season he thought he wouldn't have his car back together, so we were going to lend the car then. I'd rather race until the end and earn it, than have it handed to me. That's probably the biggest reason I did it. I wouldn't feel good about winning the championship because someone had bad luck.”

Egbert has been in positions before where he was loaned a backup car, so he’s just paying it forward.

“It was awesome that G.W. did that,” Brzozowski said. “We've raced side-by-side the last two years. We battled it out for points and always tried to help each other on and off the track many times. He's a good dude.

“That's something that's never happened for me before. I've only been piloting a Late Model for four years now. Just for him to trust me enough to drive his backup car, was a big deal to me. This was his primary car last year. I really appreciated it and I'd gladly do it for him if the situation was the other way around.

“This is what's so cool about this series. We'll go out and run each other as hard as we can door-to-door, but at the end of the day we'll still help each other out. We want the other guy to be out on the track and not have anything handed to us. We want to earn it.” — J.M. Hallas

Chris Ferguson’s slow start in his World of Outlaws Craftsman Late Model Series rookie campaign — no finishes better than 10th through the first eight series races — got a boost with his first top-five finish during May 3-5’s Southeastern tripleheader.

Ferguson’s solid three-race swing moved him into the points lead in the WoO rookie chase as he moved to ninth from 13th in the overall standings on the national tour.

The 28-year-old driver from Mount Holly, N.C., was 10th at Lavonia (Ga.) Speedway, fourth at Cherokee Speedway in Gaffney, S.C., and 12th at Senoia (Ga.) Raceway. He hopes to continue the upswing this weekend for Fayetteville (N.C.) Motor Speedway’s First in Flight 100, a $25,001-to-win event that’s among the richest on the WoO circuit.

“It’s definitely been an up-and-down start to the year, but we knew there would be good and bad nights when we made the decision to chase the World of Outlaws Series this season,” Ferguson said. “I feel like we are getting more and more consistent, and I’m really excited to head to Fayetteville Motor Speedway this weekend. I’ve had a lot of success there, and I’ve got a lot of fans and supporters there. Hopefully I can get the biggest win of my career in this weekend’s event.”

After more than 14 consecutive seasons together, Chub Frank has ended his run on the World of Outlaws Craftsman Late Model Series. Except for two races he missed because of injury, the 56-year-old driver from Bear Lake, Pa., has entered every tour event since the national series rekindled in 2004.

While he’s likely to compete with the series on a part-time basis, Frank’s full-time run ends with 16 series victories, the first April 23, 2004 at Lernerville Speedway in Sarver, Pa., and the last at K-C Raceway (now Atomic Speedway) near Chillicothe, Ohio on Aug. 22, 2009. He’s 10th in all-time series victories.

“The biggest thing is that I consider Chub more of a friend than anything,” Bachman said. “He’s the kind of guy you could always go to, no matter if it was something at the racetrack or personal. At the end of the race you could go to his trailer and have a beer with him and a good conversation. He was a hell of a racer, but he was always a great friend.”

Bachman, who began with the series as a pit steward in 2011, learned to maintain that relationship even when drivers and officials didn’t see eye to eye.

“When I first started this job, he started yelling at me about something at the track and I didn’t know how to take it at first,” Bachman said. “It was one of my first races I was ever at with the series, and it’s one of the things he’s always told me over the years, ‘I’m not yelling at you. I’m yelling at your shirt.’

Not just him, but any driver. They’re not yelling at you as a person; it’s just the shirt. You travel with these guys up and down the road, they’re like family to you, so we don’t get excited about penalizing someone. It’s one thing that comes with the job. Chub is just all around awesome. He’s a good buddy and friend to have.” — Kayla May

Series co-founder Justin Wells of Aurora, Mo., decided to put some retired Late Model racers in his car on the first-year Cash Money Super Dirt Series, but he’s decided he’ll drive the car himself this weekend at Legit Speedway Park.

“West Plains is one of my favorite tracks,” said the 41-year-old Wells, a two-time IMCA champion who finished fourth in his lone career Show-Me 100 start at West Plains, Mo., in 2006. “You want to race now and then, especially at Legit.”

Wells and his partner Ken Patterson put modified ace Johnny Bone Jr. in his No. 98 car last month, and hopes to put former Late Model regulars Larry Campbell and Bill Frye behind the wheel, too, later in the season.

Essary, who hadn’t raced regularly for a couple of years, is the kind of driver the series was aiming to draw, racers with older equipment who didn’t have tens of thousands of dollars to invest in a Super Late Model, but could be lured into competition if the price was right.

Tour officials have sold 37 sets of the modestly-priced shocks required for the tour, so “one of these days we’re going to have a heckuva car count,” said Wells, who hopes at least 25 entrants will compete Saturday at West Plains.

Wells will be part of the on-track action Saturday, but he’s “kind of enjoying this promoting” as he learns a different side of racing. Leaning on long-time racing mentor Ken Essary, who with Darrell Mooneyham’s brother Randy founded the MLRA tour nearly 30 years ago, Wells hopes the new series continues to build momentum.

“We’re never going to be Lucas Oil,” Wells said, “but you just can’t believe the talk and the people who are calling and buying parts.” — Todd Turner