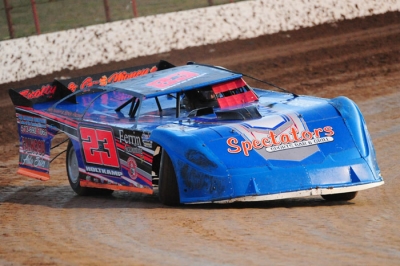 Cody Holtkamp got a few things figured out on his new Rocket Chassis last weekend during preseason practice at Lucas Oil Speedway in Wheatland, Mo.

"We worked out a couple of bugs and we were ready to go and try to make a good showing this weekend,” the 28-year-old Holts Summit, Mo., driver said.

But those plans for Holtkamp — and everyone else — were thrown a wintry curveball. Saturday's season-opening program at Lucas Oil Speedway was cancelled because of an awful weather forecast. While disappointed, Holtkamp tried to look on the bright side.

"Now we'll have another week to go back to the shop and do a little more work," Holtkamp said. "We'll do a couple of suspension adjustments and maybe get ahead in tire preparation. That takes some time and we'll try to use it to our advantage.”

Holtkamp has set a lofty goal in 2018. He wants to win the Lucas Cattle Company ULMA weekly title after finishing a mere two points behind Aaron Marrant a year ago.

Turn one of those runner-up finishes into wins, and it's likely that Holtkamp would have enjoyed the championship spoils instead of Marrant.

"We came close,” said Holtkamp, who spent two weeks crewing for Billy Moyer and Billy Moyer Jr. during the UMP DIRTcar Summernationals last summer. "Everybody called me 'Mr. Consistent' last year. We had several top-10s, top-fives and seconds. We just couldn't get it done" and win.

"Yep, that's my goal," he said when asked about the ULMA title. "I want to try and add that to my resume. Something that I can take into the future.”

Holtkamp has been racing Late Models for about four years after getting his start in street stocks. He’s excited to get into the new Rocket, hoping it's exactly what he needs to take the next step in his racing career.

"It's 10 years newer than what I had been running," Holtkamp said. "So it's 10 years' newer technology. Those guys (at Rocket headquarters) in West Virginia definitely do their homework. They know their stuff.

"I've just been in it one time so far so it's hard for me to tell about it so far, handling-wise. We'll get that figured out as the races come and we get some track time. I'm looking forward to it."

Holtkamp said he plans to mix it up in Super Late Model company a few times this season when he's not racing the Limited Late Model weekly shows at Lucas.

"Since we don't have any Friday races in the ULMA other than some special shows, we're going to go over into the St. Louis and Illinois area into UMP territory and race a little over there on Fridays," Holtkamp said. "We also have some special shows we'll attend and try to make the Show-Me 100. We were just a couple of spots away from making the Show-Me the year before last.

"We're looking forward to the new season. I'm blessed and lucky and couldn't do this without my dad (Joe Holtkamp) and brother (Tyler Holtkamp). They own the truck and trailer and Tyler is kind of like my crew chief. He calms me down if something doesn't go my way which, unfortunately, sometimes happens.”