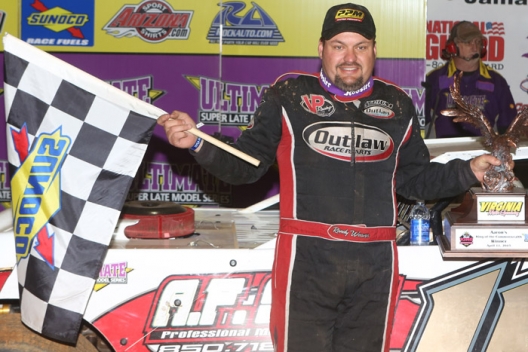 After extending his season-opening win streak to five with his biggest score yet — a career-high $20,000 triumph in Saturday night’s 60-lap Aaron’s King of the Commonwealth event at Virginia Motor Speedway — the 45-year-old driver from Crossville, Tenn., just continued to walk on air.

“The good Lord’s being real good to me right now,” said Weaver, who pushed his earnings for the young campaign to a cool $45,000. “I don’t know why, but I owe everything to him.”

The blockbuster Ultimate Super Late Model Series race was the biggest test yet for Weaver, who not only made his first-ever visit to the sprawling half-mile oval but also found a field laced with several accomplished national stars. But he simply dominated the program, registering the overall fastest qualifying lap, winning a heat race and leading the entire feature distance off the pole position.

No one seriously challenged Weaver, who kept defending race champion Jonathan Davenport of Blairsville, Ga., at bay following three restarts over the race’s final 33 circuits. Weaver built as much as a half-straightaway edge before flashing under the checkered flag 0.677 of a second in front of Davenport.

Scott Bloomquist of Mooresburg, Tenn., finished third after starting fourth and running among the top five for the entire race. Gregg Satterlee of Indiana, Pa., came on strong during the race’s second half to place fourth after starting 13th and Chris Madden of Gray Court, S.C., started and finished fifth but fell back to seventh during the middle stages of the event.

“Man, what a race car and crew,” said Weaver, who was victorious for the 14th time in 26 starts since debuting his fleet Chip and Rusty Stone-owned Longhorn Race Car last June. “I’m telling ‘ya, anybody in the grandstands can drive this thing. It about drives itself.

“This Longhorn chassis, everywhere we go … I mean, I’ve never seen this place, just heard great things about it, and I can’t believe my name’s in history down here now.”

Weaver experienced some momentary struggles when he first hit the unfamiliar VMS layout for the first time, but he quickly figured out the fast way around the oval. Considering that he came within a whisker of breaking the Super Late Model track record of 16.509 seconds established by Bloomquist at the same event one year ago despite busting a power-steering line during his qualifying run, Weaver’s prowess was unquestioned.

“I could tell I wasn’t hitting the right marks (during hot laps), but I was just trying to get focused,” Weaver said. “Then we rode out there (for time trials) I said, ‘Boys, get ready, because we’re fixing to set sail here. I hope it turns and everything works, but we’re gonna go for it.’

“Well, I said it in there (in turns three and four), and you go so fast here that it just loaded the right-front so hard down in there … and then I felt the (power-steering) line go. That was in the middle of three and four, and I’m wide-open. I thought, Oh, no, but I glanced and I noticed none of my gauges was flashing so I knew my pressures were good was, so I held ‘er down and wrassled it on to the flag. I’m glad I did because that was our fastest lap (16.518 seconds).

“When I came in they said, ‘Well, you missed the track record by 9/1000ths or whatever,’ so I’m thinking, Man, I wish that power-steering line wouldn’t have broke. That would’ve been a real clean sweep to come in your first time (to VMS) and set a record, win a heat and win the feature.”

The only other true worry Weaver had during the night came on lap 46 when his car noticeably bounced rounding turn four as the race’s final caution flag flew. He had gotten into a precarious position while negotiating lapped traffic and briefly thought he had inflicted significant damage to his machine.

“I just had slid that lapped car who was racing me real hard,” Weaver said. “Yeah, we was faster, but you can’t afford one bad corner to burn them tires up and hurt ‘em because it’ll kill you out on the straightaways, so I showed him a nose three or four times. But finally I just had to pull a slide-job on him. Well, right when I done that they hollered, ‘Caution’ (over the one-way radio), so now I’m trying to check up and it’s choppy down there (on the inside of turn four) and man, I started bouncing. I thought, Oh my gosh, I’ve knocked the tires off this thing.

“At that point I was like, ‘Lord, just help me right here because I need it.’ Then those laps just clicked right off after that, so I knew it was working good.

Weaver was so confident in his race car, his team and his talent, he simply ran a race of his own.

“I was just watching my guys (signaling from the infield),” Weaver said. “We was just riding and saving tires … it’s just fun to drive that thing right now.

“I mean, we really didn’t even know about tires. We was about to put on the wrong tires when we were going back-and-forth, but I said, ‘Heck, let’s just do what we do. And if we don’t win … guess what? We’ve lost one this year.’ So the pressure just ain’t there like most people think it is.

“It just seems like we can’t mess up,” he concluded, shaking his head in amazement over his spectacular run to kick off ’15. “I’m sure it’s coming, but right now we’re just gonna keep riding it.”

Davenport, 31, certainly stood in awe of Weaver’s performance. He was the only driver who even sniffed Weaver’s fumes, but he couldn’t summon enough speed in his own Longhorn mount to stop Weaver’s streak.

“He’s fast — you can’t take nothing away from him,” said Davenport, who started third. “He’s good right now. Good thing he’s in a Longhorn car … which kind of sucks for me, but good for him.”

Davenport, who stopped by Weaver’s hauler to offer his congratulations after the race, was satisfied with his runner-up finish in a race that was really a last-minute addition to his schedule. He would have skipped the event if a conflicting Lucas Oil Late Model Dirt Series show at Jackson Motor Speedway in Byram, Miss., hadn’t been canceled due to wet conditions on Thursday.

“We just didn’t get to Randy fast enough,” Davenport said. “Me and (outside polesitter) Mason Ziegler (of Chalk Hill, Pa.) were racing side-by-side (for second early in the distance) and when I tried not to pinch him off he got ahead of me. I finally said, ‘It’s time to go,’ and I slid him (to gain control of second on lap 10). I apologized to him when I got back here (in the pits) because I had to slide him, but that’s what I had to do because I knew the track was getting one-lane.

“We closed in a little on Randy a couple times. I think he might’ve been a little better on short runs and I was a little better on long runs, but you never know … he could have been slowing up trying to save tires. It’s always easier to run in on somebody running second, so we’ll just be happy with second. We didn’t tear anything up, we learned some things and we finished second to a guy who’s real hot right now.”

Notes: Three caution flags slowed the feature. Kyle Pierce of Statesville, N.C., stopped in turn four on lap 27 due to an overheating engine; Don O'Neal of Martinsville, Ind., slowed with a flat right-rear tire on lap 30 (he pitted and returned to finish 10th); and Earl Pearson Jr. of Jacksonville, Fla., stopped in turn two on lap 46 while running fifth and retired from further action. … Weaver registered his fourth career Ultimate Series victory and second this season following a March 28 success at Smoky Mountain Speedway in Maryville, Tenn. ... The 60-lap feature rolled on the track at 10:55 p.m. ... Ultimate Series points leader Casey Roberts of Toccoa, Ga., slowed six laps into the third heat because his car’s engine soured. He brought out his second car to start the feature using a provisional and drove it forward from the 23rd spot to finish sixth after briefly climbing as high as fifth. … Mike Marlar of Winfield, Tenn., started eighth but slapped the outside wall in turn two on the first lap, damaging his car’s right-rear corner and forcing him to retire on lap eight after falling deep into the field. … With the cancellation of the conflicting Lucas Oil Series event at Mississippi's Jackson Motor Speedway, tour regulars joining Davenport at VMS includes Bloomquist, O’Neal, Pearson and Steve Francis of Ashland, Ky., who briefly reached second place with a lap-27 restart pass of Davenport but faded to seventh at the finish. … The Aaron's King of the Commonwealth event was the richest event in Ultimate Series history. The tour will return to VMS for the $10,000-to-win USA 100 on May 16.