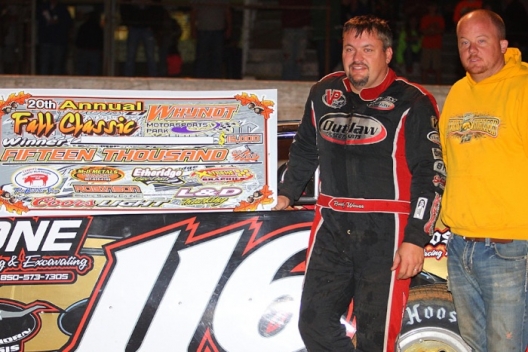 The outside front-row starter got the jump on polesitter Dane Dacus of Arlington, Tenn., at the outset and turned back challenges from runner-up Chris Simpson of Oxford, Iowa, to capture the unsanctioned special at the 3/8-mile oval just south of Meridian.

In his second trip to Whynot following a 2012 victory on the Southern All Star circuit, Weaver steered to his 10th victory of the season, piloting the Longhorn Chassis that carried him to a perfect July and a strong second half to the season after a mid-season chassis change.

“This is the second time I’ve ever been here, and somehow we’ve lucked up and won both of 'em. It’s getting to be one of my favorite places,” Weaver said in victory lane. “I really like coming down here. I just wish it was a little bit closer.”

The seventh-starting Simpson, Friday’s fast qualifier among 48 entries, pulled alongside Weaver a few times but couldn’t quite make the pass in settling for his second runner-up finish in a major Mississippi event in October.

Third-starting Bub McCool of Vicksburg, Miss., fell back early but charged back to finish third while Mike Marlar of Winfield, Tenn., rallied from the seventh row to finish fourth. Former race winner Billy Moyer of Batesville, Ark., ran second early and rounded out the top five.

Weaver’s No. 116 ran the extreme outside line on the racetrack most of the way, a rarity for the Tennessean.

“Most people know me, I’m usually the guy on the bottom hunting the slick (surface) and all that,” Weaver said. “I looked once and there’s that (Shane) Clanton down there, and I’m up where he usually he. That wasn’t the easiest line to run, that wasn’t where I wanted to be, but just our tire choice, we was a little bit different, and I don’t know, probably just the car.

“We just couldn’t stop and get slowed down enough and I felt like I could carry speed off the corner. I looked at that cushion earlier and I thought, 'Man, that thing’s pretty wide.' We were getting it a little thinned out, but every time I could hit it right — which wasn’t very often — I could really feel us get a run down on the straightaway.”

Simpson, who also had a mid-season switch to a new chassis in his Club 29 Car,  hoped Weaver would be vulnerable in the high groove, but he couldn’t quite find a way past.

“He was kind of living up on that edge. I know them Longhorns a little bit, so I knew he had to be up on that edge,” Simpson said. “I could stay off that edge and I felt like I had a smoother line, but I’d go in (the corners) and get a little shove on that right-front, the right-front would just stop steering. I just couldn’t diamond it and keep the car straight enough to have enough drive to get off the corner.”

Weaver knew he had his hands full when he saw Simpson’s No. 32 a few time.

“That Simpson guy, since he switched cars, he wasn’t bad before, but he’s been really good,” Weaver said. “So when I saw him down there, too, I just thought, 'Well, I’m committed, hopefully it’ll just work out for me.' The lapped cars done great, the guy’s with the flag. It was just our night. Any time you can even run with these guys, (not to mention) outrun 'em every once in a while, it really says a lot for your race team.”

Simpson said his chances were over in the final 10 laps when he gave up ground after contact with a lapped car exiting turn two.

“I got to him and then (Chris) Wall, Wall tried to diamond (a corner) and ran right into the side of me and it just kind of broke my momentum there,” Simpson said. “I was going to do whatever I could to get a win. I don’t like running second, but it’s good money to go home to, too.”

McCool, the best home-state finisher and frequently strong at Whynot, turned up the wick in the race’s late stages to get third place after trying to conserve rubber.

“I knew they were all on harder tires than me, and towards the middle point of the race I knew I was going to have to take care 'em if I was going to be there at the end,” McCool said. “That’s what we did. I saw lap 70 pop up and we started driving it as hard as I could. I thought we was catching 'em a little bit, then I drove it into the fence down here.”

Weaver’s tradition in 2014 has been bring his trophies home to his father, who has been battling cancer and unable to see his son race most of the season.

“This one’s definitely for my dad. I will drive all night and take this trophy to him,” Weaver said. “Everything I do is for him.”