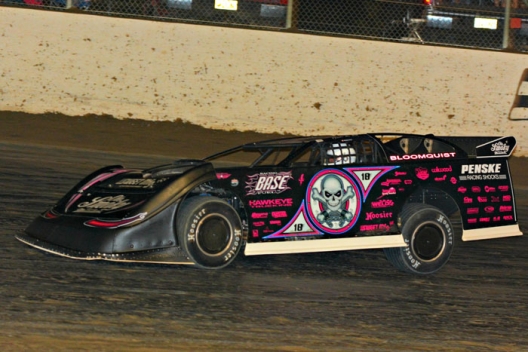 COLUMBUS, Miss. (Oct. 11) — From the moment that Scott Bloomquist first took to the track at Magnolia Motor Speedway over the weekend for the annual Magnolia State Cotton Pickin’ 100, many of his competitors figured he'd be the driver to beat for the $20,000 top prize. He proved them all right Saturday night by leading all 100 laps from outside the front row to win one of Mississippi’s biggest dirt races.

“We’ve just been working so hard on this car over the past several months, and it’s really paying off,” Bloomquist said with a smile in victory lane. “Whether it’s here, Eldora, Knoxville, Brownstown, or anywhere else this car is just incredible.”

Polesitter Jack Sullivan and Bloomquist led the field to the green, and Bloomquist immediately took command with Billy Moyer Jr., Sullivan, Simpson and Weaver in tow. With a blistering paced at the front of the pack, Mooresburg, Tenn.’s Bloomquist found himself in lapped traffic by the seventh circuit as Simpson worked up to the third spot and began to pressure Moyer Jr.

Simpson disposed of Moyer Jr. on lap 27 for the second spot, and the Iowa competitor tried to track down Bloomquist, who held a straightaway lead. While Simpson tried to make up ground, Marlar found his way into the fourth position on lap 41.

The first caution flag flew on lap 51, when Jared Landers spun in turn two after contact with Eric Jacobsen. Just past halfway, Bloomquist led Simpson, Marlar, Moyer and Weaver. If competitors hoped the caution would give them a shot at Bloomquist, they would soon be disappointed as the restart found the driver of the Sweet-Bloomquist Race Car motoring away from his foes.

The second and final caution flew on lap 80 as Brian Rickman slowed on the frontstretch. While Bloomquist again drove away from the competition on the restart, great battles waged throughout the pack as Simpson and Marlar went door-to-door before Simpson disposed of Marlar in the closing laps for the second spot.

Bloomquist crossed the finish line nearly five seconds ahead of Simpson and Marlar.

“This car would go absolutely anywhere that I wanted it to go in the feature,” commented Bloomquist. “I want to thank all of my sponsors and crew for their incredible support. They’ve stood behind me all year, and have never given up.”