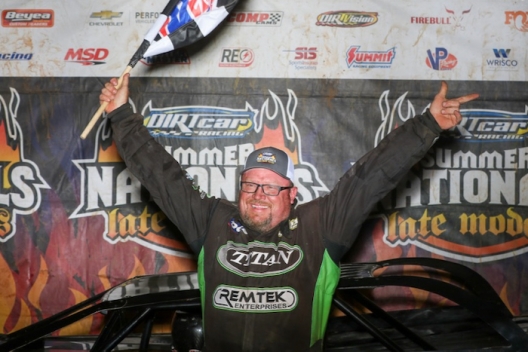 Brendon Bauman/brendonbauman.com
Jason Feger celebrates his first tour victory since 2020.
What won the race: Holding off a relentless low-side charge from Shannon Babb over the final five laps, Jason Feger captured Sunday’s $5,000 DIRTcar Summer Nationals victory at Lincoln Speedway. In a race where Bobby Pierce led 33 laps but was penalized for contact that spun Ryan Unzicker as they battled for the lead with Feger, the Bloomington, Ill., driver led the last eight laps and repelled Babb by a half-second margin at the checkers.
Quotable: “I gotta thank (Shannon) Babb there, he ran me pretty clean. He was open for a slider and he didn’t take it,” Feger said. “But man it was a heck of a race. I don’t know, I got into a lapped car pretty good with the right rear that first time I passed Bobby (Pierce) and let him get the lead back and I don’t know if I tire was going down or what or bent a shock or something, but it never felt the same after that.”
Key notes: Feger won his first Summer Nationals race of the season and 22nd of his career. ... His previous victory came Aug. 22, 2020 at Merritt Speedway in Lake City, Mich. ... The quarter-mile Logan County Fairgrounds oval hosted the Summer Nationals for the 16th time. ... Brandon Sheppard of New Berlin, Ill., won last year's visit. ... With cancellations at Charleston (July 5) and Fayette County (July 6), the series is off until July 7, the tour’s longest break of 2022. ... This year marks just the 12th time in the tour’s 37-year history that there will not be a race held on Independence Day. The last time was 2020. … There have been 16 events in 19 days without a rainout thus far.
On the move: Tommy Sheppard Jr., of New Berlin, Ill., started 11th and finished sixth.
Winner's sponsors: Feger’s Longhorn Chassis has a Pro Power engine with sponsorship from Titan Industries, Hoker Trucking, Floyd’s Waste Systems, Digital Copy Systems, RLM Enterprises, Rosser Battery, Remtek Enterprises, Speedwerx, Cheap Cars and Griffin Signs.
Points chase: After Lincoln: 1. Bobby Pierce (1,050); 2. Brian Shirley (972); 3. Jason Feger (950); 4. Payton Freeman (756); 5. Ryan Unzicker (717); 6. Joe Godsey (707); 7. Dennis Erb Jr. (590); 8. Mark Voigt (572); 9. Shannon Babb (542); 10. Logan Martin (511).
Current weather: Clear, 81°F
Car count: 21
Fast qualifier: Shannon Babb
Time: 13.336 seconds
Polesitter: Bobby Pierce
Heat race winners: Shannon Babb, Brian Shirley, Bobby Pierce
Next series race: July 7, Macon Speedway (Macon, IL) $5,000
Editor's note: Results and race details are unofficial.

LINCOLN, Ill. (July 3) — Updates from the 16th round of the DIRTcar Summer Nationals at Lincoln Speedway, an event highlighted by a $5,000-to-win feature for Super Late Models (results unofficial):

Holding off a relentless low-side charge from Shannon Babb over the final five laps, Jason Feger of Bloomington, Ill., won Sunday’s DIRTcar Summer Nationals stop at Lincoln Speedway. Feger, who hustled the high side for most of the 40-lap main event, stayed there in the waning laps despite Babb’s pressure. Babb, of Moweaqua, Ill., eased ahead on the final lap, but Feger drove back around in the outside as the two approached a slower car exiting turn four. He finished a half-second ahead of Babb to earn a $5,000 payday and his first Summer Nationals win of the season.

Feger took the lead on lap 33 when Ryan Unzicker of El Paso, Ill., spun in turn four after contact from race-long leader Bobby Pierce of Oakwood, Ill. Pierce went from first to third as Unzicker and Feger shuffled him back. Unzicker nosed ahead in the bottom but spun before the lap was complete and never officially led a lap. Pierce was charged with the caution and went to the tail with Unzicker for the final restart.