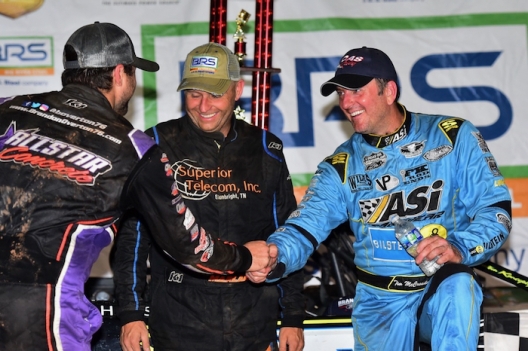 On Saturday night in the Firecracker 100 finale Lernerville Speedway, McCreadie not only returned to prominence in the big race department with flash, but with firepower, too.

In a race he led all 100 laps from the outside pole, McCreadie secured his first paycheck of $50,000 or more in nearly two years by winning Lernerville’s crown jewel race over reigning event winner Brandon Overton.

The last race McCreadie won of that magnitude monetarily-wise had been the North-South 100 at Florence Speedway in Union, Ky., on Aug. 15, 2020.

“We’ve run a lot of top-fives — a lot of seconds — the last year-and-a-half without getting one of these big ones,” said McCreadie, taking his fifth overall win of the season, three of those now with the Lucas Oil Series. “We were close at (the) Eldora (Million). A couple of the XR races we’ve been good at. Finally, here we are.”

Overton, hungry for his first big paycheck of the season, on the other hand, gave McCreadie all he could handle down the stretch.

McCreadie crossed the finishing line just 0.459 of a second ahead of Overton, who in the final laps gave the impression that he had something up his sleeve.

McCreadie’s comfy lead that spanned more than two seconds with 10 laps to go evaporated in large part to a slight misstep in traffic, which allowed Overton to close in.

“I made a big mistake coming down to two to go in three and four and kind of just sat there,” McCreadie said. “Hudson (O’Neal) and (Chris) Ferguson were running side-by-side in front of me, and what Ferguson was doing … he didn’t know I was there, but he was arcing out and coming down the hill and it would kind of affect me a little bit.”

On the final lap, Overton entered turns one and two with the game plan of cutting off the cushion and rolling down the banking to perhaps generate the race-winning run and pass of McCreadie. But McCreadie, knowing Overton had been right behind, used the slower car of Hudson O’Neal as a proverbial pick, heaving his Longhorn Chassis underneath O’Neal into turn one.

“If Hudson wouldn’t have been there I could’ve entered higher (in turn one) and maybe (McCreadie) would’ve slid himself and I could’ve got a run,” Overton said. “But he went below Hudson, and where Hudson was at is where I needed to enter to come back down the hill. So I was kind of screwed. All I could hope for was he’d go in there and really blast it and slide way up, but he didn’t.

“It was just whoever hit the traffic right. He did a good jo. He slid ‘em when he was supposed to slide ‘em, and when I got to ‘em it just didn’t go right.”

“He’s good. He’s raced long enough and knows what he’s doing, so we just run second. It didn’t go our way, but our car’s not bad. We had a good night.”

During the first half of the 100-lap affair, McCreadie had to worry most about polesitter Brandon Sheppard, who stayed within a second of McCreadie until lap 24.

“On the start, when I was still at (Sheppard’s) number going down the front stretch, I knew he saw me and I thought he might slide me,” McCreadie said. “But he probably thought it didn’t really matter who was leading early, and so I just bent it in there and when I cleared him off of two I tried to stay in my lane. I kept seeing his nosepiece beside me and I thought, I gotta try to get in the infield maybe in three and four and see if it’s better.

“I struggled a little, but it was me making mistakes. Then once I got that right a few times I saw my signal guy getting wider with the sticks, and I thought, OK, I’m doing this right, and I just kept trying to be smooth and not buzz the ends of this thing in the first 30 laps because they has watered and tilled it (before the feature).

“Then, all of a sudden with like 20 to go, I started struggling a little with lapped traffic. I couldn’t just arc out wide and diamond the corner right, and then I saw the sticks getting closer and I thought, Gosh, if I give this thing up.”

The race had been slowed twice on laps 44 and 57 for Tyler Erb and Spencer Hughes, respectively, and fortunately for McCreadie his sizable lead provided a bit of insurance amid Overton’s late-race scare.

“Coming down to the white I finally got a run on Hudson and I thought, I need to be able to shoot the gap and hopefully he sees me,” McCreadie said. “And if he can cut me a small break off of two and not still be on my quarter-panel, maybe it’ll affect Brandon because Brandon couldn’t swing wide and keep his momentum up. And when I went down the backstretch the sticks weren’t completely tight together so I thought, Well, fire it in hard through the middle and try to keep it up on the radius rods and hope for the best. It worked out.”